Burlesque performer and fan dancing extraordinaire Jezebel Express once shared her realization that "sexy is a set of skills." While I wholeheartedly believe this, I think it extends beyond sex appeal. Pretty, too, is a set of skills.

In a recent conversation with high school girls about body image, several spoke up about their own preferences in females (specifically ones they might be attracted to) -- for them to wear no makeup. I couldn't help but think of this comic by Alexandra Dal: 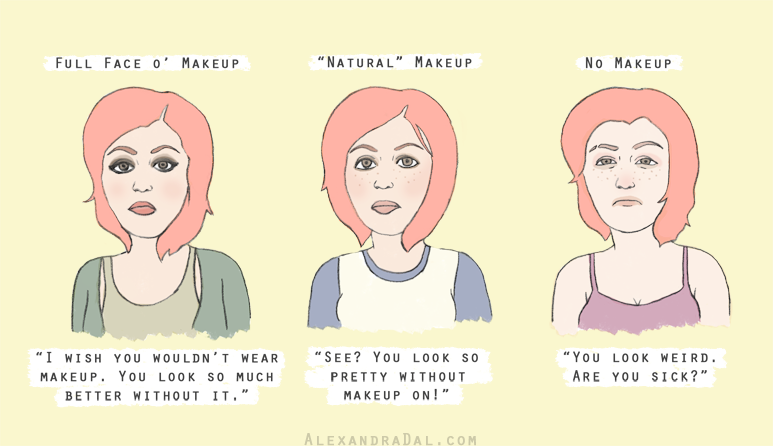 My friend Caroline would always say that people would ask her if she was sick when she didn't have any makeup on, and I had a hard time believing her until I crashed at her place and found myself asking her the same question in the morning. The "natural" look is not natural at all, as evidenced by the copious amounts of "no makeup" makeup tutorials on YouTube. It is rare that a woman without any makeup at all is complimented on her looks. (A cat call is not a compliment.)

Pretty isn't about how my face happens to look due to my genetic makeup. Pretty is about what I do with that, about my skills in the makeup department. Finally mastering the art of the false lash, I've noticed that the longer the pair I don, the more compliments I garner. "You're so pretty!" "It's just these lashes. They're amazing!" We learn how to apply eyeshadow and mascara. We learn how to use concealer, lotions, foundation. We master the liquid eyeliner cat eye, we pluck or get our brows shaped to both complement our features and appeal to the fashions of the times. We gloss our lips up, and when we feel daring, we paint them red.

But it doesn't stop with makeup. Pretty is also about hair. When I was in middle school, it was fashionable to have long, straight, shiny hair. My hair is naturally curly, but I hadn't had a proper haircut until I was 12 so I hadn't realized it was anything more than wavy. I was determined to get my hair to be just as beautiful as the popular girls at school, so I stood at the mirror in the morning blow drying my hair with a barrel brush. I looked like Alice from Dilbert. I achieved the straight part, but I had terrible triangle hair.

It wasn't for a few years that I learned what products to put in my hair to work with it and not against it, to emphasize its desirable features while hiding frizz and puff and other unsightly characteristics. A suitable cut can also affect "pretty." I found, rocking a shoulder length curly 'do during my sophomore year of college, that my hair made me feel pretty enough that I didn't need to put any makeup on. I also found, rocking a shaved head during my senior year of college, that my lack of hair necessitated an increased amount of makeup, as well as large jewelry. There is a certain level of "pretty" that I feel comfortable expressing myself with, and changing my hair up created a need to find balance.

Pretty is also affected by dress. It's a pain in the ass to find clothes that fit nice, especially pants. The low rise pants, that have been fashionable since I've been of age to shop for them on my own, squeeze my fat in a decidedly un-pretty fashion. I have learned that certain cuts of dresses look more pretty on me than others. My body looks best in dresses that are fitted from right below the breast to just below my belly button. I have also learned the trick to getting a more "pretty" boob-belly ratio: wearing a push up bra. Heels are uncomfortable, but they make most every outfit a bit more pretty. It's remarkable what a change a pair of heels will make to a tank top and leggings when compared to a pair of running shoes.

Posture makes pretty. A world of body woes can be washed away by learning to properly stick your boobs and butt out, put your shoulders back, and your chin up.

Pretty is artifice. Pretty is a construct, and a social construct at that. Pretty can be fun to do, to learn, to practice, to hone; but pretty can also be damaging. When I worked at Ben & Jerry's during undergrad, I noticed that on days I wore makeup, people were nicer to me. Our society ascribes value to women based on how well they've achieved this artifice to suit current trends and values. A woman's appearance is often discussed before or / and more than her personality, beliefs, passions, or achievements. Especially when those passions and achievements have nothing to do with creating this artifice.

Women are constantly down on themselves, comparing their mental image of what they look like in the bathroom mirror in the morning to what other women look like fully costumed in Pretty with pretty lighting and pretty scenery to boot. I recall a friend wallowing in sorrow and cyber stalking the new girlfriend of her ex. As she clicked through MySpace photos (this was quite a few years back), she would complain to me that she was ugly and his new girl was beautiful. I had to point out to my friend that this girl had scores of makeup on. She, too, could put makeup on. This girl was not better than her.

I love this example from Philly burlesque performer Hayley Jane. 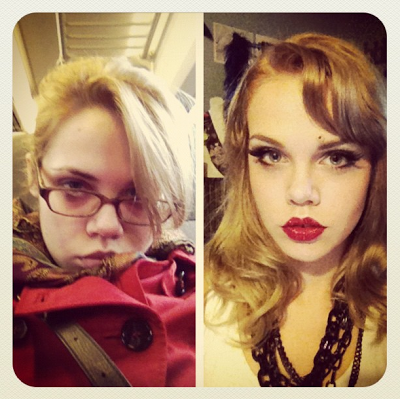 Pretty is like good design. It is a skill, or rather, a set of skills. You may be attracted by the aesthetic, but, like wandering through Target and picking up beautiful kitchen gadgets of whose function you're wholly unaware, it is important to remember that such artifice holds no intrinsic relationship to the value of the person, or the gadget, it adorns.

Emily Armstrong is
This piece originally appeared on Bitchtopia.com.