The "Pretty Little Liars" Season 4B finale left viewers with dozens of answers -- the episode title was "Ali Tells All" -- but with just as many questions. "People were really getting desperate for answers," showrunner Marlene King told HuffPost TV. "It felt like good timing."

Throughout the episode, which was set in New York City, Ali filled the original liars in on what exactly happened the night she went missing, and who buried her. (Beware of spoilers, "Pretty Little Liars" fans!) As the hour unfolded, we learned Spencer had no part in Ali's disappearance, but Mrs. DiLaurentis knew who hurt Ali. She saw her daughter get clobbered with a rock, but then buried her alive in order to protect someone else. As the truth came out, Ezra took a literal bullet for the girls and karma came around to get the best of Mrs. D.

King has noted before that the finale sets the wheels into motion for next season, which will debut this summer. "Season 5 will pick up very much where we left off, with the girls on the rooftop in New York screaming for help," King said over the phone. "We'll see more character development. The five of them together again makes it very intense. It's going to be a very intense, intriguing season."

Below, King answers all our burning questions about Season 4B's finale, including if a certain deceptive English teacher survived.

Mrs. DiLaurentis is covering for someone and it seems like the go-to person would be Jason. But, is it that obvious?
You know, in Rosewood I think the theme is that things aren’t always as they appear to be. It’s a theme we constantly explore. The Jason of it all is something we look into as soon as we get back to Season 5. Those girls are smart people. Even Hanna’s been reading mystery novels. They really haven’t had a chance to breathe. They’re on the rooftop and A is shooting at them, but when they come back and have time to process Ali’s story, that definitely seems to be the first place they go.

The moment where we see Mrs. DiLaurentis in the grave, we can’t really assume she's dead. Will that also be dealt with right away?
Well she seems to be dead, right? It seems as if karma is fit that someone is burying her. We pick up that story right where we left off this summer. 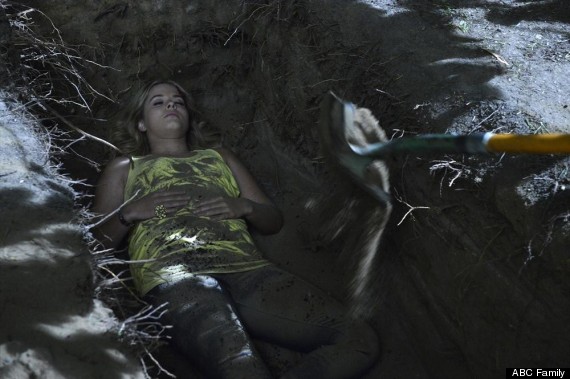 One of the craziest scenes was on the roof when Ezra came to the rescue.
That’s all going to come out in the season premiere. It feels like a big extension of the finale. It’s this big, bold episode and a lot of the story will come out. Some people caught this last night and some people didn’t. The girls aren’t in Philadelphia, they’re in New York. That is the New York skyline that we show. A lot of people didn’t catch it last night, but you see the Empire State Building.

That’s where Ali has been hiding out?
She’s definitely there right now. I’m starting to realize people don’t know the girls are in New York.

Which means Ezra and A had to follow them there …
Correct!

Will we see Ezra next season?
You’ll see him tomorrow at a table read. It’s not a huge mystery. Fans will find out as I’m sure people will be Instagramming and tweeting that Ezra’s at the table read.

In the beginning of the episode, Ali said Noel has secrets too and that’s why she trusts him. What kind of secrets is she alluding to?
That will play out in Season 5!

I read that you call him Whack-a-Noel. What’s the significance there?
He just pops up. Since Season 1 he pops up in the oddest places at the oddest times. Ali doesn’t trust a lot of people and here she is in New York with Noel Kahn. It’s not a small deal. And he’s giving her a passport, money and a plane ticket.

Marlene King Explains The OMG Moments Of 'Pretty Little Liars' Season 4B Finale
Women Who Kick Ass on TV
1 / 27
Daenerys Targaryen, ‘Game of Thrones’
<em>"I am Daenerys Stormborn of House Targaryen, of the blood of Old Valyeria. I am the dragon's daughter, and I swear to you that those who would harm you will die screaming." </em>
Everett Collection