There is a fantastic group show at Paul Kasmin Gallery in Chelsea, organized by Eric Parker and KAWS. In addition to the curators, artists include Todd James, Tony Matelli, Joyce Pensato, Peter Saul and Karl Wirsum. This show kept surprising me. What first grabbed me were the big-color, cartoon and pop inspired paintings of Parker, KAWS, James, Saul and Wirsum. But there's also a great signature black and white Mickey Mouse painting by Pensato and a Matelli, I-can't-believe-that-is-cast-bronze, meat-fest sculpture. I was lucky enough to have some questions answered by Paker and KAWS.

What came first, the title or the show?

KAWS: The show came first, we had an idea of putting this show together for a while and after we finalized the artists and knew some of the work we were getting for the show the title just kinda fell in place.

Eric Parker: Thats right, the show came first. I feel that the coming up with the title was a little tougher. The title was locked down while having dinner one night in Brooklyn. We were bouncing ideas back and forth and Kaws just said it, and it stuck.

I love the inclusion of Joyce Pensato's black and white aggressive paintings of cartoon characters and Tony Matelli's sculpture of rotting meat as counter points to the high chroma work that surrounds them. What moved you to include them in the show?

K: I think they really balanced the show out and we are big fans of both their work. I love the energy in Joyce's work and putting her next to Tony's sculpture you get to see to very skilled approaches to controlling an image.

EP: We were thrilled to get such amazing examples of their work! Their work brings an entropic demeanor into the show. I think it's safe to say that, the other work in the show focuses on the building up of an image and their concerns are primarily about deconstructing it but, in a pretty way.

Could you safely say this show consists of your major influences, peers and other artists whose work you feel an affinity to?

K: Absolutely, we put this show together as an excuse to put a lot of the artists we feel somehow connected to in one room.

EP: For sure, We have been fans of these artists for years. I was really excited to see all the Karl Wirsum paintings because he hasn't exhibited paintings in New York for well over a decade. I also, enjoy seeing all of Todd James's work in the same space with this epic Peter Saul painting that we were so lucky to get.

Erik, what is your process like? Is it highly planned or is there room for intuitive choices along the way?

EP: Its a little bit of both. Right now I am making a series of still-lifes and large scale jungle scenes. I plan those out by pulling from the hits of art history and then mixing my drawing language into the fold. I leave about 20 % open for intuitiveness.

Brian, I remembered ex'd out eyes from Warner Bros. cartoons when I was a kid. Is that where you first saw them? What was it about them that hooked you?

K: I'm not sure of my first encounter with ex'd out eyes I feel like it's something that's just always existed and I think that's what I like most about it.

Todd James is in the Art In The Streets exhibition at MOCA. At your opening we talked about his disappointment in the Brooklyn Museum for it's lame decision to not carry the show. Any thoughts on that or street art in general?

K: I haven't really thought about it much. Street art will survive with or without a museum giving it a thumbs up.

EP: I was bummed when I heard about that. I really wanted to see the Rammilzee room!

PHOTO GALLERY
Pretty On the Inside at Paul Kasmin Gallery
Download
Calling all HuffPost superfans!
Sign up for membership to become a founding member and help shape HuffPost's next chapter
Join HuffPost 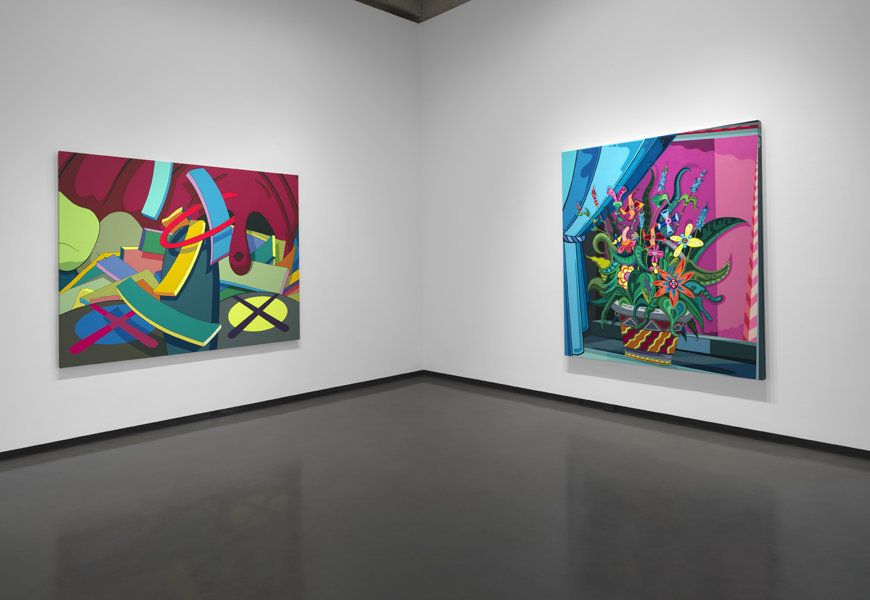