On a recent trip to Cuba I determined to find out how that country manages to have an infant mortality rate well below that of the U.S., with dramatically fewer resources than we have. It defies logic, but in spite of its poverty Cuba demonstrates remarkably good health outcomes, particularly for infants. The most recent estimates show the Cuban infant mortality rate (IMR) to be 4.7 per thousand infants born alive, on par with much wealthier countries like Canada and New Zealand. That rate is significantly lower than the current U.S. rate of 6.2, much lower than the average IMR of 15 for other countries in the Latin America/Caribbean region. How did this happen?

As a public health professional, I know that the death rate for children under one year of age is a classic indicator of the health of a population. Not surprisingly, it's strongly linked with national incomes. This year's UNICEF report on The State of the World's Children lists basic economic and health facts for every country, and that relationship is easy to see. For example, Norway has an estimated gross national income (GNI) of over $100,000 a year and an infant mortality rate (IMR) of 2 deaths for every 1000 infants born alive. In contrast, the countries of sub-Saharan Africa have average GNIs of around $1700, and average infant mortality of 61. Poorer countries nearly always have worse infant health.

Except when they don't.

Cuba is a very poor country by most measures. The per capita gross national income (GNI) is around $5900 USD a year, but the actual average income of most Cubans is much lower, with government salaries typically $300 to $500 a year (in addition to basic food rations provided to everyone). In the US, the average national income is $53,700 when last estimated. The economic disparity between Cuba and U.S. is huge.

I left on this trip knowing only the basic facts about Cuba. The revolution in 1958-59 overturned the despotic regime of Fulgencio Batista. From the beginning, the new government focused its public efforts on providing free, high quality education and health care for everyone. Within a few short years, literacy increased to essentially 100 percent, where it stands today. The new health care system trained thousands of primary care physicians, around half of them women, who were placed in communities as family doctors to assume care for the small populations that lived around them. Home visits are an important part of those services.

Cuba's 100 percent literacy is a possible explanation for its good standing in health, since literacy, particularly maternal literacy, has very important benefits for child health. But other nations with virtually universal literacy, such as Tajikistan and other countries of the former Soviet Union, have infant mortality rates five to ten times higher than Cuba's. Education alone, although a powerful factor in producing health, doesn't seem to be the explanation.

Cuba's universal access to health care is another likely reason for its good infant health. A common measure of how well a health system serves everyone is immunization coverage: what percent of children get the basic childhood vaccinations? But again, a number of the same high-education countries in Eastern Europe had nearly universal coverage, so that doesn't fully explain the differences either.

Something about the commitment of Cuba's post-revolution government to health care was eluding me. Then I looked at the proportion of public spending that was allocated to health purposes for a range of countries, and began to see a clearer picture. Nearly all the poor countries of the world allocate only 2 or 3 percent of their GNP for public health, while the most highly developed countries spend 7 to 9 percent. In Cuba that figure is 10 percent: one out of every ten dollars produced goes for public expenditures on health. That commitment is not just for the benefit of Cubans. In addition to training doctors for their own population, the Cuban medical system trains hundreds of doctors from other countries. It sends medical brigades to countries with urgent need, such as following earthquakes and for the Ebola crisis in West Africa. As many as 15,000 Cuban doctors are now serving outside the country. 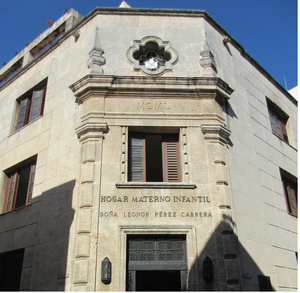 This full-on commitment to health was mirrored in what we heard and saw about care for pregnant women and newborns in Cuba. The community-based doctors pay close attention to pregnant women under their care, making sure they receive extra food rations. If a home visit reveals problems of either a social or medical nature, the women are offered a bed in a maternity home for as long as needed, and are provided with rest and special food. Essentially 100 percent of deliveries are a hospital or clinic.

After an infant is born, the community doctor makes regular home visits to assure the baby is healthy and growing well. Sick babies are provided referrals to specialists, if needed. And the uncommon event of an infant death is taken extremely seriously, with the investigation as to the causes reviewed at the very highest level in the Ministry of Health. If the attending physician is found to be negligent in care of an infant who dies, he or she might even lose the license to practice medicine.

Cuba has healthy infants because the health system and those working in it actually care about them. Despite a range of serious political and economic problems that Cuba still faces, its attention to the basic needs of the population was reflected in much of what we saw, even as casual observers, in our short time in the country. Homelessness is virtually nonexistent. With very rare exceptions, everyone looked well dressed and adequately nourished, with sufficient resources to maintain their self-respect.

At the national level, Cuba has the political will to assure that pregnant women and their offspring thrive. Can we learn anything from Cuba? What prevents the United States from demonstrating this same concern?