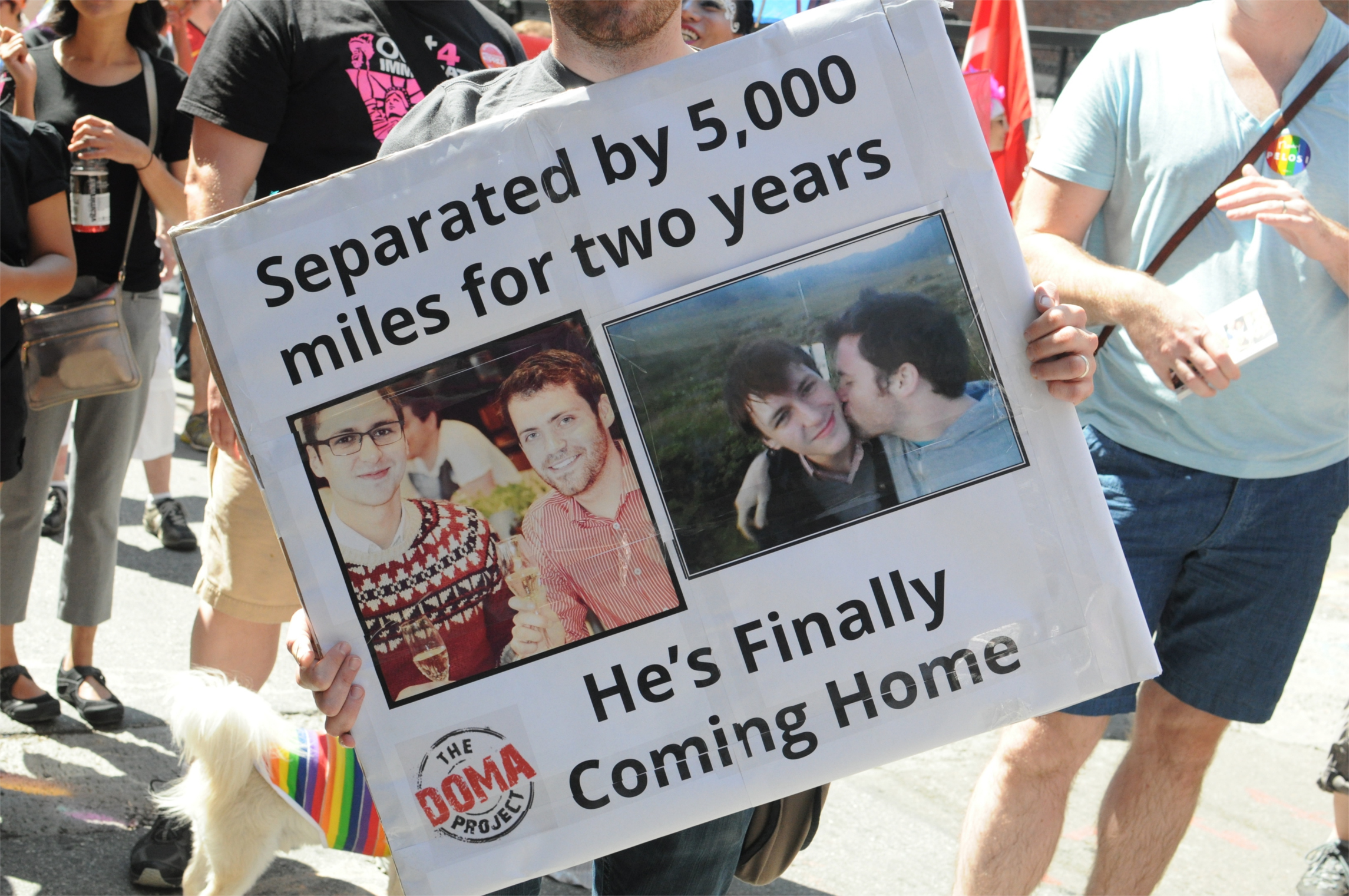 Matts sign about his husband stuck abroad (though not much longer)

"It means that we can now get married, I can apply for his green card and we can be together forever. It was a big big worry for us for years... For a lot of us, it's like waking up and realizing that we can fight for a legalization process that we've been fighting for for so long. We can, y'kno, be reunited with our partners and make sure that our partners are able to stay here," explained members of Out4Immigration while they marched at the 2013 San Francisco Gay Pride Parade. Even though it was a celebration, Matt was more somber: in the place of his spouse, he had a sign that read "Separated by 5,000 miles and 2 years, he's finally coming home."

Matt married his lover in the United States, however, the Defense of Marriage Act blocked him from applying for a green card. There are at least 267,000 undocumented immigrants in the LGBT community, and they did not all want to wait indefinitely until the government would finally get around to fixing our broken immigration system to start their family: Matt's story of lovers separated by an immigration policy which nobody thinks works anymore is not as uncommon as one would think.

This was one of the reasons why the DOMA decision was so well accepted that the Castro lit up for an impromptu celebration that rivaled Pride. The DOMA decision had fundamentally changed the legal relationship between LGBT couples and their government: at the end of the day, despite initial framing of the issue, the gays aren't going to hold a gun to Father Bob's head and force Jesus to marry LGBT couples at the Vatican. Rather, it is a civil right for people to contract between each other and their government to create mutual rights and responsibilities between the two individuals which is recognized by the government.

Perhaps it was because of this simple civil rights fact, or because the Supreme Court has been thrust much more into the spotlight and influenced by popular opinion since the Bush v. Gore decision; whatever the reason, Kennedy's eloquently drawn opinion on the dignity of the LGBT community and the children who have been a part of what the Supreme Court has described as "skim milk marriage." This has granted a greater degree of dignity to the community, as well as the children whom they have raised pretty well (i.e. Zach Wahl).

Walking down Market St., it was hard not to notice a display of adorableness as Amos Lim, the head of Out4Immigration, and his partner, help symbolize the rights their community had just won: they passed out Out4Immigration stickers with their daughter, who was wearing a pair of rainbow wings and skipping along, smiling and waving at the crowd. The right to keep a family together is at the heart of the push for immigration reform and, with supportive, loving partners and children in the crowd, it's easy to see why. While Amos has his green card, he ran a very difficult legal gauntlet to do so, which many easily fail. A few weeks ago, another committed, same sex couple in a very similar yet less fortunate immigration situation could have easily been separated by deportation, their access to their children stripped away and their children themselves put into foster care at taxpayer expense depending on the home situation. Alongside Amos were other LGBT couples with children, additional proof of previous hard fought battles won.

Thanks to the DOMA decision, our hypothetical yet loving couple, and everyone in their situation, now have an opportunity to raise their children with a greater degree of certainty that they will be able to remain together as a family, as well as a greater opportunity to contribute to their community.