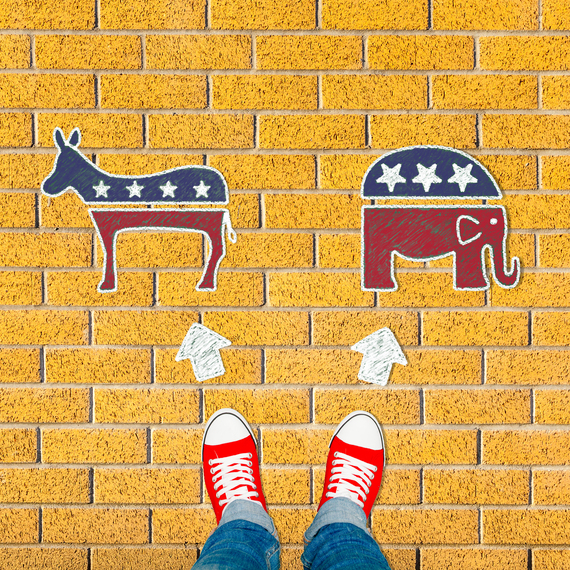 SOMEWHERE OVER THE RAINBOW, USA. (July 29, 2016) - Is this a presidential election or a bad version of The Wizard of Oz? The long and perilous journey along the yellow brick campaign trail to the November election is almost over. It's nomination time and both Republican and Democratic parties have held their conventions.

Both major party spectacles were two versions of the same story we have seen played out before. The Republican Convention was full of old-fashioned, small town values like the classic Judy Garland version of The Wizard of Oz. The Democratic Convention featured a much more diverse cast and urban flavor, like The Wiz version brought to us by Quincy Jones, Diana Ross and Michael Jackson.

Each major party convention was trying to bring us to a fanciful place of hope - their Emerald City - but most of us know there will be a big letdown when we get there. They promise exciting change, but deliver a depressing con job instead.

Both conventions had drama and some horror too. They spun negative messages so fast the opposition candidate became twisters that would destroy our way of life if elected.

Each brought out a full cast of characters to celebrate their political party and freshly anointed standard-bearer. Every one doing their part to convince themselves and the world that we aren't living in Kansas anymore, and could end up in hell if we make the wrong decision come Election Day.

The delegates, or Munchkins, were there to support the party if not the candidates. Candidate family members, party luminaries and some current serving mayors of Munchkin Land, gave speeches praising their party candidate for crash landing a house on their nemeses, and gave credit for accomplishments that no candidate could possibly claim as theirs alone.

The primary candidates they beat out - the fallen party hopefuls who are each party's Lollipop Guild - lost the primaries either because voters did not believe they were qualified to be president or were unimpressed with their campaign song and dance.

To me, the high-priced campaign consultants and party bosses orchestrating the campaign are the scary flying monkeys that gave me childhood nightmares. They chase after our votes and donations like the winged beasts that stalked Dorothy and her friends. They want to capture our hearts, minds, wallets and probably our little dogs too (if they could vote).

Broadcast to the world every speaker, every word, every song and every moment carefully scripted for the cameras, right down to the gestures each one makes. Point there, wave here, it all seems forced, like poodles in a bad animal act.

I am shocked at how unauthentic political campaigns are in an age when consumers crave authenticity. The flying monkeys/campaign consultants must think us voters are stupid. Maybe it's part of their evil plan - to dumb us down using negative campaigning, fear mongering and toxic rhetoric - that has left us few candidates to believe in anymore, if any at all.

I hope voters are not as unaware as the flying monkeys think we are, but rather information-overloaded and underwhelmed by our buying options. When you think about it, it is pretty alarming that most of us spend more time vetting the products and brands we buy than the candidates we vote for.

It's like we're shopping for our next president in a dollar store. People don't do homework before purchasing anything from a dollar store - we either buy what they are selling or not.

The flying monkeys count on our low expectations so we will vote based on how candidates make us feel, not on what they will do. It's becoming more of a high school popularity contest than a presidential election.

I suggest consuming good content from a range of credible sources, not just those who share your political leanings. Studying candidate plans and qualifications empowers us not to be scarecrows who vote based on brainless emotion instead of information.

We don't want to be cowardly lions, too scared to cross our party line to vote for an opposing plan best suited to lead for our nation, either. It's not productive. Just look at the crippling stalemates in Congress without true compromise.

Please don't be one of the tin folk who lack the heart to vote because if you truly love your country, you won't stand idle rusting away a freedom that so many before us fought and died for. It will be worth the time and effort to become an informed voter. Our country is worth it. After all, there is no place like home.