The first big primaries of the 2010 campaign season are in the books and if you're a fan of schadenfreude and watching well-heeled political titans hit the skids, it was a particularly sweet night. It was a pretty bad night for zombie narratives, too, like: "bummer night for Democrats," or "I believe in the power of the Pennsylvania political establishment." Of course, it should be said, if your zombie narrative was "zombie narratives will have a bad night," then you didn't come away clean, either. Basically, everyone took it on the chin last night at least a little bit, and it was really sort of glorious.

Of course, the least glorious loser of the night was the first body to drop: Kentucky Senate hopeful Trey Grayson, whose campaign strategy -- declare himself the frontrunner absent any evidence and then ride a sea of blathering support from every smug prick in the GOP establishment to victory -- finally got mugged by the reality that every shrewd observer knew was laying in wait.

As Dave Weigel captures in his close-out exegesis on the Kentucky GOP primary, Rand Paul won because he straight up stomped the state: "Paul got in early, and organized early." By the time Grayson touched down from 30,000 feet in the air, the streets were clogged with Paul supporters who bore their sweat equity and intensity like a point of personal pride. The Paulites had come a long way since 2008. Then, Ron Paul's fanbase came off like a gaggle of second-lifers who dreamed of buying a blimp. But in Kentucky circa 2010, they were masters of ground-game fundamentals. Rand Paul is definitely not Rand Paul's father's Paul.

Now, we get to watch as everyone rides in to try to assign credit for Paul's success to some other political entity. Rand's no dummy, of course. He'll maintain his campaign's common cause with the Tea Party movement for as long as it benefits him. But if you want to speak in shibboleths with Paul's true believers, don't get it twisted: the Paulites invented the insurgent political game that the affluent Republicans calling themselves the "Tea Party" have rented. Perfected it, really. The last great Tea Party hope was the New York 23rd's Doug Hoffman, and in that race, the Tea Partiers spent the last week of the campaign participating in an orgy of self-congratulation, while Democrat Bill Owens played the ground game and won. Paul's diehards didn't make that mistake.

Bad night for Grayson backer Mitch McConnell, I guess? I'm not sure how last night was different from any other night in McConnell's life, but that's what the media will say happened. They surely will forget, as quickly as possible, that their darling dear Dick Cheney backed the wrong horse -- and very specifically cast Grayson as the choice for Cheneyism.

At the same time, I had to laugh last night when someone told me that Chuck Todd said that Kentucky made Jim DeMint "very much a kingmaker." I feel bad for Todd, but that's just dumb. DeMint finally endorsed Rand Paul on May 5th, and while his vague smile shone on Paul's enterprise for some time prior to making a commitment, DeMint was still very much a joiner. Calling him a "kingmaker" is like calling a guy who boards the northbound Amtrak NE Regional at Metropark a "hobo."

Speaking of the sad tramps of Acelastan, can we talk about Arlen Specter, whose election night failure will do wonders for Dutch Cleanser futures? Specter had the support of just about every light in the Pennsylvania political firmament. Their bland support for Senator Weathervane was fittingly captured by MSNBC's Chris Matthews who -- when he's not lodging patrician complaints about the quality of DC civil servants and their snowplow efforts -- likes to pretend that he's the avatar of middle-class Pennsylvania, forged in the Centralia coal fire. Yesterday afternoon, Matthews gushed to Specter, "You're the first person I ever voted for!"

Ultimately, Matthews' youthful electoral excursions didn't matter. Nor did any of the naked insistence from the Ed Rendells of the world that Specter was Kid Inevitable. As soon as Pennsylvania Democrats caught a sniff of the possibility that an actual Pennsylvania Democrat might win, they predictably stopped supporting a Pennsylvania Republican and threw their support to Joe Sestak. Sestak closed like a champ, finishing Specter off with a devastating ad that ably demonstrated just how fluid Specter's loyalties were.

Specter spent the last days of the campaign desperately trying to cast himself as a one-person Committee To Save The World, insisting that his latest party-switch was evidence that he actually wanted a harder path to re-election. It was an argument that no one who'd achieved the cognitive milestone of object permanence could possibly buy.

Of course, Specter has to play out the rest of his term, and will play a part in several important Senate votes along the way. That means that for the first time in a long while, we're going to get to see what Arlen Specter authentically believes. Chances are, you should be terrified.

The Specter loss, of course, was also a loss for the Obama political "machine," which, having gotten in bed with Specter early, had to back away in the late weeks of the campaign for the fear of getting Specter's loser-stink all over the White House. A similar blow was landed in the Democratic Senate primary in Arkansas, where Bill Halter pushed the incumbent Blanche Lincoln into the runoff she wanted to avoid so badly she nearly voted twice. Senate Democrats now have a tough decision to make: do they sell out to Wall Street and water down Wall Street reform now, or do they hold out for as long as Lincoln needs to pretend that she gives a shit about policing the market for synthetic derivatives? And, during that time, how many more ads does Barack Obama cut for her?

Of course, if it was a bad night for the White House political operation, the end result wasn't bad for the rattling ghost of 2008 Presidential candidate Obama. Lincoln was nothing but a perpetual drag on the agenda that Obama promised from the hustings of the 2008 campaign. And Specter? Well, I think this picture speaks a thousand words. 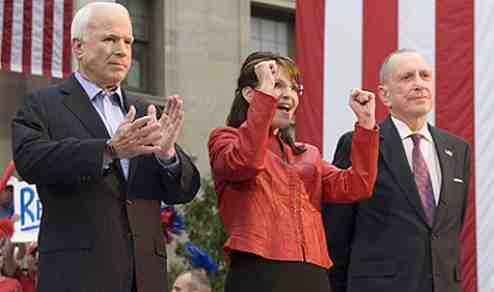 So, if you are a fan of policies that resemble something authentically Democratic, last night was yours to enjoy. Of course, the Democratic party will tell you the same thing about Mark Critz, winner of the special election in Pennsylvania's 12th District. As that race came to a close, Democrats got increasingly bullish on the race, frantically pushing it as a bellwether competition that was supposed to finally exorcise the Scott Brown demons from January. The problem with that story is that -- unlike the blows landed on Specter and Lincoln, which affirm the relevance of a liberal policy agenda -- Critz doesn't exactly do that agenda any good. Lest we forget, Critz actually cut this ad: