A few hundred Chicagoans who didn't make the A-list of invitees to director George Lucas' Saturday wedding reception at Promontory Point scored a slice of the evening's entertainment when Prince showed up at City Winery for a last-minute concert following the reception.

Just before 5 p.m. Saturday, the West Loop venue dropped the surprise via Twitter:

Tickets, which started at $75 and went as high as $250 for special VIP seating, sold out in a flash.

The legendary performer, who played his three-night "Welcome 2 Chicago" residency in September, was spotted rocking an afro and shades during his 100-minute long performance, all backed by a 20-piece band that include an 11-member brass section.

Prince reportedly played two encores — including a cover of Janet Jackson's "What Have You Done For Me Lately?" — and took a turn behind the drums.

True to form, however, the Purple One kept his Chicago fans waiting yet again, this time, before the show even started.

Doors were advertised as opening at 11:30 p.m. for the midnight show, though Brooklyn Vegan Chicago reports "nobody really got into the venue until around 2 a.m."

While there was a strict no-photo policy, a few members of the audience were able to grab some surreptitious video footage and blurry Instagram shots.

An employee for City Winery did get one (presumably kosher) pre-concert photo of the star's gear that is, of course, purple: 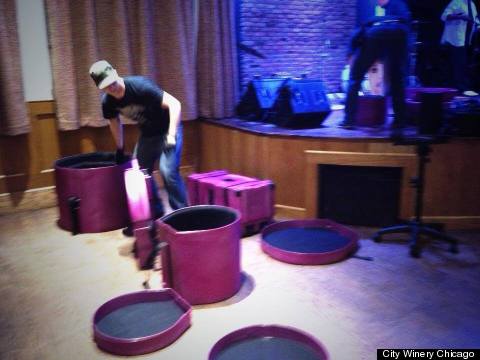