My, what a big baby boy Prince George has grown to be!

In a newly released photo, the eight-month-old British royal strikes a pose with his parents, Prince William and Kate Middleton, and the family dog, Lupo, at their home in Kensington Palace. We can barely contain our excitement, as we've been waiting to catch a glimpse of Prince George since his christening last October. (That tabloid cover from his first holiday was such a tease.) But it was all worth the wait!

While William, Kate and Prince George are all stylishly coordinating, the little one steals the spotlight in a powder blue sweater (that appears to have his first name printed on it) and white collared shirt. Sporting much-longer hair in this third official portrait, his comb over gives way to those cute and chubby cheeks.

We can't wait to see what Prince George will be wearing when he travels with his parents to New Zealand and Australia in April. But if this photograph is any indication, we'd expect him to be dressed just as dapper as his dad. 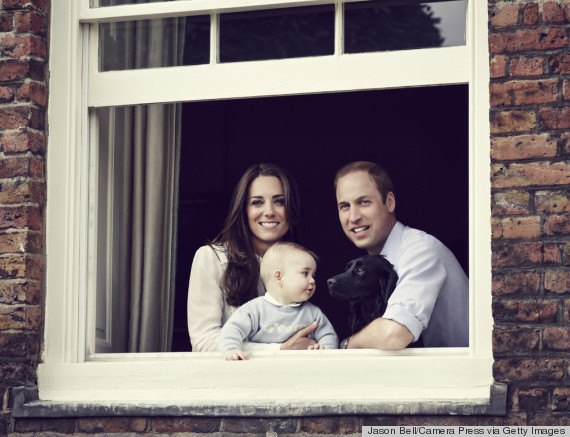