We all know Prince Harry likes to have fun. There was that time he danced to Bob Marley and when he swilled rum in Belize. The rest of the time, he's busy cycling through a seemingly endless parade of hot blondes.

But we're thrilled to see that the latest Harry antics include some hilarious sartorial flair. Harry took a break from Olympics fanboying to check out the Womad music festival in Wilshire last week, with rumored new squeeze Cressida Bonas in tow.

His concert outfit of choice? A plush Angry Birds hat, shaped like the yellow bird character from the already-classic smartphone game. The 27-year-old prince, hat in tow, grabbed the paddles for a game of table-tennis, which he managed to play despite the distraction sitting above his temples.

Super cute, we're squeeing, etc. Although if we were Harry, we would have requested a hat version of the BEST Angry Bird: the black one that turns into a bomb. Right? Right. 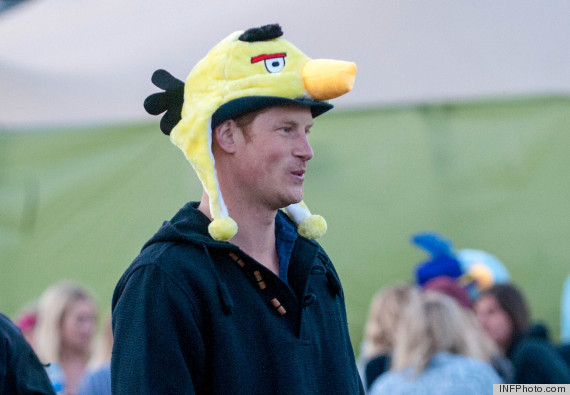 See even more Harry below!

US Presidential Election 2020
Breaking news, analysis and the latest polls on the presidential race from HuffPost’s politics team
See More
Voting Made Easy
Register to vote and apply for an absentee ballot today
Register now
More:
Prince HarryVideoStyleAngry Birdsslideexpand
Newsletter Sign Up
An essential daily guide to achieving the good life
Subscribe to our lifestyle email.
Successfully Subscribed!
Realness delivered to your inbox