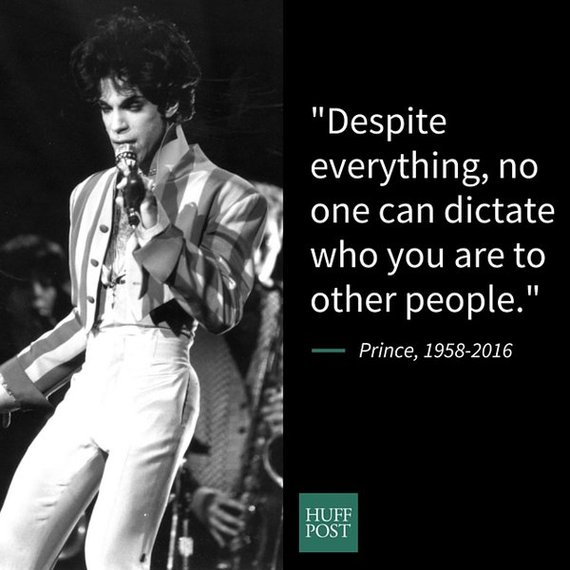 Music is my drug. It's how I cope with many things. If I'm driving, there's music on. If I'm writing, there's music on. When I feel big things, I turn on the songs that express those feelings. If I think back on nearly any phase in my life, or the big events, there is a song that goes with it. So the musicians that make that music mean something to me. Their creativity and expression impacts me, daily.

Thursday, when a friend messaged me a picture of Prince, I was totally confused. "I've got mad love for Prince, but what's up?" I messaged back. It seemed like the strangest text, from this particular friend: a photo of Prince, with no words. When he texted back that Prince was dead at 57, my brain froze. What? How could that be possible? Prince-- he's so... so alive. So iconic... so amazing. Shocked is not an understatement for how I felt, sitting there reading those words.

His music will always transport me to a very different time in my life. In 1984 I was living in Boston, a junior in college. In many respects, my life was a mess, but I was also having the time of my life. As the first in my family to go to college, I was working three jobs and going to school full time. I felt a lot of pressure to succeed, while I struggled to pay bills, have a social life, and stay afloat. Like so many people my age at the time, I was figuring a lot of things out. My friend D was the first openly gay person I had ever known. He was funny, brilliant, and a gentle soul. When he came out to his fraternity brothers, people he trusted with his truth, they threw his things out the fraternity window, and tossed him out. It rocked my innocent world, as I still believed that we all had each other's backs. I hadn't really experiences that kind of prejudice yet. I loved D for who he was, and the friend he was to me. He was there for me, at a time when I often felt alone and unsure of myself. Prince was our sound track.

When the movie Purple Rain came out, Prince was already huge. We were all listening to him. D and I went to see it because we both had a Prince crush, and we knew it was safe to go together and gush. Gush we did. When I watch that movie now, it's hard not to laugh at the corniness, and the over the top drama. Then, we were young and we over-looked any of that, because we loved Prince, and in Purple Rain he delivered what then seemed like a new level of super Prince sexy: all the smoldering looks; the shy, coy, sexual smile; the incredible music-- All of it, had us huddled in that dark theater, in Harvard Square, swooning. Prince had us in the palm of his charismatic hands. To this day, when I hear a Prince song, I think of D, and when I hear the song When Doves Cry, I'm transported to that night with my friend, when we were both seduced by the electricity that Prince brought to every thing he did. 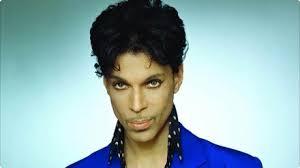 I read a great quote: with Prince "every song was a prayer or foreplay." It's a dead on description of what Prince's music means to me. He could be a bad boy, in the sexiest way. His smile: that was coy, sexual, childlike, depending on the moment. The way he shifted his eyes, taking you in, including you in his world, but leaving you unsure, or feeling naked and seduced. The songs that weren't sexy (were there any?) were in fact prayerful in their depth. He sang of pain, loss, love, and life in honest layers of genius.Those are the songs that hit deep. There were so many that were simply playful and memorable as Funk (always Funk), Pop, Rock, diamonds. It was nearly impossible to sit still, or not sing along, when a Prince song came on the radio.

I'm not a music critic; I'm a music lover. I can't explain in technical terms, all the reasons that Prince was an icon, a musical genius, an enigma. He wasn't famous for drug fueled, groupie scenes; he rarely granted interviews, which kept his life private. His music was epic, and his life didn't get in the way of the music. When his name was in the news, it was about generally about great new grooves, a spontaneous concert, or some humanitarian effort. He wasn't a superstar who didn't behave badly to stay in the news, though he was brutally honest and at times arrogant. His "shade" is infamous, and he didn't mince his words.

Much like Bowie, who rocked my world in similar ways, Prince changed the way I looked at the world. At a time when I was coming out of my protected, preppy shell, he and icons like him showed me-- through their music and their personal styles, that the world could be vibrantly purple, and not just navy blue. His overt sexuality challenged me on so many levels. When he gets out of that bath tub, in the original video for When Doves Cry, I didn't know whether to watch or cover my eyes. He was different from anyone I knew, and I loved it. But even more, I was drawn to a quiet vulnerability that showed through his raw sexuality and brilliance as a musician. These elements in Prince made it hard to take your eyes off of him. He owned any stage he was on, any movie scene he was in (regardless of how good or bad the movie was) and any interview he gave. As much as he scared me (having come from a much more sedate background), he also challenged me to accept others who were different, and to explore other sides of myself.

The world lost another musical genius this week. For all the ways Prince changed what we listened to, how we moved to music, and how we saw it, he will be remembered forever through that music and the legacy he has left. When I hear a Prince song, I will always be transported to a dark theater and to Cambridge, MA, where my world expanded and I grew up. 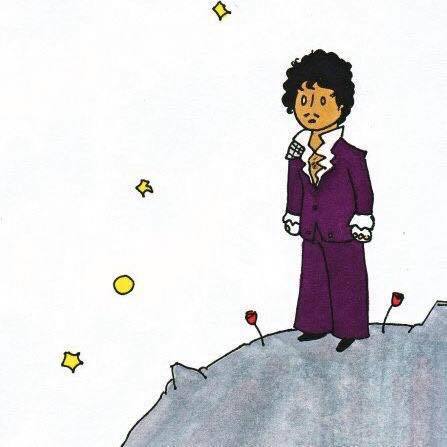 Rest in peace dear Prince. "Every song was a prayer, or foreplay," and your artistry will be truly missed.

Are you a Prince fan? What is your favorite song or memory? Share your thoughts in the comment section. Tell me what you think; I'm listening. Share/Like on FB; simple things make me happy! Become a "fan," with the icon next to my name, at the top. And follow me on Twitter! If you'd like to read more of my writing, check out my blog Tales From the Motherland.