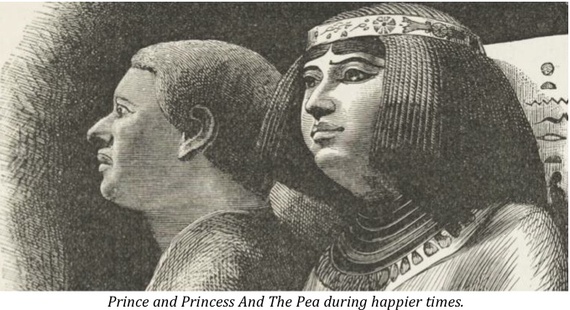 Though their publicist released a statement stating the break up was "mutual and respectful," the Prince was spotted stumbling out of an upper east side bar slurring the declaration, "bitch be high-maintenance, yo," to anyone who would listen.

In fact, sources close to the Prince admit the relationship was "a nightmare" despite public proclamations of an amicable split.

"He should have seen the writing on the wall," one source said. "Anyone that freaks over a pea under twenty mattresses and twenty featherbeds is going to be a miserable impossible-to-please pee-hole...pun intended. And she was impossible to please in every way, if you know what I mean. I thought the Prince was going to wind up with that Michael Douglas cancer."

"It's true," another source confirmed. "Yes the pea-under-twenty-mattresses-and twenty-featherbeds thing determined she was a 'real princess,' but who cares? Know what it's like having sex on top of twenty mattresses and twenty featherbeds? Dangerous. That's what it's like -- and the poor guy's afraid of heights."

Neither the Prince nor Princess And The Pea could be reached for comment, but their publicist requested that "the couple be granted their privacy during this difficult time -- made especially difficult due to paparazzi, press, and lack of pre-nup."