So a big round of applause for Arklu, a British toy company that has produced the creepiest looking Kate and William dolls we've ever seen.

The Guardian posted pics of the plastic figurines, which show the Duke and Duchess of Cambridge on their April 29 wedding day. Prince William wears his memorable bright red jacket and blue sash, the giant collar of the coat practically choking his tiny plastic head.

Kate's head, on the other hand, looks like it was flattened out with a rolling pin. Her face is about three times the width of her teeny neck but the exact same size of her waist, making her the first doll in history whose waistline was not tiny enough.

At least she looks utterly ecstatic to be marrying a royal, whereas Prince William's plastic face is molded into a weird half smile-half grimace.

Maybe it's because he knows that from here on out, he will always play second fiddle to his popular wife. Case in point: you can buy the dolls as a pair or just the Kate Middleton doll alone... but those who just want their own Prince William doll are out of luck, writes the Guardian.

Fine by us -- we're all about the Kate Middleton replicas. But our vote goes not to the creepy Arklu versons but rather to the engagement Kate Middleton doll, which comes in a teeny version of the famous navy Issa dress.

It's the only way we're ever going to own the dress anyway, given it's sold out from now until forever.

See more pics at Guardian.co.uk or bravely head to Arklu.com to make a purchase. 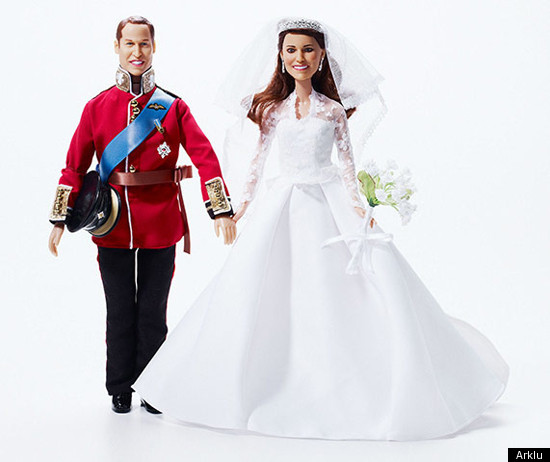