Remember when Prince William was an awesome dancer?

Uh, neither do we. But the British royal does, on occasion, find excuses to bust out some moves, creating some amazing photo opportunities in the process.

Yesterday was one of those moments, as the royal couple visited a center for homeless youth called Centrepoint to bake cookies and hang out with the kids. While we were distracted by Kate Middleton's chic Ralph Lauren dress, sheer black tights and very flat (read: not pregnant) stomach, Prince William was getting his swag on with the "swag dance."

When the Duke asked whether his suit had been "dapper", she replied: "No -- your swag was on point" meaning she approved. Appearing somewhat confused, the Duke responded: "Swag?" before brushing his lapel.

Check out William brush the dirt off his shoulder at 0:36 -- and in the photo, look at how adorable Kate finds the whole thing. She must've prepared herself for moments like this, given William's long history of awkward dancing.

In July 2007, Prince William and Prince Harry hosted a massive concert in Wembley Stadium in memory of Princess Diana. As Nelly Furtado performed to a crowd of 63,000, Will stood in the royal box, dancing awkwardly with what can only be described as a total "dad move" (see video below).

Even Prince Harry seemed a little embarrassed to be standing next to him.

Luckily by 2008, he seemed to have picked up some new moves. The Daily Mail printed pictures of William dancing with an unidentified blonde at a friends' wedding, spinning her around the dance floor and even singing along to the music.

It was all in preparation, of course, for the Swag Dance. Check out the videos. 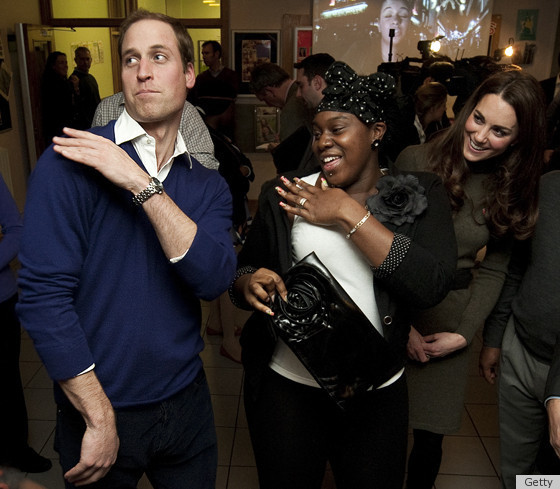