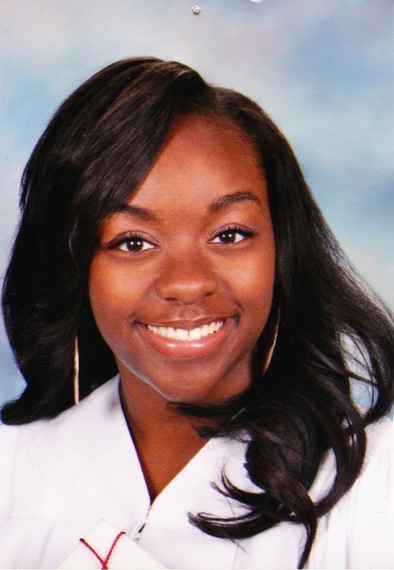 My first class was gym. I sat alone on day one of high school. I did not know anyone and felt relieved when two strangers, Alvin and Eric, sat beside me on the bleachers. Maybe a new friendship?

"Hey! What town are you from?" Alvin asked.

Eric chimed in, "What school did you go to?"

The conversation took a mysterious turn. Alvin and Eric changed the tones of their voices to their versions of how black people talk. It felt as foreign as this school.

"Do you like fried chicken and watermelon?" Eric said, with a weird grin.

I was speechless on my first day ever in a predominantly white school. Welcome to Long Island Lutheran High School.

Four years later, I am completely at home at the school that once felt foreign. A few weeks ago, Alvin and Eric sat across from me in fashion class. Eric asked, "Hey, Nyla, did you get a new weave?"

I laughed. I have grown comfortable around them. I grew to love LUHI after the first two weeks of total alienation. I have always refused to allow others to deter me from opportunity. Perhaps it all started with my name. For years, I was under the impression I was actually a natural born princess after I discovered that my mother gave me the name Nyla because it means "Ethiopian princess." I carried the confidence that came with the name to encounters similar to the watermelon moment. I was five years old when my eight-year-old cousin called me a dweeb. I instinctively responded, "No! I'm a princess, not a dweeb!"

More than just the name sustains my strength; so does dance. It has always been a pivotal and constant factor in my life--Ballet, modern, liturgical, and jazz. I have danced in my church's Allen Liturgical Dance Ministry since I was six and have been enrolled in dance schools since I was five. At sixteen, I met the hardest yet most meaningful dance ever. The name of the dance says it all: "Hurt." The demanding dance was upbeat and fast, which was very different from the church's slow and flowing ballet dances. It challenged my agility. When my dance teacher saw me struggling to finish the dance, she yelled: "Lose some weight, Nation! Maybe that'll help!"

Out of breath, I did not respond. I devoted every day after that to practicing. Her comment motivated me. I did not allow her perceptions of weight and dance to stop me from mastering "Hurt." In the show, I performed stronger and was a better dancer with tougher skin.

Yet even before that moment, I was a princess of tough skin to make it through so many transitions. My family moved from Queens to Westbury when I was ten years old. I left a small, multiracial private school in Queens where not one race was in the majority. In Westbury, I entered a larger public school with a black majority and without any friends. By the time that I was at home in Westbury's public schools, I moved again to LUHI. Two weeks after my horrible first day of school, still apprehensive, I stepped on the bus to go on the freshman retreat. I had just heard the news that I made the dance team, which made the school a little more tolerable. I finally felt that I had a niche in the school. I had yet another outlet for my anxiety, fear, and stress. Gradually, I revealed my bubbly, outgoing, extroverted personality. I introduced myself to peers and held conversations that were nothing like my interactions with Alvin and Eric. By the time that I danced in my first pep rally at homecoming, I was in love with LUHI.

Eventually, I got to know Alvin and Eric. I now understand that the boys were joking on that first day and really did not mean any harm. They were trying to make my first day of school more comfortable and enjoyable with jokes but were not aware that they were offensive.

In a way, I am thankful for the boys from gym class, my cousin who called me dweeb, and my harsh dance teacher. Through life-shaping transitions, my confidence has been tested many times. I am stronger with every encounter with adversity. I may not be a natural born princess, but I am still a princess. I am Nyla.

Nyla Nation, a graduate of Long Island Lutheran High School, is a freshman at Spelman College.