A Dayton, Ohio, mom was horrified when the toy she thought was a princess wand turned out to have an image of a demonic-looking girl slitting her wrists, WHIO reports. 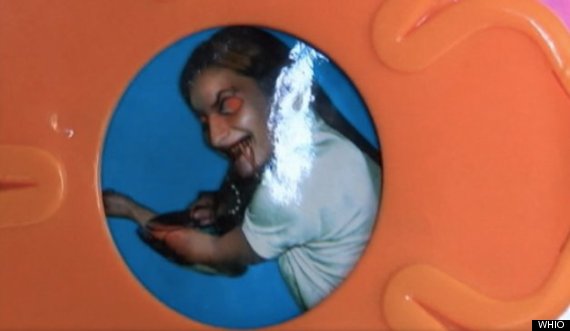 Nicole Allen told the station her two-year-old daughter peeled back a piece of foil on the toy to reveal the disturbing image.

"I’m outraged," Allen said. "I wanna know how they think that is suitable for a child."

Amar Moustafa, the owner of the Dollar Store where the item was purchased, said Allen should have known what the toy was all about because it's called an "evil stick."

Gawker's Kelly Conaboy offers a qualified defense of the toy.

"Though the toy is certainly not suitable for children, and while I disagree with the store owner that children see 'images like [a demon slitting her wrist] on TV every day,' I do think this spooky nightmare toy is suitable for a certain blogger who would love if her local dollar store began carrying it," Conaboy wrote.