We, the mayors of several of Europe's great cities, have a duty to protect the health of our citizens and to secure a healthy environment and decent quality of life for them.

Soon, 80 percent of Europe's population will live in urban areas. Our day-to-day lives are punctuated by peaks in pollution levels, largely caused by vehicle emissions, that result in serious health problems. We therefore assume with determination our mission to protect public health and the climate. This is why we made a firm commitment at COP21 in Paris to reduce the level of pollution in our towns and cities.

To uphold this major commitment made to the women and men who elected us, we need ambitious and bold European regulations.

We need fair rules that apply to all private companies across Europe, particularly those in the automotive industry. Let us not forget that the WHO has found that vehicle emissions are responsible for 75,000 premature deaths in Europe every year.

In October 2015, a technical committee made up of experts from Member States decided to permit vehicle manufacturers to exceed the emissions limits set by EU legislation. If implemented, this decision would allow new diesel cars to exceed the emissions thresholds for nitrogen oxides (NOx) by 110 percent. In February 2016, the European Parliament regrettably chose to support this policy, which poses such a threat to the inhabitants of our cities.

If this decision is implemented, then the air quality in our towns and cities will not meet EU standards.

How can we protect the health of our fellow citizens when the European Union has rubber-stamped a permit to pollute, at the expense of public health? What can we say to parents whose children are suffering from acute respiratory disorders, or to elderly people and to the most vulnerable? Should we tell them that their government has prioritised the health of the automotive industry over their own?

We believe that this decision is unfair and wrong. It is unacceptable to introduce emissions thresholds, only to allow them to be violated. It cannot be right to impose a duty upon public authorities to comply with air pollution standards, while at the same time giving the automotive industry the green light to infringe them.

Seventy percent of global greenhouse-gas emissions originate in cities. The successful implementation of the Paris Agreement, negotiated with such skill in December, now depends upon action by cities. As mayors, we are ready for that responsibility. Cities in the C40 network have already taken more than 10,000 climate actions since 2009. Now we need the support of political leaders at every level. We appeal to governments from across Europe to use all the legal and political means in their power to ensure Europe's air pollution standards are applied consistently across every industry. The health of our citizens depends upon it. 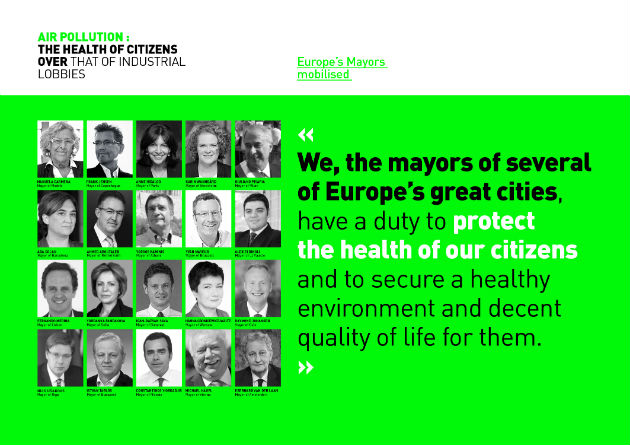 Read this piece on Change.org in French, Spanish, or English, where you can also sign the petition to show your support.