In no other place and at no other time in human history have people been incarcerated at such high numbers and for such prolonged periods than in America, since it began to prosecute its so-called 'war on drugs' in 1971. More than 2.2 million people are languishing away today in our nation's prisons. Seven million are under carceral supervision. What's more, this seemingly compulsive desire to confine, which was once exclusively associated with America, is now becoming a global phenomenon. Architect Glen Santayana, however, has designed "PriSchool", a prison-school hybrid that could transform incarceration, as we have come to know it, for the better. 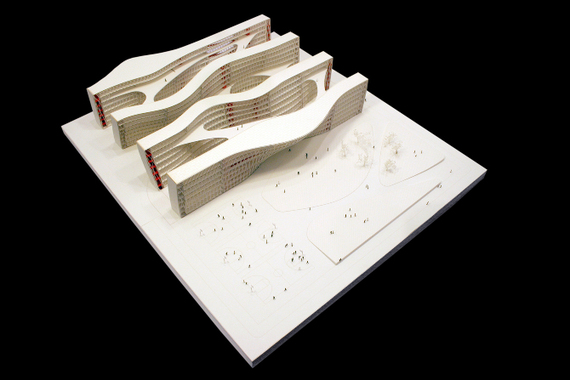 For most people, prison is largely a peripheral or irrelevant matter; it is the unattached barn on the outer edge of the societal compound we rarely visit, seldom think of or assess, but assure ourselves operates as it should; the final stop for a fair justice system. Yet, as studies and first-hand accounts have shown, prison is neither oriented toward rehabilitation, nor does it reflect true justice.

Starting in the 1970s, the rate of incarceration exploded. Since 1980 onward the number of people in our prisons has almost quintupled, and most of them are poor people of color. The 'war on drugs', which is largely responsible for the prison mass-incarceration, has been waged primarily on poor minority communities. Poverty rates among minorities far exceed the national average; the figures can be seen here. As a result, the color and class breakdown of our prisons reflects a disturbing disproportionality -- people of color make up 60 percent of the total number of those imprisoned. Famed sociologist Loïc Wacquant in Punishing the Poor puts it bluntly:

"At the lowest rung of the social ladder, incarceration serves to physically neutralize and warehouse the supernumerary fractions of the working class and in particular the disposed members of stigmatized groups..."

The current rise of evidence-based sentencing adds another complex wrinkle to incarceration and further heightens its demographic asymmetry. Many states have incorporated this new practice, which uses data predictions of a person's future propensity to commit crime to pass out sentences. The criteria for which includes: education, finances, unemployment, neighborhood and family background. Such policies further disadvantages people from poor and disadvantaged communities, burdening them with longer prison time because of circumstances which are fundamentally not in their control.

Incarceration in itself is only one aspect of the larger problem, for there are many devastating effects that follow. In communities where a large number of people have been or are currently incarcerated, even those who haven't ever been incarcerated suffer. Upon returning from prison, ex-convicts have fewer job opportunities; and while some do eventually find employment, their annual income is substantially less than the national average. Children raised in a family with at least one parent who is incarcerated are more prone to delinquency, thus continuing the vicious cycle (Cambridge Study in Delinquent Development 2005). Incarceration erodes familial and communal stability; families that are already financially insecure spend a considerable sum paying for exorbitant prison phone call fees and the attendant expenses of visiting their imprisoned loved ones. Young men and women who should be the future leaders and pillars of their communities are snatched away, leaving already exhausted communities to deal with the impoverishing consequences.

Upon release former inmates return to broken neighborhoods, shattered families, grim futures and no prospects. They are disenfranchised, passed over by prospective employers, disqualified from receiving social welfare benefits and practically disowned by society itself. As a result, many return to a life of crime, which leads to re-incarceration and the continued spiraling of the pernicious penal wheel.

It is clear that our current strategy of mass-incarceration is not working; we spend tens of billions of dollars annually and are left with nothing in return but swelling prisons, damaged lives, ever-increasing rates of recidivism and a dark stain on our collective national conscience. America has prided itself on being the world's symbol of justice and liberty, yet we unjustly incarcerate our own citizens, thus depriving them of their liberty, more than any other nation on earth. It is impossible to reconcile such a paradox; we must simply work to undo it.

Santayana has provided us with one innovative idea that can help transform our penal system. While attending the Harvard Graduate School of Design, he designed a prison-school hybrid called PriSchool, which aims to tackle mass-incarceration by merging education and incarceration for non-violent criminals. According to Santayana:

"The inmates will gain new practical skills and intellectual capacities that will facilitate their transition back into society. In addition, the mental and cognitive stimulation will allow former prisoners to gain a sense of confidence and dignity that may have been suppressed during incarceration...this new system of higher education incarceration will promote rehabilitation and the creation of new productive members of society." 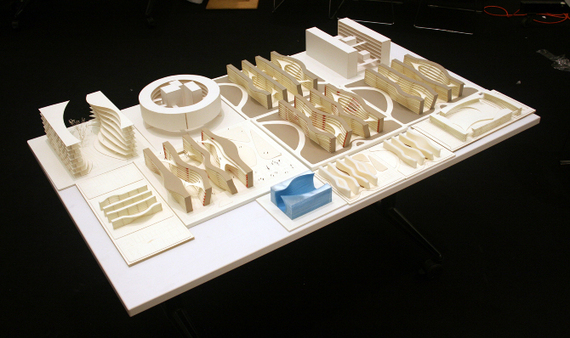 Mass-incarceration is a strategy of old, one whose consequences our entire society is now reeling from. No group, race or community is predisposed to criminal behavior; socially manufactured ills like poverty, unemployment, along with a targeted and partial penal strategy are to blame for our prison problem and its demographic character. Santayana's PriSchool is an example of the kind of innovative thinking that we desperately need. Policy makers should take heed of his model. His idea should be tested and, if proven sound, PriSchool should be the design of the future. Moreover, average Americans should lend their voices to the cause of prison reform. If greater support is given to reform movements and sufficient pressure is brought to bear on politicians for them to act, the more likely it will be that ideas like Santayana's will be implemented in the future.

Across countless states today new prisons are being built and policy makers and politicians remain ever more intransigently committed to an anachronistic "tough on crime" philosophy. PriSchool presents us with an opportunity to not only begin to shrink the glutted behemoth that is our prison system, but also at the same time return to the very purpose of incarceration, which our system has since neglected -- rehabilitation.

By infusing an educational component to incarceration, and substantially transforming the dehumanizing and mentally debilitating setting of our current prisons, we will allow for inmates to return to society as productive citizens. PriSchool is an idea we ought to truly consider.