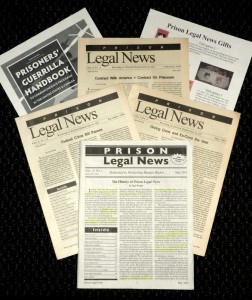 Last month, a small, black-and-white newsprint magazine quietly made a case in a Florida courtroom to protect the fundamental rights that nearly every citizen in the industrialized world holds dear. Yet the odds are, you didn't hear a word about it.

Prison Legal News has reported on the legal landscape of prisoners' rights in America's prisons for 25 years. It was founded by Paul Wright from his prison cell in Washington State, where he was serving a 25-year sentence for shooting a drug dealer (he was released in 2003). From the beginning, its goal has to been to inform both the incarcerated and their families regarding issues of prison conditions, resources, and reform. It has grown from a cheaply-produced newsletter slapped together by a few prisoners, to a well-respected, 64-page monthly publication backed by the non-profit foundation, the Human Rights Defense Center.

Together, PLN and the HRDC print and distribute books, litigate free speech issues across the nation, and generally serve as the most respected voice for the 2.3 million men, women, and children presently confined in our country's prisons and jails.

PLN itself has more than 9,000 subscribers across all 50 states. An estimated 70 percent of all the subscribers are incarcerated, the remaining balance being attorneys, prisoners' rights advocates and loved ones of prisoners. The managing editor, Alex Friedmann, is a former prisoner himself, and most of the columnists and contributing writers are incarcerated themselves. And in the interest of full disclosure, I am also a contributor.

PLN has become a key player in the battle against censorship and has also had success in forcing correctional agencies to disclose records of their operations, information that many agencies guard most jealously. Their work has brought to light corruption and breaches in ethics and has earned HDRC the Society of Professional Journalists' annual First Amendment Award. More recently PLN and HDRC led a successful push for tough new FCC regulations designed to reign in the exorbitant telephone rates charged by prison phone vendors (imagine paying $28 for a 15-minute call to your family 30 miles down the road).

But when operating a non-profit, funding is a constant battle; prisoners and their families generally don't have a lot of extra money. As such, PLN funds its operation with fundraising campaigns and also by selling ad space to a carefully monitored hodgepodge of lawyers, specialized publishers of prisoner-centric books, magazine subscription providers, pen pal services, and other purveyors of goods and services aimed at the prisoner market. And that's what's set Florida Department of Correction officials' sights on the publication.

It's no secret that prison officials tend to be less than supportive of efforts to educate prisoners on their rights or to disseminate information regarding prison conditions; this is not the first time the FDOC has attempted to silence PLN. In 2003 prison officials began impounding issues when inmates ordered the magazine, justifying their actions with the thinly veiled assertion that advertisements contained therein presented a "security threat." PLN sued the agency on the grounds that it violated the first amendment, and in 2005, the FDOC "assured the court they would no longer censor the magazine." T​he case went to trial and the district court held that claim was moot based on the FDOC's statement; ​they then appealed to the 11th Circuit, which upheld the lower court's order.

Starting again in 2009, FDOC began to again block PLN, via the application of a Department of Correction rule on "Admissible Reading Material," which prohibits publications that include advertisements for three-way calling services, pen pal services, the purchase of products or services with postage stamps, or promotes inmates conducting a business.

And so this past January, PLN headed back to court.

Whether advertisements for pen pal services truly represent a security problem for the Department of Corrections is a matter that a jury will decide at trial. The view on such matters is skewed sharply in favor of prison officials, who enjoy great deference from the courts when their security policies are reviewed for constitutionality. PLN probably faces an uphill fight; as long as prison officials can maintain a poker face while citing the dangers associated with postage stamp purchases, they'll probably win.

But why should anyone outside the prison system care about this? Because all pretextual laws and regulations on free speech are a danger to our freedom as a nation. As Justice Brennan noted in a 1963 civil rights case involving the NAACP, "broad prophylactic rules in the area of free expression are suspect."

Here, a powerful government entity, the State of Florida, wishes to suppress a long-respected voice of dissent and social justice by targeting arguably "dangerous" content in the advertisements. We must remember how bitterly the Framers of our constitution battled over the contours of the First Amendment. Allowing the State to crush legitimate dissenters who are attempting to ensure transparency and accountability, by prohibiting the advertisement of lawful endeavors should make everyone take pause and ask: what are they afraid of?

A bench trial took place in January, and we're now waiting to hear the court's judgment. Let us hope that the Justice remembers Meriweather Smith's words to the Continental Congress, "When the liberty of the Press shall be restrained, the liberties of the People will be at an end."

CORRECTION: A previous version of this post stated that Prison Legal News dropped their action against the FDOC in 2005. ​Instead, t​he case went to trial and the district court held that claim was moot based on the FDOC's statement.