When San Francisco-based venture capitalists Chris Redlitz and Beverly Parenti walked into San Quentin State Prison in 2010 to speak with a group of inmates that a friend was mentoring, they didn’t know what exactly to expect.

But the men behind bars, whom Redlitz described as “the most engaged audience I’ve ever spoken to,” blew him away with their enthusiasm -- and business plans. That means a lot given Redlitz's extensive background advising and investing in digital media and tech startups such as LevelUp, Wish and Bottlenose through his work with Transmedia Capital.

The experience at San Quentin, Redlitz said, started him thinking: What if they created something to engage those men, sitting idle for years upon years in California’s oldest prison, and help them turn their ideas into reality? Parenti was “not enamored” with the idea, he recalled.

Putting skepticism aside, they began to research prison programs in the United States, and that same year their passion project was born: The Last Mile. TLM is an intensive tech entrepreneurship program for San Quentin inmates that Redlitz and Parenti hope can be a model for prison education.

“[The inmates] have no sort of attachment or information or exposure to the people from the outside. They don’t have a conduit to it,” Redlitz said. “I figured we could leverage the relationships we have in Silicon Valley and be that conduit to others, for them to be educated and get involved.” 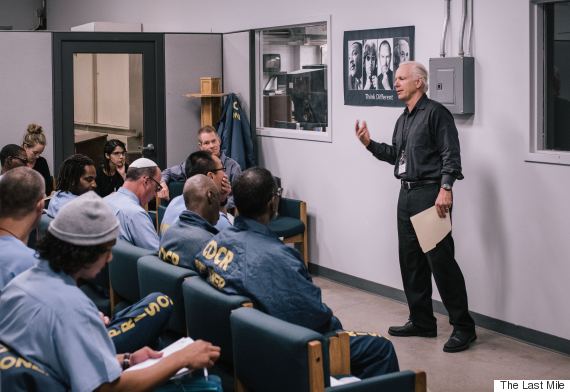 Chris Redlitz speaks during a meeting of The Last Mile's tech entrepreneurship program.

In the United States, according to the most recent data from the federal Bureau of Justice Statistics, about 68 percent of state prisoners released in 2005 were re-arrested within three years. Given that 2.3 million people are currently incarcerated nationwide -- and that it costs taxpayers an average of $31,286 a year to incarcerate just one inmate -- the price of recidivism is huge for cash-strapped states and devastating for those who end up, again, behind bars.

Research has shown that in-prison education programs can go a long way toward reducing the recidivism rate. According to a 2013 Rand Corporation report, which was supported by the U.S. Departments of Justice and Education, each $1 invested in prison education reduces incarceration costs by $4 to $5 over the first three years after an inmate’s release. Further, inmates who participate in education programs behind bars are an estimated 43 percent less likely to re-offend.

"Our findings suggest that we no longer need to debate whether correctional education works," Rand senior policy researcher Lois Davis wrote in the report. "But we do need more research to tease out which parts of these programs work best.”

Meanwhile, government funding for prison education programs has been on the decline, which leaves many former inmates with few employment skills upon their release, driving them right back where they came from. 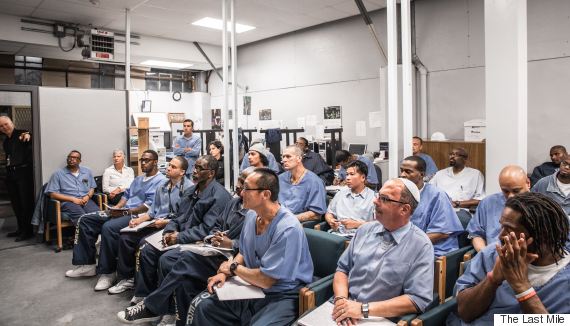 Participants in The Last Mile's tech entrepreneurship program, the first of its kind in the United States.

TLM is attempting to fill that void. Its entrepreneurship program meets two times a week for six months and relies on instruction from volunteer mentors, guest speakers and even alumni of the program, themselves former inmates.

Participants, some of whom are on the tail end of long sentences and have never even used the Internet, learn how to use computers, how to connect on social media -- tweeting and blogging through handwritten messages transcribed by volunteers -- and how to form a business. The program has the support of the California Department of Corrections and Prison Rehabilitation.

Each run of TLM is capped off by Demo Day, during which participants present their ideas for startups to an audience that’s a mix of fellow inmates and some of Silicon Valley’s best and brightest. The event was featured in a mini-documentary from filmmaker Ondi Timoner, released last month by Wired magazine.

One graduate of the program is Chrisfino Kenyatta Leal, who was released from prison in July 2013 and began an internship at the San Francisco tech campus RocketSpace the same month. He now works there as campus services manager and has helped bring two other TLM graduates on board, Leal said in a HuffPost blog article published March 30.

It is a win-win scenario for both the inmates, who find stable, well-paid employment, and the employers, who find motivated, dedicated workers. And Leal’s example is not unusual, Redlitz said, which is why he is confident that what they're doing in San Quentin is scalable. The program has been so successful that they’ve expanded their offerings, adding a coding class last fall.

“When you’re giving someone a second chance and you see the desire and dedication they put in that surpasses many of the entrepreneurs we invest in, many of the companies we invest in, I think that’s part of why the economics are there,” Redlitz said. “Once these guys see someone cares and they realize there is actual, real hope here, there is no stopping them.”

Brian Hill, a J.D.-MBA student at Northwestern University, was similarly impressed by the determination of inmates that he observed as a child when his father taught classes at California's Folsom State Prison. Today, he too is working to further the education of the incarcerated, although his effort has taken a very different form.

“They are hungry to learn and hungry to be employed when they get out,” Hill said. “They want anything that can help them achieve that.”

His company, Jail Education Solutions, has created a platform called Edovo for specially designed tablet computers that can be used inside correctional facilities. 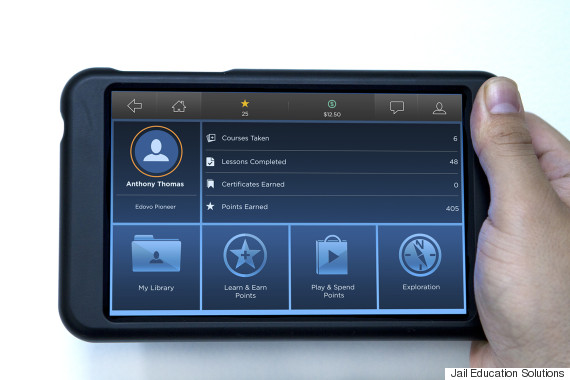 The computers, operating on a closed network, can be rented at low cost by inmates, who choose educational content that best suits their interests and needs -- including literacy training, GED studies, college coursework, vocational programs, financial instruction and substance abuse therapy. Thus far, the company has been financed through grants and other support from such groups as the incubator Impact Engine and the MacArthur Foundation. Those two groups are based in Chicago, as is Jail Education Solutions.

“In one day, we get more educational and vocational treatment programming available into the hands of one inmate than any inmate in the history of the world,” Hill said. As the prisoners successfully complete coursework, they earn credits that can be used toward “purchasing” music, movies and games, so there is an incentive to learn.

Hill suggested that the use of tablets can make a big impact on prison education efforts because traditional programs often have too few slots and long waiting lists.

“A small minority of the [prison] population gets any sort of programming while they’re in corrections, and that’s a lot of wasted idle time that makes facilities less safe and leaves individuals unprepared,” Hill said. “It’s arrested development and it’s doing a lot of damage in the long term."

Advertisement
To take action on pressing education issues, check out the Global Citizen's widget below.