My home is in Florida and I am proud to say that just a few weeks ago, equality came to Florida in the form of legal marriages for same sex couples. But just when I thought it was safe to celebrate, I started reading about the prisons in Florida.

I am a minister of the Gospel of Jesus and not too long before he was brought up on trumped up charges, he made a powerful speech to a group of people who wanted to know how to get to heaven.

He told them that if they had shown him kindness when he was hungry, naked, or imprisoned, they would be received by God. The people around him were aghast! They had never seen him in prison, hungry, or naked. How can this be? He turned and said, "Whenever you have done it to the least of these (those who are most vulnerable) you have done it to me."

Today, prisoners are everywhere, but you don't see the followers of Jesus flooding the prisons to bring hope to the hopeless, friendship, or spiritual guidance. There are exceptions, but generally, we are afraid -- we don't have time -- we don't have experience -- we might get killed!

Many years ago, I visited prisoners when I was a local pastor in Los Angeles. I was particularly moved by the women who were lesbian and could barely believe that a minister would not condemn them. I was leading an MCC congregation that was founded on welcome to lesbian, gay, bisexual, and transgender people. That was even harder for them to believe. But soon they received my ministry and began to minister to me as well. I am always humbled by the humanity and generosity of those who are living in inhumane circumstances.

I learned many lessons and had to overcome my own prejudices about people in prison. Good fortune and privilege of all kinds -- not my virtue -- were the reasons they were in and I was out. That was a conversion experience for me. As they began to trust me, I met more women prisoners who happened to be lesbian. They wanted spiritual guidance like anyone else in a seemingly hopeless situation.

Today, I need a little ministry of hope.

I was so thrilled when my marriage to my wife of 38 years was finally legally recognized in Florida. Then the stories began to surface about conditions in Florida Prisons. With over 300 deaths in 2014 -- many of them suspicious -- official investigations are beginning in an effort to correct the institution that is supposed to correct its residents.

Despite falling crime rates, prison rates continue to climb, even though state and federal budgets have suffered during the great recession. Today, the U.S. comprises 5% of the world's population and has 25% of the world's prisoners. We incarcerate people at a higher rate than any other country in the world. One in every 100 adults is in the prison system. Close to 60% of these people are Black and Hispanic, about twice the percentage of the general population of Black and Hispanic people.

The cruelty doesn't stop with the vast weight of massive incarceration on the shoulders of people of color -- that is only the beginning. From the Florida ACLU:

Florida sends more young people under age 18 to adult state prisons than any other state in the nation. Prisoners held in solitary confinement in Florida state prisons can be there for months on end. They are detained in nearly complete isolation, entitled to leave their cell three times per week to take a shower, and, only after thirty days, an additional three hours per week to exercise. Children in state prison may be subjected to solitary confinement and endure long periods without exercise, educational instruction, contact with their families or any rehabilitative programs and services.

Although children and mentally ill prisoners are particularly susceptible to the devastating physical and psychological effects of total isolation, they are dramatically overrepresented in solitary confinement. Neither Florida law nor its correctional regulations applies solitary confinement any differently to children or those who are seriously mentally ill, as compared to other prisoners, demonstrating a willful blindness to the particular vulnerability of these populations. In recognition of these practices, international bodies are increasingly investigating the treatment of incarcerated juveniles in the U.S.

Besides repeated accounts of solitary confinement for vulnerable populations, one prisoner was chained under a hot water spigot until he died and his flesh began to fall off. Such cruel and unusual punishment sounds more like Abu Gharaib than a U.S. prison where you are supposed to serve your time and come out alive. This is all the more shocking in the 21st century in a country that is the wealthiest and most secure in history.

Inhumane punishment combined with structural poverty on the "outside" is a sure formula for violent crime and escalating costs. Years of "getting tough on crime," "three strikes you're out," and mandatory sentencing meant exponential increases in prison rates and an avalanche of unintended consequences for families and communities.

Why do we have so little empathy for people who end up in jail and prison?

Through accident of birth, many grew up in crime invested communities or were abused as children. Schools expelled them, gangs recruited them, and now all of us pay the price as we lose part of our own humanity.

The prison system in Florida that my taxes pay for is not worthy of the 19th century, much less the 21st. Neglect, poor nutrition, shameful lack of medical care, isolation, and torture by guards and other inmates creates a living hell for many.

The context of our racialized society cannot be lost in this conversation. South Florida prisons are connected to the homicides of Travon Martin, Michael Brown, Eric Garner, and too many others.

Not long after the investigation of torture and murder in Florida's prisons began, it was revealed that South Florida police were using mug shots of Black men for target practice.

Rev. Lura Groen started a campaign called #UseMeInstead. Clergy and other people from around the country sent their own photos to South Florida police to get them to use their photos instead of Black men's photos that train police to think "shoot" when they see the face of a Black male. 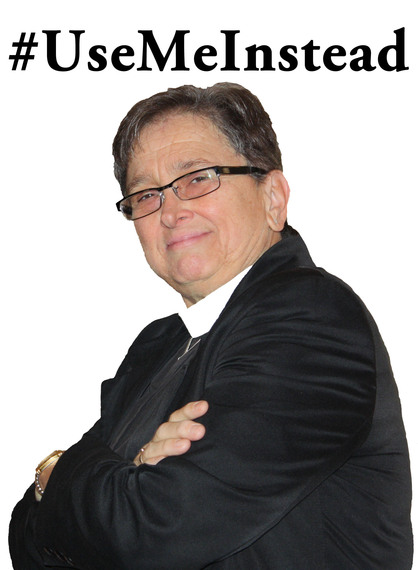 What else can we do? Maybe clergy should offer to serve part of the sentences of people who are victims of our criminal justice system. Be an advocate. Prisoners need people on the "outside" to advocate for humane treatment. Even families and friends who care often feel powerless to help. They need support.

Prisoners and their families are "the least of these" in our culture. They are off the grid of our consciousness, and whatever treatment they receive we figure, somehow, they either deserve it, or it will "cure" them somehow. Both assumptions are horribly, terribly wrong.

Think about the times you did not get caught or were not punished for an illegal action. What were the privileges that kept you out of prison? Class? Race? Money for Lawyers? What are the privileges that prevent you from committing crimes? Education? A steady job? Supportive family? These are not guaranteed in life.

When we sow the wind of abuse, we reap the whirlwind. Someday, someone may ask us, "where were you when I was in prison in Florida?"