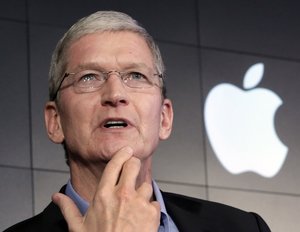 A federal judge in Brooklyn rules that the FBI cannot force Apple to unlock an iPhone used by a suspected drug dealer. This is a win for the tech giant, which has been caught up in a public opinion war over who should have access to encrypted smartphones. Monday's ruling is separate from the California case currently making so much noise after the FBI ordered Apple to unlock the phone of one of the San Bernardino shooters. But the ruling gives Apple more legal ammo in fighting the Feds who want Apple to rewrite software to create a "back door" for this specific phone to allow entry. Apple maintains creating a back door for one iPhone creates a hack for all iPhones.

Interestingly, the judge put the onus on the government itself, saying Congress considered a bill that would require companies to make data on phones available to law enforcement, but rejected that bill. U.S Magistrate Judge James Orenstein said what the government couldn't achieve in Congress it's not going to get from the courts. Orenstein said in this case, "the government went to court "rather than take the chance that open legislative debate might produce a result less to its liking."

Today, Apple and the FBI will appear before a congressional hearing to debate the issue of security versus privacy that was sparked when the FBI asked Apple to unlock the iPhone of terrorist Syed Farook who, along with his wife, shot 14 people to death in San Bernardino, California in December.

The issue of privacy can mean big business in the private sector. Companies like Privoro are creating a higher standard for privacy with a smartphone case that makes your device undetectable by network towers, Wi-Fi networks and other RF technologies. It makes eavesdropping nearly impossible by blocking your phones' cameras and microphones. CEO Mike Fong says the outcome of Apple's fight could very well determine if privacy will exist in the digital age.

The implications are staggering. On the one hand, bad apples may become harder to detect, but on the other, people and businesses will no longer trust their electronic devices. The technology industry, which has enabled such profound productivity, economic and societal gains over the past several decades would become suspect, chilling adoption and driving a fundamental re-evaluation of its use.

That higher level of privacy comes with a price. The Privoro Privacy Guard case sells for $1000 and is currently available for the iPhone 6/6s. It's a smart investment in an age when the government can track your every move. Even with court rulings like the one yesterday, there's no guarantee the Feds will play by the rules. One day our right to privacy may be nothing more than a privilege we'll have to pay for to protect.