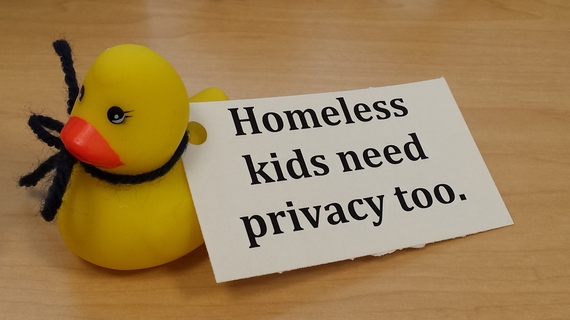 Mayor Bowser has made it a top priority of her Administration to "close DC General [family shelter] and replace it with smaller, more dignified community-based emergency housing located across DC." We fully support this goal, but unfortunately, we think she is making a critical error in determining what those new shelters should look like, an error that threatens to recreate much of the trauma, lack of safety, and poor public health conditions that currently exist at DC General.

The Mayor, via her proposed "Advancing Year Round Access to Shelter Policy and Prevention of Homelessness Amendment Act of 2015," is asking the DC Council to lower the standard for DC General replacement units from "apartment-style" to private rooms. (The law defines private rooms as just that, with no requirements around how families will bathe, eat, or take care of other basic necessities.) We believe that this standard will fail to protect the basic health and safety needs of homeless children and their parents, as well as make their daily lives much more difficult than they need to be.

For decades, we have worked for homeless families who have been forced to live in communal-style environments, from DC Village (which closed in 2008) to DC General. The buildings were old and too big, but those were not the most serious design flaws. Shared bathrooms, no ability to cook or store food, no ability to retreat from conflict and trauma--these are the design elements that have caused the greatest negative impact on the safety and physical and mental health of families, and these are the design elements that Mayor Bowser is proposing to continue in the replacement units. We believe that the law must ensure a minimum floor for families that guarantees private bathrooms, food storage, and access to cooking equipment. Even the Interagency Council on Homelessness (ICH), at the behest of the Mayor, released a report concluding that the Mayor should "maximize private bathroom space however possible without delaying closing of DC General" and also provide food storage and some ability to cook.

We recently interviewed 53 homeless families on what, based on their lived experiences, is critical for parents and children living in shelter--the majority of these families said private bathrooms (77-85%, depending on how long they're in shelter) and the ability to store (90%) and cook (89%) food were necessary. The following quotes and stories are what some of these families shared with us:

"I get anxious just thinking about my kids needing to use the bathroom in the middle of the night. It needs to be in our room."

"At DC General, it was a big problem to have everyone use the same bathroom. Having a 12 year old boy, I didn't want him going to the men's bathroom alone but I also didn't think he should go into the women's bathroom with me."

"Shared bathrooms pose a safety issue. You have to go with your child into the bathroom each time and they are not cleaned often enough."

"Children have to go to the bathroom in the middle of the night. They shouldn't have to wake up their parents to take them. Fathers have to take their daughters to the bathroom or to wash them and they can't do that in shared bathrooms."

"When I was at DC General, ... there were lots of unsanitary things in the bathrooms. There was no privacy. My son wouldn't even be potty trained when he was there because he was scared of the bathrooms."

"My daughter got ringworm our first night at DC General because of the shared bathrooms."

"Have you ever been to a public bathroom? Now picture doing that every time you or your kids have to go to the bathroom or take a shower."

One mother spoke of taking several medications that make her get up every two to three hours a night to use the bathroom and having to wake her young son and bring him with her each time, of making the long walk in pajamas down the hallway, and of trying not to let her pajamas touch the sometimes puddle-filled floor of the communal bathroom.

Another described the logistical challenges of showering a 4 year-old and a 6 year-old in a communal bathroom, having to sit them on the windowsill while she took her shower, and having to dress them in the air so their feet would never touch the filthy floor.

One mom with a disability lost her bowels in the walk from her room to the bathroom on a nearly daily basis and had to rely on her teenage daughter to help clean her up--even that humiliating task had to be done in shared spaces.

Another family had a little girl who couldn't bathe herself and had a compromised immune system. Her father began to sponge bathe her in their room after she contracted a urinary tract infection that resulted in hospitalization.

On Cooking:
"I want to be able to provide healthy meals for my family. I also have allergies and dietary requirements that can't be met by cafeteria food."

"With babies and kids who are on special diets, you have to cook to make sure they're healthy and are getting all the right nutrients. At DC General, the food made me very sick and I couldn't take care of my kids' needs because I was always getting sick from the food."

"It makes better sense for us to prepare our own meals than eating the junk food the shelter offers. Having control over our own food would help a lot with family dynamics and a feeling by our kids that we're together and ok. It gives back a sense of independence and unity between parents and children."

"No one likes the food being served in the cafeteria, but we're limited because we don't have a mini-fridge to store our own food. A fridge and a microwave would really come in handy, especially with small kids and infants."

"If anyone in the family has health problems or nutritional issues, parents need to be able to heat and store their own food. Kids deserve to have home cooked meals."

"Should be able to get quick meals in the middle of the day, like heating up a tv dinner. We should be able to do that because people get hungry at different times. People with certain dietary issues might need to cook."

Parents talked about getting sick from the food, about moldy bread and under-cooked chicken, and about food that they couldn't eat because of health problems and special diets.

Many spoke about spending their limited resources on food, only to have, as one mother put it, "the mice eat my food before we can" because there is no secure place to store it.

These are the voices that matter--the voices of the families who have had to raise children and get through their days in a dormitory-style environment with ever-changing strangers sharing intimate spaces. It's not speculative to say that families will suffer if we recreate this style of shelter. We know what will happen because families are living in that environment right now, and they are pinpointing the very problematic features--shared bathroom space, no ability to cook--that will be permissible under the Mayor's legislative proposal.