The American Association of Health Plans (AHIP) is the national trade group for some 1,300 private health insurers, which collectively provide some kind of coverage for more than 200 million Americans. As the voice of industry, AHIP's web site boldly describes its goals "to provide a unified voice for the health care financing industry, to expand access to high quality, cost effective health care to all Americans, and to ensure Americans' financial security through robust insurance markets, product flexibility and innovation, and an abundance of consumer choice." This post examines how successful the industry has been in one of these goals -- the cost and affordability of coverage.

The industry is failing miserably in keeping the costs of coverage affordable.
Consider:

• The average annual premium for a family of four is now more than $12,000;
• Premiums grew four times faster than inflation, outstripping wage growth, and increasing 87 percent between 2000 and 2006 (graphic);
• This explosive growth has been going on for most of the last 20 years.
• If this continues, as we saw in the first posting, premiums are projected to consume almost one-third of average family income by 2010 and ALL of it by 2025, clearly an impossibility well before that time.

Since almost one-half of Americans earn less than $30,000 a year, the cost of insurance premiums, much less health care itself, is unaffordable for a large part of the population. Health care expenses that are more than 10 percent of annual income are generally considered high; for lower-income adults below 200 percent of federal poverty level ($41,300 for a family of four in 2007), more than 5 percent is high. No wonder, then, that 47 million Americans are uninsured, and that tens of million more are underinsured with scanty 'coverage'. With near stagnant income and average household debt more than $100,000, health insurance for many is out of the question. For those workers who lose their employer-based coverage, only one in four can afford to regain their coverage under COBRA.

The gap between the rhetorical goal of low cost and price gouging is easy to understand: most insurers are investor owned and put their shareholders first. Insurers refer to the service they provide to their enrollees as a "medical loss ratio"(MLR), a term that shows how much they lose by financing care for patients against how much they make. Seeing care as a "loss" to investors, they try to drive MLR's down as far as possible, preferably spending no more than 80% of premium revenue on care. As a blatant example of unrestrained corporate greed, share values of United Health, the country's second largest health insurer, increased by more than 50-fold over the 17 year tenure of its CEO, William McGuire, until he was forced out in 2006 in a stock options backdating scandal after receiving more than $1.6 billion in compensation.

In sum, lack of affordability has become the Achilles heel of the health insurance industry. The theft of money in skyrocketing premiums, cloaked behind the guise of trying to provide "affordable" care, will lead us to look at the other "goals" on the AHIP website. In our next post, we will consider what kind of impact the industry has had on access to health care. 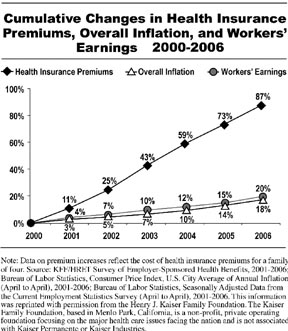 Adapted from Do Not Resuscitate: Why the Health Insurance Industry Is Dying, and How We Must Replace It, forthcoming, August 2008 by John Geyman. With permission of the Publisher, Common Courage Press.