NEW YORK -- Students took on more student-loan debt than they needed or could handle, during a borrowing boom from 2004 to 2008, largely due to relaxed borrowing standards set by private lenders, according to research from the Consumer Financial Protection Bureau and U.S. Department of Education released Friday.

The students who took out those private loans found that once they graduated, they had few options if they struggled to meet payments. Student-loan debt now outpaces all other forms of consumer debt, topping $1 trillion. Currently, there is more than $8.1 billion in defaulted private loans, representing more than 850,000 distinct loans.

Because of a change in the law in 2005, CFPB Director Richard Cordray noted, private student loans are "nearly impossible to be discharged" in bankruptcy. He stopped short of saying he would call on Congress to reverse the law, and allow graduates to discharge the loans more easily in bankruptcy.

However, he would suggest Congress reviews the law. "We try to be very careful about [what] we're saying about the bankruptcy issue," Cordray told The Huffington Post.

If Congress concludes the 2005 changes did not accomplish what they intended, "it would prudent to consider whether they wish to modify the code," he said.

Sen. Dick Durbin (D-Ill.) has been pushing for Congress to allow students to discharge private student loans in bankruptcy.

"There is no reason why private student loans should get treated differently from other private debt in bankruptcy," Durbin said in remarks at a Senate subcommittee hearing in March. "And it is especially egregious that these private loans are non-dischargeable in cases where a student was steered into the loan while the student was eligible for safer federal loans."

Both Cordray and Education Secretary Arne Duncan will prepare recommendations to Congress on how to address private student loans. The recommendations include requiring higher education institutions and lenders to work proactively to protect and inform borrowers, as well as greater flexibility and relief for borrowers in financial distress.

Part of the problem, the CFPB found, was that during the boom period, lenders began circumventing college financial aid offices and marketing loans directly to students. The private student loan market grew from less than $7 billion in 2001 to more than $20 billion in 2008, according to the CFPB.

"As the industry rapidly grew, the quality of the loans declined," said Richard P. Hackett, an assistant director at the CFPB. "[There are] big parallels to the housing market."

Colleges and universities typically release financial aid award letters to all students, stating the estimated cost of attendance and restricting the student from borrowing more than that amount. A student borrower would normally have loans distributed from the lender directly to their university -- any excess is refunded directly to the student.

But when lenders offer direct-to-borrower student loans, federal financial aid is not factored in and students are able to borrow without limits, opening the door for subprime lending.

Many of those companies involved in direct-to-consumer private student loans tanked following the 2008 global recession. My Rich Uncle, for example, became the fourth largest private student loan lender in 2007, but in 2009, the company filed for bankruptcy.

According to the report, students at for-profit colleges were four times more likely to take out private loans than students at traditional public and non-profit private colleges and universities. Students seeking loans for certificate and certification programs almost exclusively relied on private, "direct-to-consumer" student loans.

The report showed "people simply aren't clear on the different kinds of loans and grants they take out to pay for college," Duncan said, adding that universities need to do a better job explaining which low-cost financial aid options are available.

"Many of these financial-aid award letters don't do a good job showing how much aid they'll actually get," Duncan said.

But Richard Hunt, president and CEO of the Consumer Bankers Association, said the CFPB and education department did a "disservice" to consumers by not including federal loans in the study. "This is akin to ignoring the elephant in the room," Hunt said. "The report does not provide a complete, clear and objective analysis of the student-lending market.”

The report notes that about 40 percent of students do not use all of their Stafford federal loans before obtaining a private loan, and that students failed to use low-cost federal loans and Pell grants they may have been eligible for. Federal loans carried an interest rate between 3 and 7 percent in recent years, while private loan rates are typically between 9 and 15 percent.

Asked about whether he or Cordray would recommend that Congress increase the Pell grant awards more rapidly, Duncan pointed to the 2010 Affordable Care Act reform which expanded the number of grant recipients from 6 billion to more than 9 billion. The maximum Pell grant awardcurrently covers the smallest percentage of college costs in its history.

The CFPB said it is still exploring what options it can take unilaterally to address private student loan consumer risks. 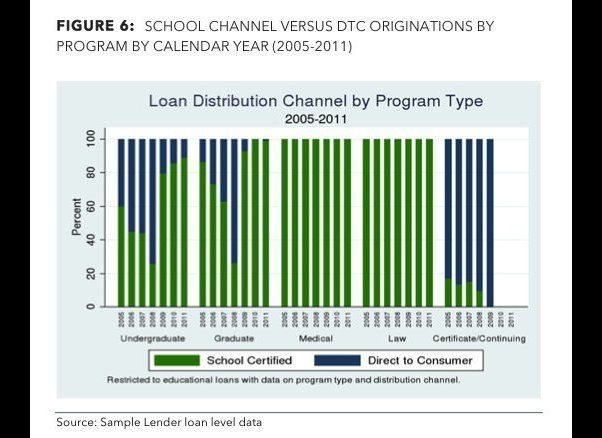