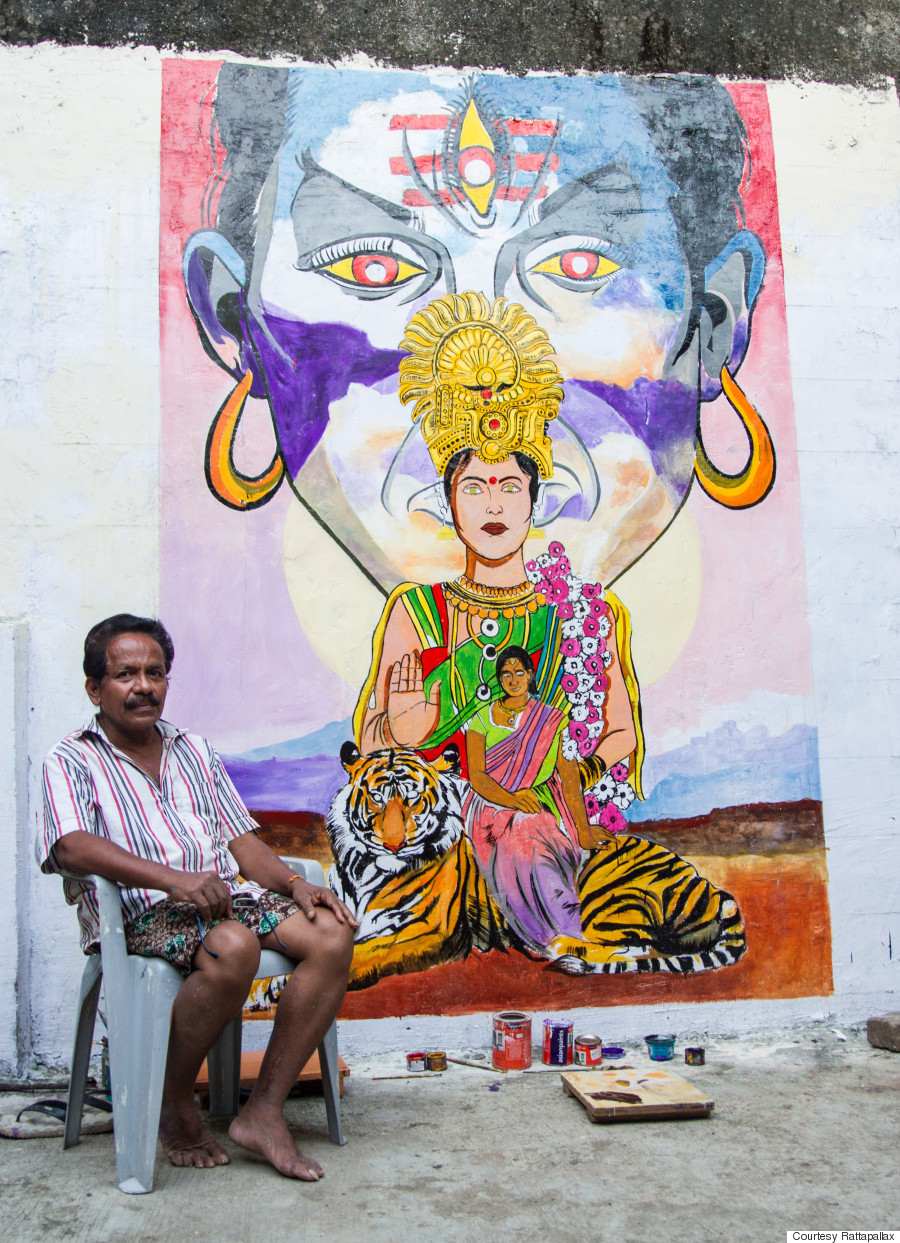 Ram Devineni has been thinking a lot lately about shakti -- a word that translates loosely from the Sanskrit to "female power." It's a transformative concept in a country like India, where the highest profile criminal cases tend to revolve around sexual abuse.

The brutal gang rape in 2012 of a student in Delhi led Devineni to create Priya's Shakti, a groundbreaking comic book that aims to inspire empathy for rape survivors in readers. His moment of inspiration came during a conversation with a Delhi police officer, who seemed to blame the victim for her fate. Disturbed by the cop's view -- essentially, that good girls don't walk alone at night -- Devineni set about trying to write a new cultural narrative.

His book tells the story of Priya, a girl who is sexually assaulted, shunned and eventually finds justice with the help of Hindu gods. Comic books have long been the primary medium by which Hindu kids learn religious stories. To reach the next generation, Devineni turned to technology. Using an augmented reality app called Blippar, he embedded the book's images with barcode-like tags that trigger animation, videos, real-life stories, and other interactive elements when read through an iPhone. The digital creation has become a global sensation since its debut at Mumbai's Comic Con last December, garnering worldwide press and even Instagram love from Mindy Kaling and Hannah Simone -- actresses from across the globe who both share Indian roots.

The visual that's spread on Instagram is similar to the ones Devineni is propagating on the streets of India. For Hindus, the imagery recalls the popular iconography of the goddess Durga -- or Shakti, as she is also known. As the story goes, Durga was created by the most powerful gods in the universe to defeat Mahishasura, a demon who managed to secure a boon that rendered him killable only by a woman. Mahishasura, a half-buffalo, half-human hybrid, assumed this made him as good as immortal. Durga, who rides a tiger and carries a colorful range of weapons, including a scimitar and a lasso, killed him anyway. 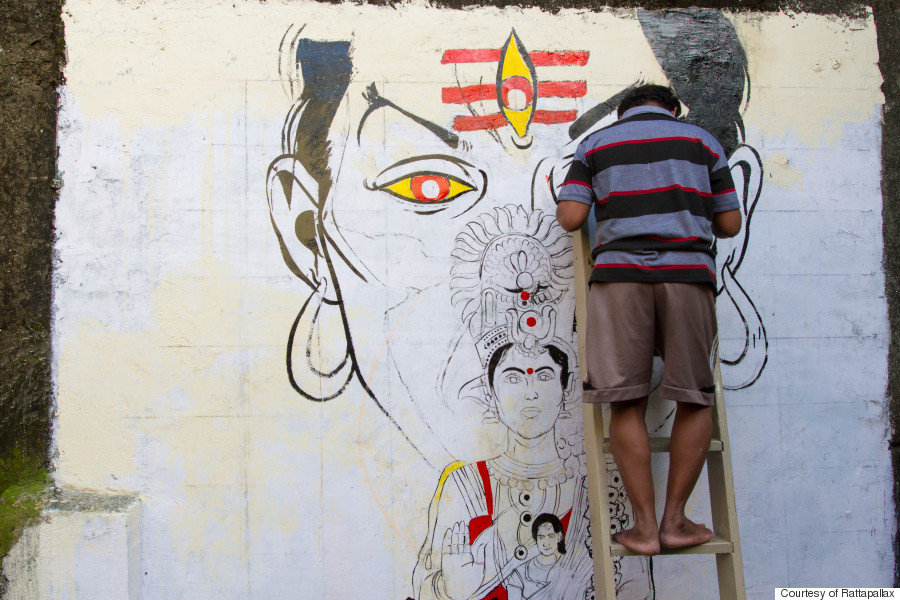 Devineni hopes to spread the parallel between Durga and Priya on the streets of India. Working with a non-profit community organization, he enlisted the skills of Bollywood sign painters who live and work in Dharavi, the sprawling, self-sufficient slum inside Mumbai. On walls inside the slum, they produced the comic's key image: Priya seated atop her own tiger, with a beatific smile not unlike Durga's. Because of their proximity to the works, the painters -- all of whom are men -- act as local "representatives" of the cause, Devineni says, fielding questions from local passersby and seeing that the paintings stay untouched.

The filmmaker recently chatted with The Huffington Post about the power of the artwork to change minds offline.

How did you find the muralists?

We worked with a local organization that has an arts center in Dharavi and a long tradition of doing cultural programs and art programs. [Some] local artists in Dharavi were former Bollywood movie poster painters. They also do political campaign art whenever somebody commissions them to paint on the walls. We gave them the image of the comic book and we allowed them to interpret it. I came in and added augmented reality on top of that [by taking] a photo of the wall and then used the Blippart app. 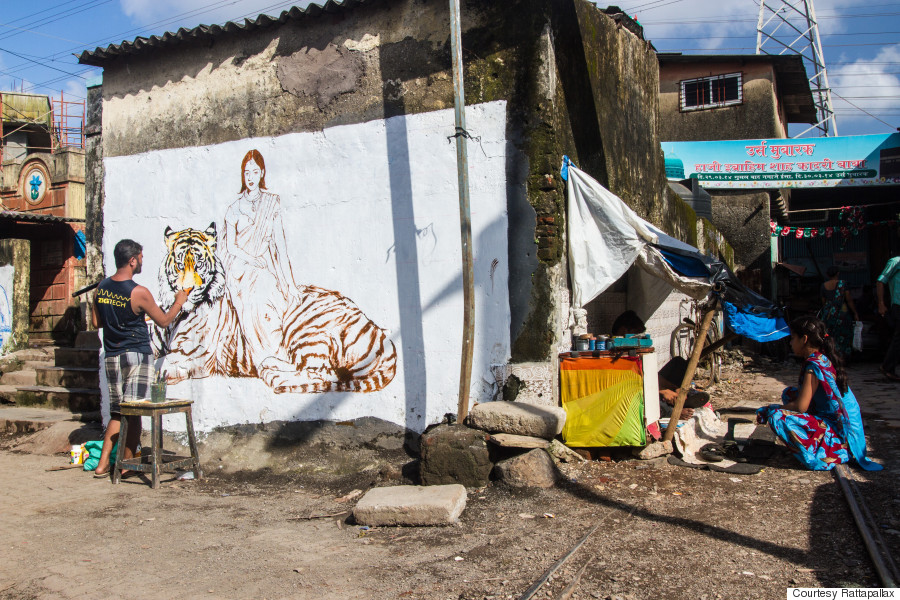 Where are the murals?

We painted four: three in Mumbai and one in Delhi.

As opposed to muralists in the West, Indian sign painters belong to what amounts to a guild. They're born into the work, and tend to be male.

Yes, it’s basically labor. It’s working class work. Our goal is to make more murals and eventually work with street artists, not just mural painters, who of course will be male and female. 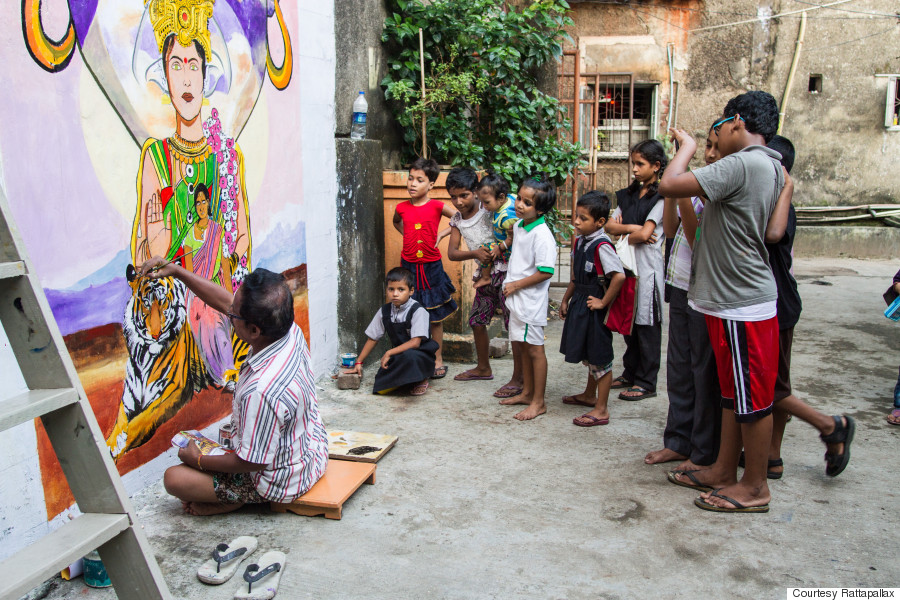 Are the men who paint Priya aware of her significance?

We tell them. They have to support [the idea]. Everyone in the community knows what they painted. They each have this distinct style. And people ask them about it. They become a representative for the mural, sharing what the meaning is.

How long will the murals stay up?

As long as possible. In India, local community boards decide how walls are used. They manage the villages, and we got permission from them to paint. The artist typically lives right next to his mural, so he makes sure it’s properly taken care of. 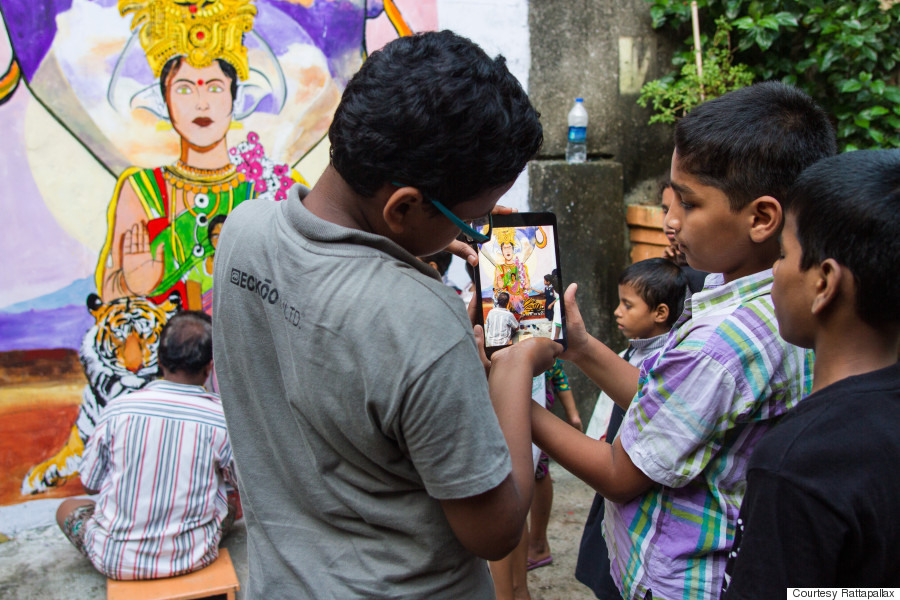 How will you know if the images succeed?

We want to make this an iconic image, a reinterpretation of Durga, the ultimate feminist goddess. There’s always a debate or discussion that happens around the murals. People know it's an image representing Durga but of course they know it’s not Durga. So they end up talking about issues of female power and strength. Already, that's some success.

Message In A Comic: Scenes From Priya's Shakti