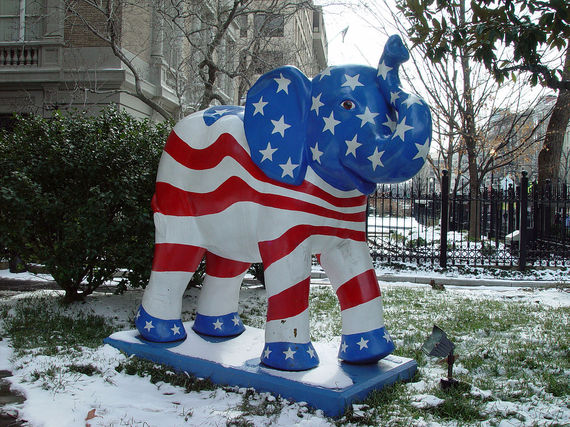 As President-Elect Donald Trump stacks his cabinet with climate deniers -- including Scott Pruitt, the Oklahoma attorney general suing the Environmental Protection Agency, to head the EPA -- it's helpful to keep reminding the country that not too long ago Republicans were acknowledging and acting on climate science.

It was a very different Washington just a few years ago. As much as it might feel intractable now, it's not irredeemable.

Take a look at the words bolded below from former House Science and Technology Committee member, U.S. Congressman Roscoe Bartlett, who coauthored this article with me. The article ran during the U.S. recession, proving that it's possible to talk climate even when the economy is in trouble.

Here's a Republican that was on record, unabashedly among Hill colleagues, referencing the UN Human Development Index, citing the irrefutable science and the key findings of the Intergovernmental Panel on Climate Change, and talking about the importance of international consensus and green collar jobs.

That's a big deal. The Congressman even promoted federal support for renewables.

That Republican also taught at Howard University, has a doctorate in physiology, holds 19 military patents, owns and drives a Prius, lives off the grid, is a vegetarian and has done more to move forward the "peak oil" conversation than any other Member of Congress, founding the Peak Oil Caucus.

In short, there's hope. If a Republican Congressman, who advocated limited government, was willing to put these words to paper just a few years ago, we can regain this kind of Republican rhetoric and realism now.

As we say below, "this Earth Day is different." How fitting now. Except this time it's back to rebuilding the basics of what we discuss below. Back to square one, perhaps, but I know there are a bunch of Republicans in America, and on the Hill, who have always been, and still are, pro-earth. Even if the new EPA head isn't.

Time to rally on behalf of the Roscoe Bartletts and all the other Republican congresspersons who have left a legacy of conserving and preserving the planet. Time to lead, GOP. You've done it before. Now do it again. We need you now more than ever before.

(In reading the text below, replace "Bali" with "Paris" for a more updated, and roughly similar, message.)

This Earth Day is Different

Earth Day, for some, is comparable to a sacred holiday, reminding us to tread carefully on nature's hallowed ground. For others, Earth Day serves as a starter on the basics of recycling and light-bulb changing. Regardless of the myriad ways in which Americans approach Earth Day '08, it remains substantially different from '07. What changed in one year? Washington joined the world in tackling climate change.

Beyond the irrefutable science, the benefits of pursuing a more sustainable energy footprint were too vast to be ignored. While much work awaits us, the change in attitudes is profound.

The shift resulted from a confluence of factors: the international consensus on climate change, coupled with an unprecedented price of petroleum, violent conflicts in some oil-exporting countries, alternative energy markets booming abroad, and economic fears at home. This proverbial perfect storm created support for measures to improve energy independence/security such as a unifying round of UN talks in Bali, legislation in Congress, and unparalleled private sector investment.

Bali's ability to bring to bear a consensus came on the heels of key findings by the Intergovernmental Panel on Climate Change (IPCC), one of which noted that preemptive action to avert climate change will cost significantly less than action postponed. Toyota was already reaping the rewards of this approach. The best-selling, low-emissions, hybrid Prius arrived -- fortuitously for Japan -- when the price of petrol was pummeling Americans' wallets. While the focus of the IPCC's warning concerned costs associated with catastrophic climate conditions, not market advice per se, the Toyota tale was telling.

Outperformed, and fearful of losing future fortunes to foreign entities, the U.S. agreed to a post-Kyoto framework for 2012. Better to be on board and barter standards, than watch, sidelined, as international industries innovate. This was noteworthy; America never ratified Kyoto. Bali changed that dynamic, setting in motion a new draft, new commitments, and new players -- including the U.S., China and India.

Concurrent with Bali deliberations, Congress hammered out amendments to the Energy Independence and Security Act, which for the first time in 32 years raised fuel efficiency standards. Not to be outpaced by Toyota's ingenuity, Congress thought it wise to ratchet up efficiency lest pricey petroleum scare buyers from American brands. Even Chairman John Dingell, representing auto worker voters, called for increasing Corporate Average Fuel Efficiency standards. He realized the costs of non-preemptive, postponed action.

This law to decrease reliance on foreign oil will pump new dollars into domestic alternative energy and provide a biofuels boon to America's farmers. While the latter is causing controversy -- given how energy intensive some biofuels are -- the directional shift is important. Our land offers much renewable energy. Harnessing it sustainably is the key. An energy portfolio comprised of America's vast untapped renewable energies -- solar, wind, cellulosic, biomass, other -- could provide needed employment, desired reprieve from volatility of foreign oil markets, and a shot in the economically recessing arm of the US.

The private sector understands the opportunity. Between 1980 and 2000, solar power grew worldwide by an annual average of 18 percent, accelerating dramatically since 2002 at nearly 50 percent. America's solar industry gained mightily too, growing 57 percent in 2007. Wind power has also been growing rapidly. U.S. capacity surged 45 percent in 2007.

What these statistics mean for Americans is explosive growth in businesses and jobs from energy efficiency and renewable energy. The American Solar Energy Society's Report Renewable Energy and Energy Efficiency: Economic Drivers for the 21st Century found these industries are already providing 8.5 million Americans "green collar" jobs, with potential for 40 million jobs by 2030.

While businesses recognize there's gold in "them thar hills," sporadic federal government incentives for renewables make long-term business planning difficult, if not impossible. That is why it is important for Congress to extend renewable-energy tax credits, expiring at year's end, for five years.

This Earth Day something is different. The international community has reached a new consensus, Congress is committing, albeit cautiously, to improved standards, and the private sector is storming the market and being rewarded handsomely. But more needs to be done. Although China is the number one carbon emitter among countries, America remains the world's leading emitter and energy consumer per capita.

Earth Day, then, remains an important reminder regarding recycling and light-bulb-changing. Moreover, a less energy intensive, carbon-light footprint can lead to happier and healthier living.

Japanese use less than half the energy Americans do. Yet they rank higher on the UN's Human Development Index, which combines higher life expectancy, relative income, educational level, and standard of living.

Americans love competition. We should embrace the challenge and achieve sustainability, environmentally and economically. This year, Washington gets that.

Bartlett [was] a member of the House Science and Technology Committee. Shank [was] the government relations adviser at George Mason University's Institute for Conflict Analysis and Resolution.