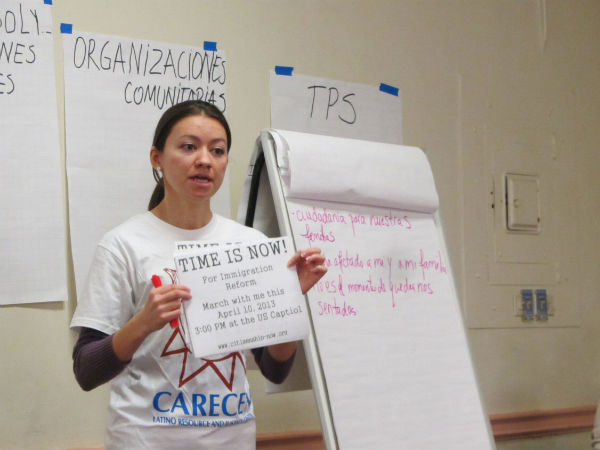 On April 10th, 2013 an immigration reform rally will take place on the West Lawn of the U.S. Capitol Building in Washington, D.C.. The rally/march organized by a number of local and national organizations, including CARECEN, Casa de Maryland and the SEIU, is another effort by pro-immigrant groups to call attention to the need to address the estimated 11 million undocumented immigrants in the U.S. Many of the organizers believe that now is the time to push for bipartisan legislation that addresses the outdated immigration laws in the U.S.

At an organizers meeting held on March 9 at a community church in Washington, D.C., over 30 volunteers, from different backgrounds, some native born, introduced themselves and stated why they were joining the rally for immigration reform. "We need to get people out that day and send a clear message to the president and the U.S. Congress that this time it will be different," said organizer Ana Negoescu, Director of Education and Advocacy at CARECEN, one of the key partners organizing the rally.

The last major immigration overhaul happened in 1986 under President Ronald Reagan. The 1986 immigration reform, known as Immigration Reform and Control Act (IRCA) of 1986, made significant changes to U.S. immigration laws. It (1) legalized aliens who had resided in the United States in an unlawful status since January 1, 1982, (2) established sanctions prohibiting employers from hiring or recruiting workers not unauthorized to work in the United States, (3) created a new classification of temporary agricultural worker and provided for the legalization of certain such workers, and (4) established a visa waiver pilot program allowing the admission of certain nonimmigrants without visas. An estimated 2.7 million undocumented immigrants benefited from the Reform and Control Act of 1986.

After 1986, the only half successful effort to address immigration reform happened in 2006, when the U.S. House of Representatives passed the Border Protection, Anti-terrorism, and Illegal Immigration Control Act of 2005, and the U.S. Senate passed the Comprehensive Immigration Reform Act of 2006. Due to partisan conflicts, neither bill became law.

On January 28, 2013, a bi-partisan group of eight Senators that include four Democrats: Chuck Schumer (NY), Dick Durbin (IL), Bob Menendez (NJ), Michael Bennet (CO), and four Republicans: John McCain (AZ), Lindsey Graham (SC), Marco Rubio (FL) and Jeff Flake (AZ), announced principles for Comprehensive Immigration Reform (CIR). This new proposal will include a path to citizenship for undocumented immigrants in the U.S., it will focus on reducing current visa backlogs, and it will address university immigrant graduates with advanced degrees in science, technology, engineering or math, also known as the STEM fields, amongst other benefits. These provisions, combined with tougher border security and improved employment verification programs, will lead the conversation on immigration reform this time.

But many are quick to criticize this new effort, and some members of Congress, like House Judiciary Chairman Bob Goodlatte, oppose a pathway to citizenship. Others opposing immigration reform use the argument that an amnesty program legalizing 11 million people will have the same consequences we saw in 1986 when 2.7 million benefited.