This is a question that I'm often asked: "Where is the fine line that separates normal drinking from problem drinking?"

People ask this question for a good reason: They want to know if their own drinking qualifies a "normal" or "abnormal." This thinking also reflects the way we've traditionally come to think about drinking, which has been in black-and-white terms. Ever since medical professionals came up with a set of symptoms that they labeled alcohol dependence, or, more simply, "alcoholism," it has been popular to see the "drinking world" in terms of two categories: Either you are an alcoholic, or you are not. The implication here is that if you do not qualify for a diagnosis of alcohol dependence, you are "okay."

The above thinking can be represented by the diagram below: 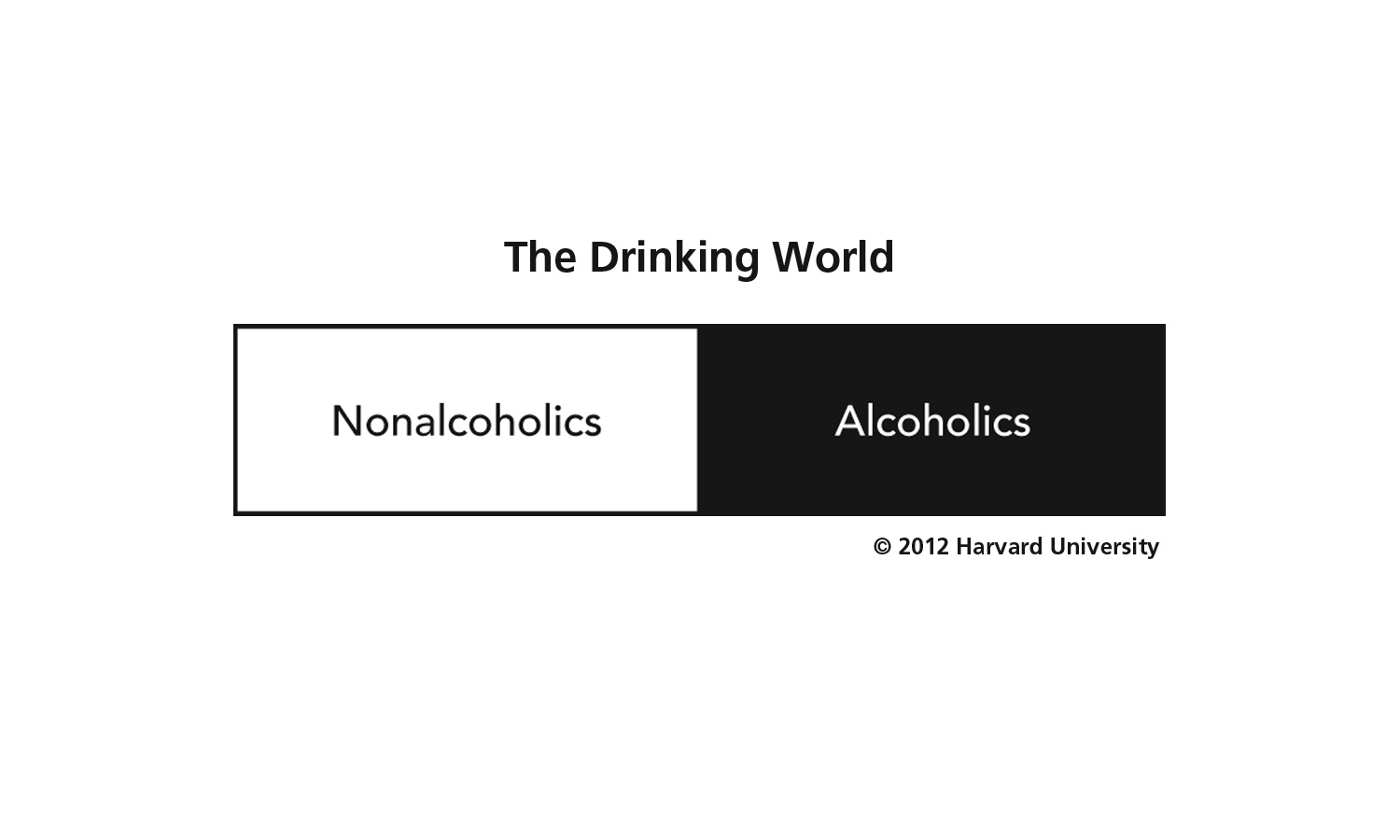 Although the intention of creating an official diagnosis of alcoholism was to allow a group of men and women who satisfied that diagnosis to get help, it has also led to a dangerous oversimplification of the real "drinking world." It has also given rise to a problematic concept called denial. People are said to be "in denial" when someone else -- a spouse, a doctor, a therapist -- says they are an alcoholic and they argue that they are not. It has also given rise to the mistaken belief that before an alcoholic can recover they must, first, accept denial and admit their alcoholism and, second, to accept that they have to abstain from drinking for the rest of their lives. In reality, I personally know many people who are in recovery who have not had a drink in many years, who have admitted that they were never really sure they were alcoholics but decided that abstinence was a better way of life for them. This give rise to the question: "Is there really a fine line that people cross into alcoholism?"

Dr. Rob Doyle and I have recently proposed a way of viewing "the drinking world" that we believe to be more accurate than the black-and-white thinking that is represented by he above diagram. Specifically, we believe that the real drinking world looks something like this:

What the above suggests is:

The largest group of men and women who are experiencing problems of some sort that are related to their drinking occupy that zone in the drinking world that we call "almost alcoholic." So when men or women whose drinking might place them fairly deep into this zone argue that they are not alcoholics, they may not be in "denial." That's not to say that these people are not experiencing behavioral, emotional, or physical problems related to their drinking; but the truth is that they are not yet dependent on alcohol, and abstinence may not necessarily be the only viable option open to them.

The Dark Side: Alcohol Dependence

Some people do slide into the extreme of alcohol dependence. The vast majority of these men and women have a history or trying to quit on control their drinking, without success. They've tried to "shift left" on the drinking spectrum, but can't manage to do it with any consistency. As a result they experience severe consequences such as failed marriages, dysfunctional family lives, lost jobs, and poor health. For this group, abstinence may indeed be the sane choice.

As the drinking spectrum also suggests, people don't simply cross over "lines" from one drinking zone to another; rather, they slip from one zone into the next, typically over a long period of time and so slowly that they don't realize it. Here are a few ways in which a man or woman might slip from the normal social drinking zone into the almost alcoholic zone:

Drinking to relieve stress (or pain).
You've come to rely on a few drinks to "unwind" or to relieve chronic pain.

Drinking alone.
Though there was a time when you drank only in the company of others, now you are just as likely to have one several drinks when you are alone.

Drinking to relieve boredom or loneliness.
Are you are retired, widowed, a single parent, or unemployed? Do you feel lonely or bored at times and find that a few drinks can be comforting?

Drinking to overcome social anxiety.
Are you likely to turn down invitations to social events where you know that no alcohol will be available? Or do you rely on a couple of drinks before going, in order to "loosen up"?

The above is only a sample of the reasons why people can slip into the almost alcoholic zone. They are usually only dimly aware -- if at all -- of this change in their drinking. In contrast, what they may be aware of (but not connect to their drinking) are things like:

Few almost-alcoholics "connect the dots" between consequences like the above and their drinking. And if someone were to suggest that they had a "drinking problem" (much less that they were alcoholic!) they would probably reject that idea. Yet the truth is that every single man or woman who ends up at the extreme end of the drinking spectrum first has to pass through the almost alcoholic zone.

Almost Alcoholic: Is My (or My Loved One's) Drinking a Problem? was written with two goals in mind:

So the "fine line" does not really exist. It is a myth that the drinking world is neatly divided into two categories of people -- alcoholics vs. "everyone else" -- where "everyone else" has nothing to be concerned about. The good news is that the large group of people who are almost alcoholics have options available to them that true alcoholics do not.