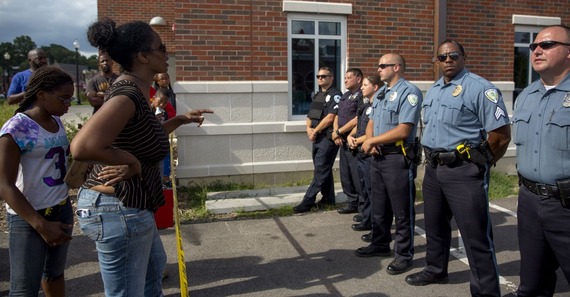 The problems in Ferguson, Missouri, will continue long after the grand jury's decision is announced. The tensions in the community will undoubtedly be exacerbated if the U.S. Justice Department declines to pursue civil rights violations against Officer Darren Wilson. The real problem in Ferguson is the fact that the residents are stuck with a police department that seemingly lacks ethnic diversity, appears racially insensitive and is unwilling to admit changes within are necessary. The problems of the Ferguson Police Department are cultural and systemic.

As a retired, 20-year veteran police sergeant, I reject the notion that a professional, tactically trained, gun-toting police officer would fear an unarmed teenager. Police officers receive an inordinate amount of training, first in the academy and then continued in-service training. Police officers should expect, by virtue of their occupation, that interacting with the community can at times be contentious. Police officers are expected to rely on their training and common sense if confronted with an argumentative and uncooperative citizen. Police officers are not expected to take it personally when a citizen fails to follow an order given. So for Officer Wilson to initiate a traffic stop and then immediately escalate the situation to a deadly-force incident is, in my opinion, outrageous.

According to grand jury testimony leaks, Officer Wilson shot and killed Mike Brown because he (Wilson) was in fear. Wilson feared unarmed Mike Brown, 18-year-old Mike Brown, wounded and bleeding Mike Brown. Allegedly, this was Officer Wilson's "state of mind" at the time he fired his weapon. OK, that may be true of the first two shots, but what about shots three through six? Police officers involved in a use-of-force incident, and especially a deadly-force incident, must explain the need for every round fired. What about Mike's state of mind? Well, we will never know, because Mike is not here to tell us.

As a black woman, I believe that unless and until there are real changes on that police department in terms of personnel, training and civilian oversight, there could be a repeat of the senseless killing of Mike Brown.

As a mother, I am bothered by disparaging comments made by Project 21's Joe Hicks referring to Mike Brown as "a small-time local thug," as if "a small-time local thug" somehow deserves to be gunned down in the middle of the street. I am bothered that anyone who does not side with the police department's version of events is labeled a "race-hustler" who is "undeserving" of justice. These statements were just a few of the comments attributed to Project 21, described as a black leadership network. I am disappointed by an unrepentant and unapologetic police department that will never admit to wrongdoing. I am saddened that this black life (Mike Brown's) does not seem to matter.

As a retired law-enforcement supervisor, I don't accept that a trained police officer need only say "I was in fear" and everything else that follows is somehow justified. Well, I say: Officer, if you are scared when dealing with a (black) community that you swore to protect and serve, then maybe you should holster your gun, remain in your car and call for backup. I have not heard or seen white police officers articulate "fear" when dealing with the white criminal community. Take Eric Frein: Here's a guy who shot and killed a police officer and seriously wounded another. It was reported that Frein left assault weapons and pipe bombs as though they were bread crumbs for pursing officers, yet he was "taken into custody without incident," captured with only a scratch on his nose, purportedly self-inflicted.

If the requirement for federal civil rights prosecution is an all-or-nothing case, it's time to change the law. Currently, federal prosecutors must prove that race was a motivator, that a defendant deprived the victim of a constitutional right, that the defendant acted willfully, and that the defendant acted under color of law and that the victim died. How does one prove that Officer Wilson was possibly dishonest when he testified before the grand jury that he was in fear for his safety?

And finally, sir, would your please return to the police station, turn in your badge and gun and seek employment somewhere else, because, Officer, I am in fear for my safety.

Cheryl Dorsey is a retired LAPD sergeant as well as a speaker and sought-after expert on important police issues making national headlines who has appeared as a guest expert on Dr. Phil. She writes and provides commentary on police culture and surviving police encounters. She is the author of Black & Blue (The Creation of a Manifesto): The True Story of an African-American Woman on the LAPD and the Powerful Secrets She Uncovered, an autobiography that pulls the covers off the LAPD and provides an unfiltered look into the department's internal processes. Visit Cheryl's website, cheryldorsey.net, and listen to her on Soundcloud.