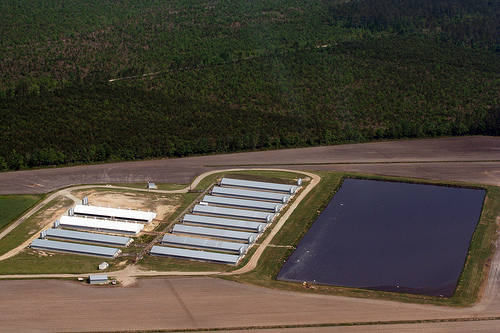 Swine confinement barns and a lagoon that holds swine urine, excrement and other facility waste produced at the Stilley Facility - a swine confinement operation that confines more that 11,000 hogs.

On Tuesday, January 14th, the Neuse Riverkeeper Foundation and Waterkeeper Alliance issued a Notice of Intent to sue the current and former owners and operators of the Stilley swine feeding operation, located near Trenton, North Carolina, to stop pollution caused by illegal waste disposal. The Stilley Facility confines more than 11,000 hogs for Murphy Brown, LLC. - a subsidiary of Smithfield Foods, Inc. - in the Neuse River Basin. The state has repeatedly documented violations at the Stilley Facility, but has not taken action necessary to stop discharges of swine waste or issued it a Clean Water Act (CWA) permit as required by federal law. Frustrated by government inaction, we stepped in to perform our own investigation and confirmed that the Stilley Facility continues to discharge swine waste into public waters that flow to the Trent River, and ultimately, the Neuse Estuary. We are seeking to work cooperatively with the facility to stop illegal swine waste discharges, and, if this is not successful, will file a CWA citizen suit to stop these illegal discharges of swine waste. The goal of this action, and others we are taking in partnership with the Neuse River Foundation, is restoration of the Neuse River Basin, which serves over a million citizens.

Not long ago, there were approximately 22,000 traditional family farmers raising 2,000,000 hogs in North Carolina. Beginning around 1987, nearly all of those farms began to be replaced with industrial swine "feeding operations" producing approximately 10,000,000 hogs in factory-style confinement facilities - primarily in North Carolina's vulnerable coastal plain. Since the advent of industrialized meat production, North Carolina has experienced both catastrophic and persistent pollution of its valuable coastal waters. After nearly two decades of pollution control efforts in the Neuse River Basin, the state reports that its efforts have not "achieved any significant decrease in actual nutrient loading," and the area is still plagued by recurrent algal blooms and massive fish kills that have serious negative ramifications for the economy, recreational use of the water and the livelihoods of local residents. More than a billion fish are believed to have died in the Neuse alone since the swine industry began operations. Although industrialized animal feeding operations are not the only source of pollution, they are a major source - there are an estimated 500 swine facilities in the Neuse alone - and, unlike other significant sources, discharges from these facilities are not addressed by North Carolina's pollution control plan. 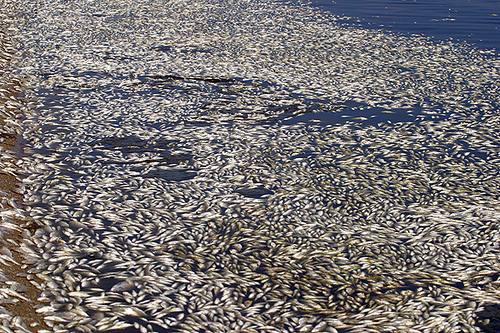 Illegal discharges of phosphorus and nitrogen from swine feeding operations and other sources in the Neuse River watershed are contributing to fish kills. Dead fish are pictured here along the shore of the Neuse River near Carolina Pines in 2012.

While the Stilley Facility owners and operators are responsible for operating in compliance with the CWA, hiding behind the shield of a contract is a multi-national corporation that owns the animals and oversees operation of the facility but wipes its hands of responsibility for the waste left behind by its hogs. Hong Kong-based Shuanghui International Holdings Ltd., backed by international investment firms and a Singapore state-owned company, recently acquired Smithfield Foods, Inc. - a corporation valued at $7.1 billion - to become the largest pork producer in the world. Shuanghui now owns most of the hogs and huge tracts of land in North Carolina, as well as the world's largest swine slaughterhouse - slaughtering around 35,000 hogs every day - in Tar Heel, North Carolina. Shuanghui also acquired Smithfield's business model and contracts with North Carolina growers, which attempt to eliminate corporate liability for pollution caused by its swine production business.

In North Carolina, swine confinement and feeding facilities store massive amounts of raw feces and urine in open, antiquated pits that can pollute the groundwater. Moreover, as the pits fill up, the foul smelling waste, which can contain high levels of pathogens, nutrients and other pollutants, is often sprayed onto ditched fields which can rapidly transport the waste into nearby streams and rivers. Poor waste disposal practices and widespread water pollution by the hog industry are well documented, but technologies are available to stop these practices and the resulting pollution.

In 2000, Smithfield entered into an agreement with the North Carolina Attorney General to fund development of environmentally superior waste management technologies for swine facilities. Several technologies were developed that practically eliminated the waste stream, but $17.1 million later, Smithfield declared the systems were not "economically feasible," and no further action has been taken to implement clean technologies. North Carolina has banned the use of lagoons and sprayfields at new facilities, but thousands of these systems remain. As this multi-national corporation takes the reins, it is time for our government to compel the phase-out of all existing swine waste lagoons. The cost for implementing the new technologies should be picked up by Shuanghui, which benefits from U.S. government subsidies, earns huge profits, and currently takes no responsibility over the waste produced by their swine at contract facilities.

Acquisitions like the Shuanghui-Smithfield purchase typically subject local economies to foreign market demands and investors' financial motivations, often resulting in natural resource depletion, pollution, increased unemployment, poverty, and income declines. Based on these factors, the future looks grim for any hope of change in Smithfield's practices as a result of this acquisition. It is time for Shuanghui to prove that it can be part of the solution - showing the world that a multi-national corporation can be socially responsible and invest in the health of the communities that it thrives on. This is Shuangui's opportunity to invest in superior technologies, assist its North Carolina contractors with the burdens of waste disposal, and stop polluting North Carolina's water resources.

The problems at the Stilley Facility provide an excellent opportunity for Shaunghui to step in and help its contract growers comply with the CWA. This is the first case in North Carolina against a Smithfield-contracted hog facility since the Shuanghui acquisition. Will Shuanghui stand up to the challenge and lead this industry into a clean future? Only time will tell - but the clock is ticking!