Thanks to factory farming's massive economies of scale, a lot of food today is disgusting or cruel or disgusting and cruel. Just when people stopped talking about cantaloupes with deadly listeria, "pink slime" hit the news. And just when people stopped talking about pink slime, ground beef treated with ammonia to kill germs, mad cow hit the news. Does anyone even remember the arsenic in the fruit juice?

Food scandals are so costly to Big Food, it has repeatedly tried to kill the messenger rather than clean up its act. In the 1990s it pushed through "food disparagement" laws under which Oprah Winfrey herself was sued by cattlemen in 1997 (Winfrey said she would never eat a hamburger again upon learning that cows were being fed to cows). Winfrey was acquitted and cow cannibalism was made illegal but the US still lost $3 billion in beef exports when a first mad cow was discovered in 2003. April's new mad cow will not help foreign trade.

Last year, Big Food introduced Animal Facility Interference laws in several states which make it a crime to "produce, distribute or possess photos and video taken without permission at an agricultural facility." The bills also criminalize lying on an application to work at an agriculture facility "with an intent to commit an act not authorized by the Owner"--in an effort to stop the flow of grisly undercover videos. The ﬁrst facility interference offense would be an aggravated misdemeanor but subsequent offenses could be felonies.

Of course, the Ag-Gag bills, as they were quickly dubbed, are anti-free-speech and would chill both whistle-blowers and news media (who couldn't legally even receive non-approved farm images). The bills were scorified by CNN, the New York Times, Time magazine and First Amendment and food safety activists and, luckily, were defeated in 2011. But they are creeping back.

Many farmers and agricultural professionals are miffed that the days of "it's-none-of-your-business" farming are over. Once upon a time, consumers cared only about the price and wholesomeness of food and didn't worry about--or videotape--its origins and "disassembly." Now consumers increasingly want to know how an animal lived, died, and even what it ate in between. Some of the newly engaged consumers are motivated by health, wanting to avoid hormones in milk, antibiotics in beef, arsenic in chicken, and who knows what in seafood. But many are also motivated by humane concerns.

Martha Rosenberg is the author of Born with a Junk Food Deficiency [Prometheus Books, $24.00].

Here are some shocking facts that Big Food would like to mute with Ag-Gag and food defamation laws: 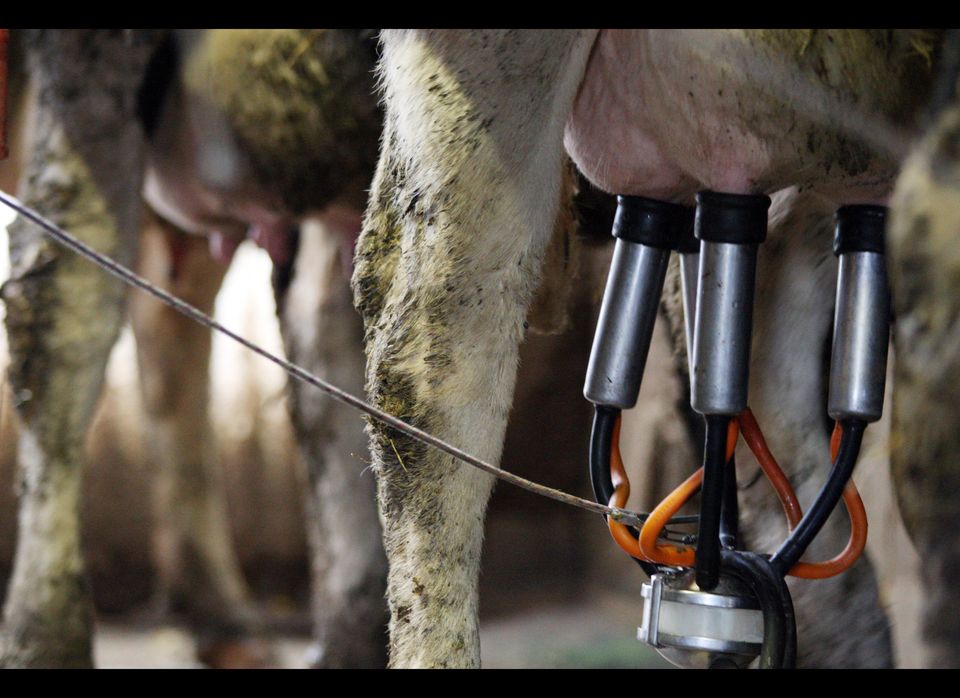 1 / 9
rBGH in Milk -- We're Drinking What?
Recombinant bovine growth hormone (rBGH), injected into dairy cows to increase milk production, was created by crossing cow DNA and E. coli bacteria. Yes, <em>that</em> E. coli. From the start, farmers and veterinarians worried about the udder infections it causes, the resulting need for more antibiotic usage and more. "I surely wouldn't want to eat from the hypodermic pockmarked section of the cow," said one farming critic as early as 1994. Banned in many countries and unlabeled here, rBGH-produced milk also contains <em>pus</em> and a protein associated with increased prostate and breast cancer risk called IGF-1. Still, Eli Lilly, who bought rBGH in 2008 from Monsanto insists, it "safely increases productivity of dairy cows" and helps "family farm owners."
Getty