I woke up on Saturday, November 14, to my usual laundry list of worries. Should I color my grey roots today or wait until tomorrow?

I hope I can speed-read those two library books before I get a "late" notice.... again.

I wonder how close (far away) I am from making rent this month.

I'd better take Malti outside right away this morning in case it starts to rain.

Then, while casually browsing Facebook, I saw this phrase:

I won't lie - reading those words, it felt like watching the Twin Towers all over again, just in somebody else's country this time.

Then I tumbled right into that empty-headed, open-souled, weightless and totally safe space inside that is always waiting for me - for just such times as these.

And then I read, and watched, and read some more and watched some more, trying to put at least a few reassuring pieces together before starting my day in earnest. 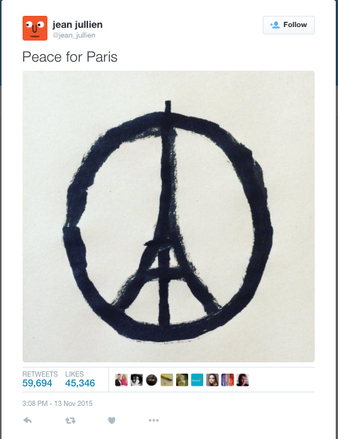 London graphic artist Jean Julian designed this simple, powerful image, which is now being used by people all over the world to express their support and prayers for Paris. (image courtesy of Jean Julian's Twitter account).

In the days that have followed, no such reassuring pieces have yet presented themselves. Instead, I have continued to wake up first into the shock, then into the pain, then into the tumbling-into-my-safe-space that helps me haul my legs over the side of the bed without wrestling too long or loudly with thoughts like, "why bother?"

I couldn't really argue, but I didn't want to agree.

I felt a little better after my boyfriend and I had a long talk, but only because we dissected human choice to the point where life itself began to feel like the ultimate inscrutable Zen koan - illuminating to the Dalai Lama perhaps, but certainly not to the likes of us.

Then I saw a video on the news where the terrorists were saying they have plenty more terror planned and that it includes us Americans.

And I went right back to being "here but not here" and thanking my lucky stars for wonderful lifelong coping strategies like dissociation.

Throughout all of this, I've been slowly making my way through Rising Strong, Brene Brown's latest book. In one section she talks about broken-heartedness and forgiveness. I didn't particularly like this section (mainly because I don't particularly like some of the painful feelings these two topics bring up for me).

But since they both seemed relevant to pretty much everything taking place right now all over the globe, I persevered. Brown writes:

The death or ending that forgiveness necessitates comes in many shapes and forms. We may need to bury our expectations or dreams.

Right as I read her words I realized I had been holding onto this expectation, this dream, that the terror was going to be over soon - that we were going to "fix" this untenable global situation once and for all so we could all feel safe again... forever and ever.

I kept reading. A few paragraphs later, Brown quotes Archbishop Desmond Tutu from his book The Book of Forgiving":

To forgive is not just to be altruistic. It is the best form of self-interest. It is also a process that does not exclude hatred or anger. These emotions are all part of being human. You should never hate yourself for hating others who do terrible things: the depth of your love is shown by the extent of your anger. However, when I talk of forgiveness, I mean the belief that you can come out the other side a better person. A better person than the one being consumed by anger and hatred.

I liked this idea that I could become a better person than my current person, who was chock-full of anger and hate and fear and all kinds of fantasies of playing the hero... or not... as in, what if it had been me in that arena that fateful night and I had had to make the difficult choice between saving someone else or saving myself...?

Then I finally realized I wasn't sure about anything, at all, and it was high time I stopped pretending that I was.

I also liked Tutu's reassuring assertion that hate and anger are a part of being human - i.e., that it is "normal" in a sense to be feeling this way at this particular time and for these particular reasons.

Then Brown asks this question:

What has to end or die so we can experience a rebirth in our relationship?

As I pondered this, I realized that I needed to allow my aspiration to be "better than all that" die. I had to let me be actual-me, not idealized-me. Actual-me is full of anger and hatred and fear at the moment. Actual-me is sad and disappointed and brokenhearted and really, really wanting to STOMP THE CRAP out of, well, everyone and everything that could threaten anyone or anything I value and love.

Or hide. Hiding is good too.

Actual-me, in actual fact, is not too admirable after all.

But actual-me is authentic, which perhaps is the next best thing.

The truth is, I might not ever actually fire fully loaded machine guns into a large and unsuspecting crowd (or strap a suicide belt around my own waist for later on before I could feel remorse for what I'd done). But I can - without any effort at all - find many instances in my personal life where I have "detonated" anger, hate, expectation, resentment and pain into my personal space, intentionally or unintentionally "killing" the joy in any innocent bystander unlucky enough to be standing nearby.

I can also look back and find a good chunk of years (20, to be exact) when my "suicide belt" of choice was an eating disorder.

And I can easily remember how, during those years, I worked hard to defend my allegiance to the cause of "thinner" against any and all naysayers, and even actively repelled offers of assistance or support in order to fully prove my commitment.

It was at this point in my ruminations that I opened my Instagram to read a message by Don Miguel Ruiz, Sr. He wrote:

All of the drama you suffer in your personal life is the result of believing in lies, mainly about yourself.

Suddenly it felt like I was hearing the same message from so many trusted mentors all at the same time.

In the wake of the shock of Paris, I had allowed myself to adopt and believe what I now realize is a lie I've been telling myself - that this is the best we, the world, which includes me personally, can do, and there is no way it can or will ever get better.

It does feel like many people do believe that, and that their reasons are oh-so-airtight and valid, and I totally get why they believe it.

But I still don't believe it, even when it causes a lot of pain or makes me feel like the lone dissenting juror arguing for leniency in our planet's murder trial.

I don't believe that any of this is really about religion or God or even money or power, but I do believe it is about fear and loneliness and unrequited love and unresolved pain and generations of "us versus them" woven into our DNA - and these are all things we can help each other with, one teensy tiny step at a time.

In the wake of reading Ruiz's statement, I am slowly finding it easier to breathe once again.

I can breathe easier again because I have remembered it is my choice to breathe or keep holding my breath.

In the same way, Ruiz helped me remember it is my choice to stay stuck in the misery of seeing only humanity's smoking, downward-facing trajectory or break free to visualize an alternate route where we don't all crash and explode because we learn - finally - how to work through all this together.

I have also remembered it is my choice to believe in hope, to believe we each and all together have endless second chances, and to believe there are more than enough examples of beautiful goodness and service and compassion and love in Paris and all places to inspire us all to keep fighting and praying for a better future than our present moments suggest we have any good reason to hope for.

(For a dose of instant upliftment, just check out the Twitter hashtag #PorteOuverte - "Open Door" - this hashtag is being used by Parisians who can offer shelter, food and assistance to victims and their loved ones.)

It may never happen.

But rather than spending the rest of my personal allotted days feeling disenfranchised with and doomed by my own species, I have decided to choose the opposite.

I will instead persist in believing there is a path that really does include the terror being over for good.

Most importantly, I will persist to invest myself in continuing to identify and heal my own dark pains so I may do less harm and more good and, in so doing, make my contribution - the only contribution I truly can make anyway - towards ending the terror for all of us.