It seems like every day brings more disturbing news about Russia's persecution of its LGBT community.

The blogosphere is abuzz with the news that Dmitri Kisilev, the anchor of the most-watched television news show in Russia, has taken up proselytizing anti-LGBT hatred and vitriol. In fact, Kislev recently said on live television that Putin's draconian law banning "gay propaganda" doesn't go far enough:

I think ... [gays] should be banned from donating blood, sperm. And their hearts, in case of the automobile accident, should be buried in the ground or burned as unsuitable for the continuation of life.

What makes this even more sinister is the fact that Kisilev's TV station, Rossiya 1, is owned by the Russian government. That's right: Vladimir Putin's homophobic government is Kisilev's employer, and Kisilev is falling right in line with his boss' homophobic agenda. (It almost makes one wonder whether the Russian state might be deploying key members of the state-owned media to double down and amp up the anti-LGBT hate.)

Procter & Gamble, an American company that owns brands like Crest, Gillette, Ivory, and Tide, is Russia's biggest television advertiser. The Wall Street Journal reported last year that "barely an hour goes by on Russia's biggest TV networks without at least one ad from Procter & Gamble." The Russian government owns or is a major shareholder in most of Russia's television stations, so every time Procter & Gamble purchases an ad on those networks, the company puts money directly into the pockets of the Russian government and finances Putin's bloody crusade against LGBT people.

Procter & Gamble is also a Worldwide Olympic Partner of the International Olympic Committee and a sponsor of the upcoming -- and controversial -- 2014 Winter Olympics in Sochi, Russia.

Companies like P&G are a force in the world. ... With this stature comes both responsibility and opportunity. Our responsibility is to be an ethical corporate citizen -- but our opportunity is something far greater....

But Procter & Gamble's responsibility and ethical obligations extend beyond America's borders. That's why I'm answering the call that Michelangelo Signorile made right here on The Huffington Post to hold the company accountable for the way it spends its money in Russia. I've launched a change.org petition calling on Procter & Gamble to pull its ads from Russian government-owned TV stations. 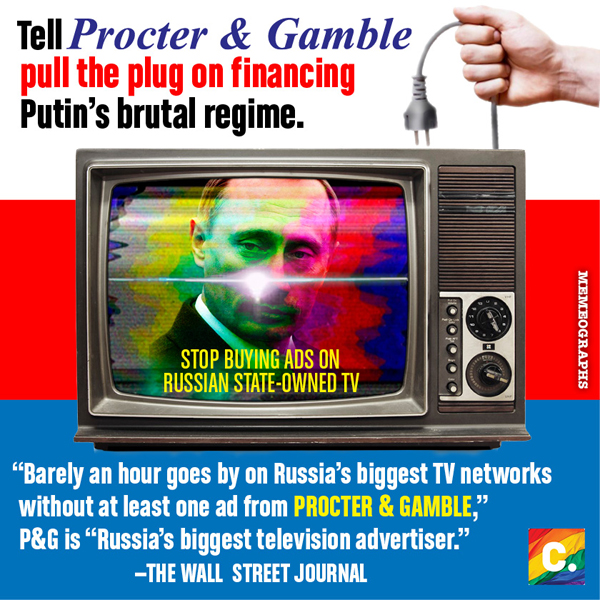 Special thanks to Scott Wooledge and Memeographs for their invaluable assistance.