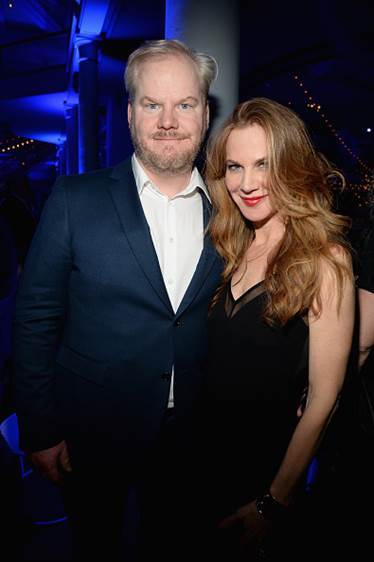 Perhaps you've noticed Jim Gaffigan is pale. He doesn't make a big deal of it. Okay, it's the centerpiece of a carefully orchestrated comedic symphony, where each note hits an observation that annoys him, usually about himself. The cleverness is in the way Gaffigan can get two jokes out of each observation. First: the exposition of his own embarrassment and inability to function properly in society is one laugh; then secondly: he owns each failing more proudly than a moon landing. Wait, there's a third laugh -- the one he gets commenting on the same joke in a high squeaky voice as if he were a horrified audience member. That's what one calls extremely efficient laugh economy.

That he makes it all seem so effortless is a nod to his decades of hard work at his craft.

"Most of my comedy is a romance with laziness, which is something I haven't been able to indulge in, in quite some time," he says. "Which is ironic," says his wife Jeannie. "His whole act is about not wanting to get out of bed, and he's the hardest working guy I know."

I spoke with the Gaffigans recently in New York, in a rare hour of downtime they had inbetween writing and producing their new television show The Jim Gaffigan Show on TV Land, as well as working around the schedule of Jim's national tour, "Contagious" which has him poised for his first appearance at Madison Square Garden, in two weeks on December 12.

I come from a very big family. Nine parents.

Going back several decades you can count only nine stand up comics who have sold out Madison Square Garden. Gaffigan will make it ten. Playing the Garden, the big brass ring for stand up comics, means one thing. You're in the culture in a new way, you've transcended your demographic and your fandom. People tell your jokes and don't even know how they heard them. It's a good problem to have.

The Gaffigans have had a well earned ride to the top of the comedic peak. Jim started in stand up, side-stepped into acting and voice over work, returned to stand up more successfully, recorded his albums and comedy specials (he has four albums in the top ten on iTunes, and the last two -- Obsessed and Mr. Universe -- were nominated for Grammys), they've had the most watched stand up special on Comedy Central since 2013, and have been on the New York Times best selling author list twice.

This year brings them the second season of their new TV show, which is a semi-autobiographical account of their life together. What slackers.

What makes the couple unusual is not their strong work ethic, or their proud commitment to co-parenting their five children. It's their teamwork at home as well as in the studio and on the road. 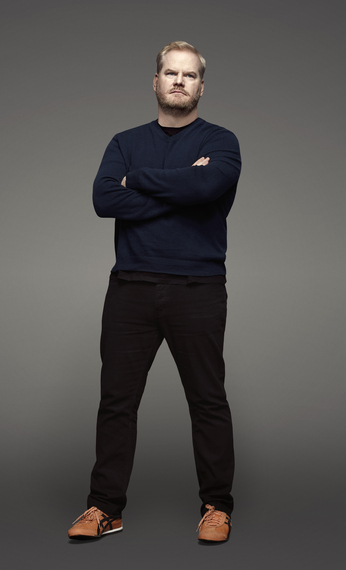 "It started right away," Jeannie says. "We never had a history or time when we weren't collaborating on something. It happened on our first date. I was doing a theater program and I asked him to volunteer for it and work with inner city kids, and then his pilot got picked up on CBS and he asked me if I could coach him on his acting." That was 15 years ago. The pilot started a series called Welcome To New York in 2000, but was short lived.

"He was just doing clubs at the time. If you can believe it, people were producing their own CD's back then. And Jim asked if I could produce a CD for him. So I literally had him go to different venues, and had him do the same sets, and cut them together on my home computer. The first two CD's Jim ever came out with I produced."

"The collaboration is pretty unusual," says Jim. "My friends are comedians, and when you first start out with material you realize it's pretty individual. So we didn't see writing two books together, or this show, or even my stand up. I was resistant. But it became so obvious that we were a great writing team by King Baby."

"I was always producing the big picture," she says. "Giving performance notes and placing cameras." "She makes it better," he says. "I see things he doesn't," she says. "Also we've never had a fight," he says dead pan.

You know what it's like having a fourth kid? Imagine you're drowning, then someone hands you a baby.

The new TV show is a big deal. And it wasn't a slam dunk. Optioned but not bought by NBC, the show moved to CBS where they did two pilots, but had no series, until finally finding a home on TV Land.

I ask them if they're feeling pressured or overwhelmed by it all. The question being: How do they handle a schedule that would give most people four nervous breakdowns a week?

"Well, Jim opened for the Pope a few weeks ago," says Jeannie laughing. "I'm in the place where I can't think about how amazing it is, I just have to take each moment as it comes." "It's an insult to the universe to turn down these opportunities," says Jim. "Not that we aren't smart about it, but we have got to do it. It's great problems to have. Two weeks ago, we juggled between working on a movie, writing episodes, flying to do another movie on the same day, doing two shows in Boston, and writing a script."

All I did was eat constantly. And boom I'm fat. It seems unfair.

Gaffigan's comedy choices and the tone in his work are very specific. He's been called family friendly and clean, and those two words can make a body of work sound about as exciting as a bar of soap. What people should be saying is he's master of observation, delivers each joke in a comedic strike zone with debilitating wit and all with a deceptive self depreciating shrug. As a professional script writer myself, I can tell you it's a lot easier to get laughs with blue material. A pro will tell you the simple test: Try the same joke without the curses and see if you get a laugh. Gaffigan faces that reality with every joke on purpose.

"There's always a little bit of angry behind comedy. But you can bring lightness or darkness," says Jim. "We all have funny friends who we laugh with, and then maybe we feel a little dirty afterwards. Maybe their laughs came at the expense of someone else. I certainly don't want my comedy to be a lesson. But I do want people to maybe laugh at themselves and bring a little bit of light to the animals that call themselves human."

Most of the time, I feel entirely unqualified to be a parent. I call these times being awake.

There was a moment when they flirted with casting Jeannie as Jim's wife in the show, playing the role of herself to himself, but they decided it was best to have her eyes on everything. She's in wardrobe fittings, approves choices on the props, she approves locations many of which are the Gaffigan's actual haunts in N.Y.C. like Katz's deli. "Especially when Jim is in 95% of the scenes," she says. "Having me as new eyes is more valuable to him, as we both conceived it and we both know what we're going for. How many comedians do you know who are brilliant, who then do a TV show that was nothing like their comedy and then it's gone?" She points out. "We do different things. Jim has a really focused stand up comedian economy of words. He finds small things and has big ideas about it. My skill is more long form and about structure and organization. We're both strong where the other person isn't." 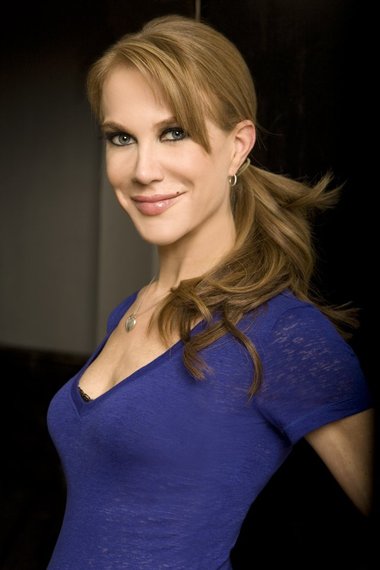 "Jeannie is a master of details," he says. "TV wins me over when I'm lost in it and that's the detailing. It helps that there are two people who wrote it -- and there isn't a hierarchy where the writer has to defer to an Executive director who defers to a director. I've worked on so many shows where people just wanted to say they worked on television. Some people are making up for what happened to them in High School. But success is an opportunity. We're not doing it to walk into a restaurant and get a great table. We get the authority to create the type of show that we want to watch. We get to say hey, 'it's going to go like this,' because we have certain stories we want to tell."

Actually, the reason I look like this is because my father was from Sweden and my mother was Elton John.

Because they're on TV Land, they've decided to treat every episode like it might be the only episode someone stumbles upon when they're changing channels. Not a bad idea in the sea of possibilities between network, cable and streaming series. This informs how the Gaffigans approach each episode. It's not about chipping away at a contract, or fulfilling an order. It's knowing that they are going to do something that serves their point of view, serves the work; respects the opportunity they've been given.

"When the kids are gone at school is when most of the writing gets done," says Jeannie. "We have two writers assistants and us. It used to be at night when we worked, but I have to get up at six in the morning every day, that's not going to happen anymore." "If we had three kids, we'd discuss it over a glass of wine at 11 p.m.," says Jim. "With five kids we talk about it while dressing for the park or during dinner." "Well," says Jeannie. "If we weren't doing the tv show, we'd probably have seven kids."

It's clear from talking to the Gaffigans that they enjoy their successes, but don't limit themselves by it.

"Things that can get you to the next level are so valuable," says Jim. "And when there's that writing partner who you live with, and you plant this idea while you get the kids to bed and can re-visit it when you can catch your breath, or get the kids ready to go to the park, that's pretty amazing."

There is the vegetarian Hot Pocket for those of us who don't want to eat meat, but would still like diarrhea.

The constant problem, Jeannie admits ironically, is being pulled away from family. "March through May was really hard on me as a mom, the weekends were the only time I got to spend with my kids and of course early morning and middle of the night is always there. So that was really, really hard for me. We had 4 or 5 babysitters picking up kids and coming to set. Our two-year-old was the two-year-old on the show, so that was a way to be with him. But then in July and August, we went on a 30 city bus tour with all of our kids." 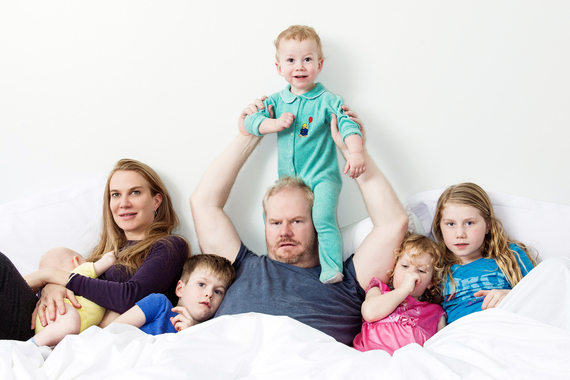 Their lifestyle would be demanding on any level, the intense success adds a new dimension. It's made the important things in life most clear.

"Certain things that aren't precious are never in danger of being precious," Jim says. "Like sleep. Or 'I need time to watch football'. If you can't fight for it, good luck. It's gonna lose. That's a huge joke in our family, 'we have no life'. But we're choosing to stay in with our kids on Friday and Saturday when I'm not doing stand up and we wouldn't have it any other way."