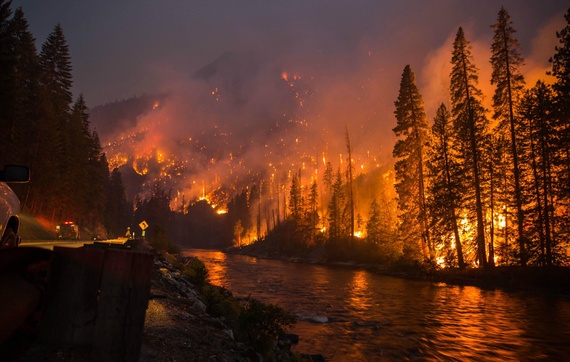 Climate negotiators from countries around the world this week wrapped up a key round of discussions in the lead up to the big finale expected this December in Paris. As negotiators walked out the doors of the conference hall in Bonn, Germany, pundits poured over the results to assess the progress of the talks. But perhaps the clearest signal came in form of alarm bells rung in the climate denier camp.

CFACT, one of the leading voices in the climate denier camp and famous for outright lies about climate science as well as a complete lack of shame, immediately blasted out a mass email to its supporters at the conclusion of the talks. Lying is what the bad guys do when they can't win on the facts. And true to form, CFACT invented some whoppers about this round of climate talks.

One of the key breakthroughs made in Germany last week was a pair of proposals put forward on the issue of loss and damage stemming from climate change. From wildfires in the western U.S. to hurricane storm surge on the eastern seaboard fueled by rising seal levels, the impacts of climate change are hitting home, leaving loss and damage in their wake. It's a global trend, driven by decades of carbon pollution. The poorest developing countries are the most vulnerable. So they are hit the hardest.

The U.S. is leading the effort to ensure Paris produces a comprehensive and long-term global climate agreement. And to that end the U.S. used last week's negotiating session to propose a provision addressing the issue of loss and damage for inclusion in the Paris deal. Potential measures under such a deal include helping developing countries with building an early warning system for extreme weather events and creating a displacement coordination facility to deal with those who lose their homes as a result of extreme weather.

This U.S. administration has taken a pretty hard line against defining the issue of loss and damage as a matter of liability or compensation. Nevertheless, CFACT claimed exactly the opposite, going into hysterics and hyperventilating about President Obama in its email to supporters - and of course repeating the usual litany of lies that the earth isn't warming and climate change hasn't affected extreme weather.

Interestingly the proposal submitted in parallel by developing nations does not push for compensation or liability. In fact, the words liability and compensation don't even appear in their proposal text.

Nations from around the world are increasingly converging on an agreement to address climate change. From that movement, it's already clear that the Paris agreement won't solve the problem of global warming all in one go. But at the same time, it's also clear that the deal is shaping up to be a good first step, a good permanent foundation that covers all the bases. You can tell just by the way the climate deniers are calling the alarm and whistling up the attack dogs.

Buckle-up your seat belts, folks. The climate deniers have arrived. It's going to be a rocky road through Paris.