The National Museum of China has just opened on Tiananmen Square, and, as ARTINFO previously reported, its space of 2.07 million square feet just edges out the Metropolitan Museum (at 2.05 million square feet) for the title of the largest museum in the world. Over a decade in the making, and with a $400 million price tag, it's a key piece of China's efforts to exert the "soft power" of culture on a grand international scale. The museum merges two prior institutions: the Museum of Chinese History and the Museum of Chinese Revolution. But, most Western observers agree, the history and the revolution have been so thoroughly puréed as to render them unrecognizable -- but easily digestible. 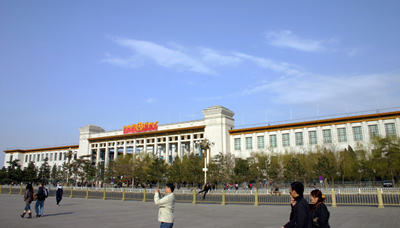 The National Museum of China in Beijing's Tiananmen Square is now the largest museum in the world. / Courtesy Wikimedia Commons

The museum opens with a show called "Art of the Enlightenment," which draws from several German museum collections and will be on view for an entire year. Does this mean that the signature Enlightenment virtues of individual freedoms and human rights are embraced by Chinese authorities? This seems doubtful, considering that dissident artist Ai Weiwei -- whose activism and status as a public intellectual makes him the closest thing China has to Voltaire -- was just arrested on Sunday.

Below, ARTINFO takes stock of what the international media has to say about the mega-museum and what it means for China and the West:

In a lengthy piece, the New York Times's Ian Johnson revealed the deep incisions that Chinese leaders have made to their history in this new museum. How is the Cultural Revolution covered? Through "a single photograph and three lines of text." The consequences of Mao's Great Leap Forward -- including a famine that killed 20 million people -- are omitted. "One tradition has remained firmly in place: China will not confront its own history," Johnson writes. According to an archaeology professor at Peking University who was consulted on the exhibition and who asked to remain anonymous, the museum exhibits propaganda, not history: "it ignores the conflicts, which real history shouldn't do." One more thing: It's no coincidence that the museum ended up 20,000 square feet larger than the Met. Chinese officials called Martin Roth, director of Dresden's state museums and an informal consultant on the project, asking for the square footage of different world museums in order to make sure that theirs would be the biggest.

The Art Newspaper's András Szántó had a different take, writing a surprisingly laudatory assessment of the new museum in which he called the European Enlightenment show a "bold" and "timely" choice. Szántó asked Dresden curator Cordula Bischoff to name the object that best represents the exhibition's message, and she selected an image of Voltaire holding a lantern that shines light beyond the picture frame. National Museum curator Chen Yu agrees: "This picture is a metaphor of the Enlightenment."

For the German newspaper Die Zeit, the museum and its inaugural exhibition send a clear message: "The Chinese are an open nation. Open for everything German." There's a painful irony in the fact that the Enlightenment -- "the time of freedom, happiness, brotherhood, and human rights" -- is put on display on the very square where the 1989 student democratic rebellion was brutally put down by Chinese authorities. The Chinese have rewritten their own history in the institution, even using the term "rejuvenation" instead of "revolution." In fact, they've whitewashed their own history to the point of non-existence: "everything is the present; there is nothing of the past to see." The unbylined piece ends with the writer's surprise that "Germans, with their own history of dictatorship, are so willing to serve this narrow freedom" offered to Chinese citizens.

Der Tagespiegel points out that the German museum directors working on the exhibition have defended themselves against rampant media criticism by invoking the need for "change through rapprochement." But it's a strange kind of rapprochement, indeed: foreign journalists who want to interview Chinese visitors to the museum can only do so in the presence of police minders.

The German media has also focused on another signal sent by Chinese authorities: China scholar Tilman Spengler was denied permission to travel to Beijing for the museum's opening with foreign minister Guido Westerwelle and other German officials because he was deemed "no friend of the Chinese people," according to Der Spiegel. This designation is believed to stem from Spengler's attendance at a ceremony in September when imprisoned dissident Liu Xiaobo received the Hermann Kesten medal, an annual German prize for efforts in support of persecuted writers. Liu Xiaobo, of course, went on to win the Nobel Peace Prize, much to the Chinese government's chagrin.