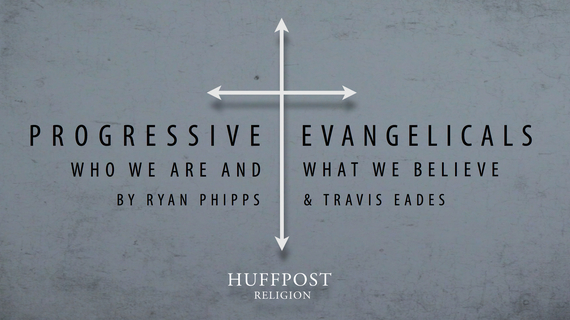 There's a story in three of the four gospels where Jesus stages a protest in the temple during Passover. He releases the animals that were being sold for sacrifice, he overturns the moneychanging tables, and he rebukes the merchants for taking advantage of the poor.

The story ends with Jesus shouting, "Tear down this temple, and I'll rebuild it in three days!"

In John's gospel, there is a related passage where Jesus explains that "this temple" he was talking about was his own body. He foretells that he will be killed by the Jewish authorities, then rise from the dead three days later. Meaning, everything that formally took place in the temple would soon be available in Jesus himself.

So what happened in the temple? Well, a lot.

- forgiveness of sins through sacrifice

- healing of the sick

- and most importantly: getting close as one could possibly get to the presence of God

The temple was constructed in a series of concentric boxes. 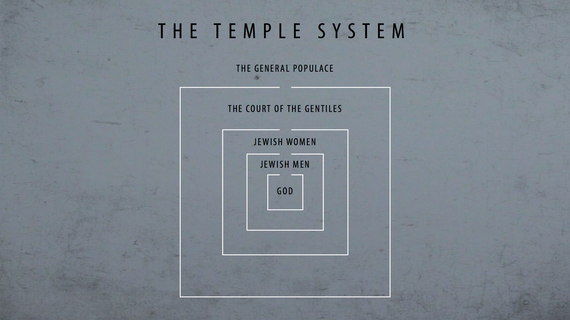 At the center of the temple was a room called the "The Inner Court." This is where the presence of God dwelt. It was the most exclusive room in the ancient Jewish world. Only the high priest had access to this room, and even then only on certain days of the year.

The next court was called "The Court Of The Jews." Only Jewish males had access to this court.

Next, was the "The Court Of Women." Jewish Women, no matter how well they behaved were separated from God by two giant walls.

The outer court, where the Jesus staged his protest was called "The Court Of Gentiles." This is as close as non-Jewish people were allowed to get to the Divine Presence, whether male or female.

Humankind's closeness to God in this culture was limited by one's ethnicity, gender, and religious pedigree. The Gentiles were kept at a distance. They were the original group of people who "were welcome to attend," but not "welcome to participate fully" in the sacramental aspects of the Jewish religion.

What infuriated Jesus, then?

Could it have been the walls that were constructed to keep people separated from one another and from God?

Is it possible that he was outraged by all of the segregation taking place in the Name of God?

If you are a Christian, questions like these are still as relevant today for the "people of God" as they were back then.

How would Jesus feel about the religious practices of Evangelical Christianity today, were he living among us?

- a church system that STILL qualifies people based on socio-economic status, race, political parties, and gender.

- a system that welcomes those who identify as LGBTQ until they decide that they want to baptized, take communion, or serve in a greater capacity 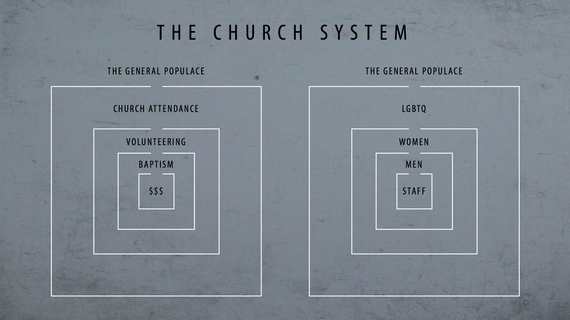 We are proud to call ourselves Progressive Evangelicals because we do not support this kind of system... and we don't think that God does either.

Were Jesus in some of our churches today, he'd likely be turning over communion tables, dashing offering plates into pieces, baptizing the marginalized, and performing ordination ceremonies for women.

When we take an honest look at the life of Jesus, we begin to see that tearing down walls is more Christlike than building them.

If there is anything solid we can plant our flag in, it is in the example that Jesus left behind for us to emulate- making the innermost rooms of God available to all people. 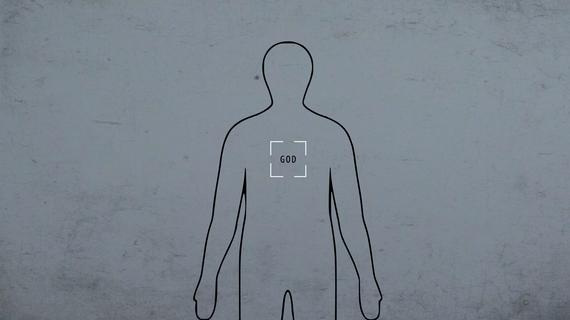 We long to be Christians that are known for this message about Jesus.

If the message of our faith doesn't read like good news to people, perhaps we aren't evangelical at all. Indeed, we may be something else.

Ryan Phipps and Travis Eades are pastors at Forefront Church in Manhattan, NYC. Forefront is a vibrant, growing congregation dedicated to cultivating a just and generous expression of the Christian faith.

Learn more about Forefront at forefrontnyc.com