The Progressive Change Campaign Committee raised over $100,000 online to fund the ad, which will be published in the paper this week. It features a petition signed by 400 former Obama campaign staffers, 25,000 Obama volunteers, and 40,000 Obama donors that states health care reform without a public option is not "change we can believe in." The full page can be seen at ActBlue, where the group is now raising money to turn it into a television spot featuring Obama organizers.

The ad features a quote from Lance Orchid, Obama's Deputy Field Director in Georgia: "President Obama, I started making calls for you during the South Carolina primary from my recovery bed -- after a nearly fatal accident. I couldn't afford health insurance and racked up big bills. I worked for you because I believed you could bring real change on health care. The public option is that change -- please don't disappoint me and the millions of people who believed in you." 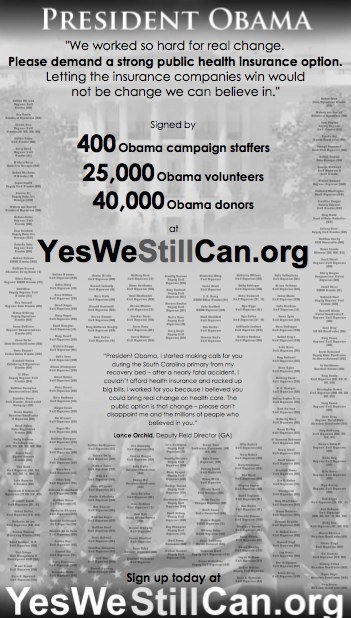 Obama is expected to voice his support for the public option in an address to Congress Wednesday night -- as he did at an AFL-CIO picnic in Cincinnati on Labor Day. For the PCCC, that's not enough.

"To avoid losing the grassroots army that got him elected, President Obama needs to do more than express a preference for the public option," PCCC co-founder Adam Green said. "He needs to draw a line in the sand and fight hard for it."