Four years ago, in a small sewing cooperative in Rwanda's capital city of Kigali, yoga instructor and author Deirdre Summerbell stepped in front of a class of a dozen frail women, each standing on a green or purple mat, and asked them to move their bodies in a series of twists and bends that make up the basic practice of Ashtanga yoga.

The women, HIV-positive survivors of the widespread rape that occurred during Rwanda's 1994 genocide, reacted with confusion and trepidation.

"Their jaws dropped, and they opened their eyes wide during my demonstration," Summerbell, 55, told The Huffington Post. "When I finished, a young woman put out her hand and said, ‘You know, that's for children, and we have already reached old age. We are sick.'" The woman was 28.

So began the first class offered by Project Air, an initiative that uses yoga to help over 400 HIV-positive Rwandan women and their families cope with the trauma they endured when an estimated 800,000 Rwandans were killed in only 100 days -- and countless women were raped -- as the Hutu majority tribe tried to wipe out the Tutsi minority. Even after the violation, mutilation and murder were over and the machetes were sheathed, the bodies and minds of the Rwandan women Project Air serves remained battlefields. While their immune systems struggled to fight even the most common illnesses, their minds were warding off traumatic flashbacks of war.

Summerbell wasn't surprised by her students' early skepticism. In fact, when the non-profit Women's Equity in Access to Care and Treatment first approached Summerbell in 2007 to helm the project, she declined.

"I thought that it was silly and the last thing these women would probably need." said Summerbell, who grew up in Tanzania, where she witnessed what she describes as Westerners' attempts to institute ineffective foreign practices in African culture.

But when Summerbell, and then her students, decided to give the project a try -- despite the students' physical and emotional trauma and the fact that women's participation in physical activities of this nature is taboo in Rwanda -- they found the results were both immediate and profound.

"After the third lesson, a shy woman came up to me, took my hands and said that she had slept for the first time in the 14 years since the genocide," Summerbell said. "She wasn't alone. Women will tell you that before yoga, they were crippled with aches and pains; they felt old. Now they crave yoga because when they feel physically stronger, they feel more confident and optimistic."

Given these positive results, what began as a three-month experiment is now in its fourth year. It is the first yoga initiative to be endorsed by the United Nations and is the only yoga project to be partnered with UNICEF. Organizers are looking to expand the yoga program to other warring and post-conflict countries.

Project Air started as one aspect of the holistic treatment offered by WE-ACTx, which was formed to 2004 to provide a full spectrum of health care to HIV-positive Rwandans, with a special focus on serving female survivors of genocidal rape and violence and their children.

Although only approximately 5 percent of the Rwandan population is estimated to have HIV/AIDS, UNICEF suggests that the disease prevalence is 10 percent among women.

And while not all cases of HIV/AIDS in Rwanda are linked to the genocide, a 2004 Amnesty International report titled "Marked for Death" found the conflict contributed significantly to the proliferation of the disease. Of the 250,000 to 500,000 women who were raped during the genocide, Amnesty estimates more than 67 percent of the victims contracted HIV and AIDS. The UK-based Survivors Fund organization reported that many of the infections were systematically planned, and that HIV-positive men were used intentionally as a weapon of the genocide.

The purpose of Project Air's classes is not so much to ameliorate the physical symptoms of HIV and AIDS -- Summerbell is not a physician and could not point to scientific studies that link yoga to improving the immune system -- though she said she had seen her students' disease markers, including disrupted sleep patterns and poor appetites, improve.

The program works collaboratively with five local genocide survivors associations, the Rwandan Ministry of Health and the Rwandan National AIDS program, aiming to help its students cope with the emotional effects of the trauma they endured.

In the U.S., the Veterans Administration has used yoga to assist veterans coping with PTSD after returning from war, and a small 2010 study funded by the U.S. Department of Defense and conducted by Sat Bir A. Khalsa, an assistant professor at Harvard Medical School, found that veterans' symptoms improved after a 10-week yoga class.

According to Dr. Mardge Cohen, the medical director of WE-ACTx, who has researched the AIDS pandemic for more than two decades in Chicago, Boston and Rwanda, Project Air has had the same effect on its students.

An estimated one in three Rwandans suffer from PTSD as a result of the genocide, according to a 2009 study by the Rwandan Ministry of Health; that includes many rape victims.

"[WE-ACTx] makes sure that we integrate mental health," said Cohen. "Many of the women who have also attended [Project Air] yoga sessions say that the support they get from doing this with other women as well as the strength they gain from the physical exercise of the manipulation of yoga allow them to feel like they are able to move on and move forward from their PTSD," Cohen, 59, said.

Summberbell said Project Air yoga classes have allowed women who have felt stiff and elderly to experience dramatic and immediate emotional benefits, as they jump and play joyfully during the class.

"They are allowed to have an hour doing nothing else but lift their hands, jump up and do tricks that they thought only children can do, and this produces such an amount of glee," Summerbell said. "Everybody laughs, almost more when they fall than when they succeed; everybody plays. It is the most giggly group."

The services that Project Air provides its students aren't limited to the yoga mats.

"Rwanda is unbelievably expensive and the sick are very poor," Summerbell said. "The lucky ones eat every day, the unlucky every other day, and you can't ask people with a low caloric intake to do Ashtanga. So we feed them."

Project Air also has begun to provide clothing. While some of the wealthier students come to classes adorned in their finest and brightest clothing -- Summerbell has begun to discourage headdresses as they are not conducive to headstands -- the instructors began to notice that the women in cheaper shrouds were avoiding certain poses.

"They couldn't afford underwear, so we quickly regrouped and provided trousers," Summerbell said.

THE CHILDREN, THEN THE MEN

Even though Project Air focuses primarily on the traumatized victims of genocidal rape, it has quickly expanded in size and scope. When the program was only in its sixth week, Madonna heard of the program and donated $250,000.

Now, in addition to its work with adults, Project Air serves 300 to 350 HIV-positive children, most of whose parents are deceased. Rwanda has approximately 160,000 orphans as a result of HIV/AIDS.

According to WE-ACTx's Director of Clinical Systems, Chantal Benekigeri, many of these children face an overwhelming stigma.

"For children who lost their parents and live with other family members, sometimes their family members know [they] have HIV and stigmatize them," Benekigeri, a 47 year-old Rwandan, said. "Sometimes [the orphans] can't eat at the same table."

Summerbell said that without families to protect them, pre-pubescent orphan girls are more vulnerable to physical and sexual abuse.

"They are sitting ducks," Summerbell said. "We are trying to put a special focus for them on Ashtanga yoga because it is very athletic and we want to develop their confidence and strengthen them so they are less likely to be a target and feel like they don't deserve this treatment."

But this new focus has presented new challenges. Soon after starting to work with girls and young women who were victims of domestic abuse, Summerbell and her colleagues realized they needed to take a broader approach.

"If you get a woman to feel strong and be stronger, and you don't help the men understand these changes, we can end up doing more damages," Summerbell said. "So we began with a large group of men [enrolling in the yoga programs]. They have become some of our most enthusiastic students and respond to it."

Through yoga, Project Air aims to change men's behavior and their mindsets.

"We teach them that self-control is a form of strength," Summerbell said. "Strength is when a body and mind are under the dominion of an individual, and when that individual loses control and descends into violence, that is a weakness of the mind and body."

While Project Air currently operates only in Kigali, there are efforts underway to extend its reach beyond Rwanda's borders and beyond its original focus on populations with HIV or AIDS.

With the help of UNICEF, Summerbell wants to broaden Project Air's programming to reach other African conflict and post-conflict zones, extending services to vulnerable women and children who are not HIV positive. She has spoken to Heal Africa, an organization that provides holistic healing for people in the Democratic Republic of Congo. According to the American Journal of Public Health, approximately one woman is raped every four minutes in the DRC.

"We want to expand this project to other vulnerable groups we work with, such as street children, former child soldiers, adolescent survivors of violence," wrote Francesca Morandini, UNICEF Rwanda's Chief of Social Protection and Governance for Child's Rights, in an email.

"There is so much more to do," Summerbell said.

To learn more about Project Air or make a donation, visit project-air.org.

View our slideshow below to see pictures of Project Rwanda in action:

Women Living In The Black 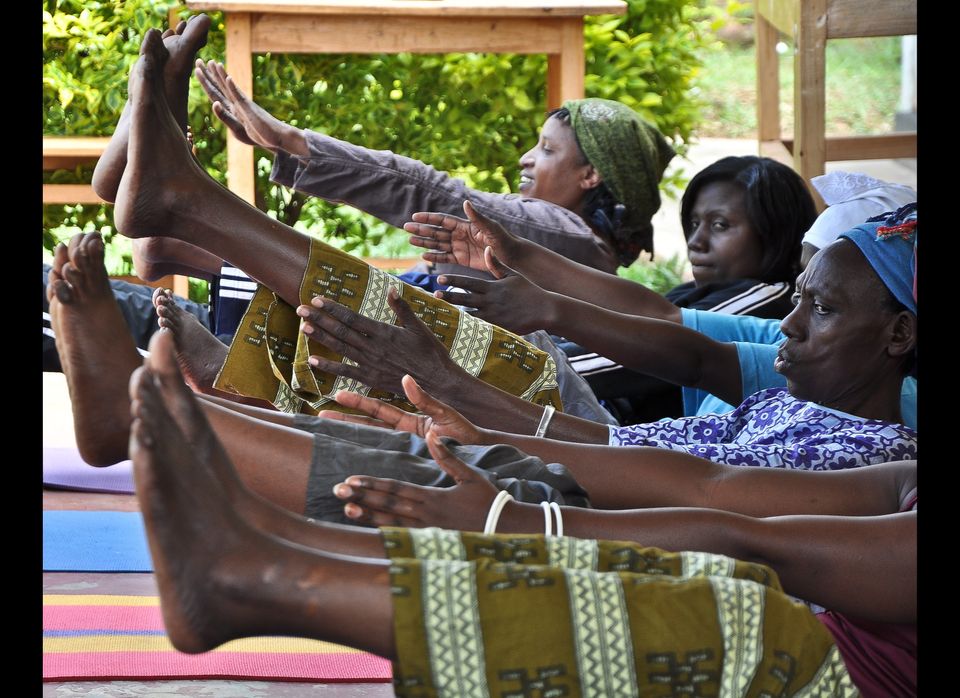