The truth is out there ... well, a large portion of the truth, anyway.

Approximately 130,000 pages of files from an official 22-year Air Force UFO study, known as Project Blue Book, are finally available to the public for free online.

Project Blue Book began in 1947 under the name Project Sign. It evolved into Project Grudge, and then finally took the name Blue Book in 1952. After 22 years of official investigations of thousands of UFO reports, the project was terminated in 1969.

The final conclusions of Project Blue Book were:

1) No UFO reported, investigated and evaluated by the Air Force has ever given any indication of threat to our national security

3) There has been no evidence indicating that sightings categorized as "unidentified" are extraterrestrial vehicles.

Retired Air Force Col. Robert Friend was the director of Project Blue Book from 1958 to 1963. Despite the fact that Blue Book was terminated in 1969, Friend told The Huffington Post in 2012 that he thought the UFO issue should have been turned over to scientists, who could best determine what was behind the more unusual reports.

"When I first took over the program, I wrote two staff studies, and in both instances, I recommended that [UFOs] be put into another agency which would give them full scientific investigations and analyses," Friend said.

"I think that anytime there's a possibility of scientific pay dirt from studying these phenomena that, yes, it would be much better if the government or some other agency was to take on these things and to pursue the scientific aspects of it," he added.

For many years, the declassified Project Blue Book documents resided on microfilm at the National Archives in Washington, D.C. (pictured below). If a person wanted to research those documents, it was necessary to travel to Washington, sit at a bulky microfilm projector and scan through many individual rolls of film to find what he or she was looking for -- a task this reporter performed many times during the 1970s and '80s. 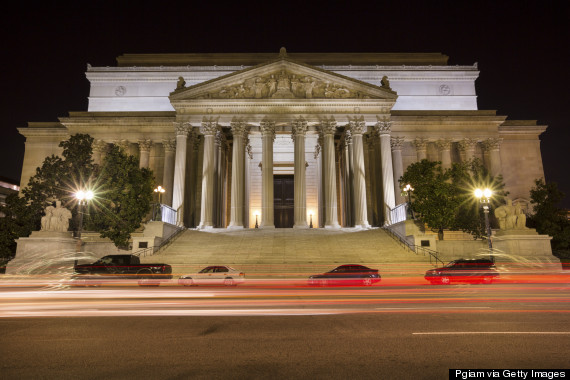 Now, thanks to the efforts of individual researchers, anyone can peruse the huge volume of Project Blue Book files on his or her personal computer, and at no charge.

A person who goes by the nickname "Xtraeme" compiled the original 130,000 Blue Book files into JPEG images. Television producer and writer John Greenewald followed up on Xtraeme's results and converted the files from JPEG pages into searchable PDF files.

"After quite a while, I figured out a computer script that would actually convert 130,000 essentially pictures into a little over 10,000 PDFs," Greenewald told HuffPost. "It took two to three weeks of nonstop computer processing time. I was then able to program the website and ultimately create a search engine that dives into those 10,000 PDFs."

The resulting Project Blue Book Collection lets anyone explore the thousands of original Air Force UFO files, and includes the option to search for things by year or by keyword.

Greenewald knows a thing or two about unearthing government and military files. Nearly 20 years ago, armed with Freedom of Information Act requests, he created The Black Vault, one of the world's largest compilations of government documents related to UFOs and conspiracies of all types. The Black Vault now consists of more than 1.4 million pages of information.

"The complete Blue Book files have never been available before with this much accessibility," Greenewald said. "The disclosure and declassification of Project Blue Book is not necessarily new, but the fact that there's a searchable database of it, where you can go in by decade and then see a listing of all the cities without having to go through any hassle of registering, or even paying -- that's the part that's new."

Watch this news report on the Project Blue Book Collection.

Greenewald, who's featured on the syndicated "Unsealed: Alien Files" series, cautions people not to assume or hope to find a paper trail in the Project Blue Book Collection that leads to declarations that UFOs are alien visitors.

"It's exciting that we can now go through and see the 22-year history of what the government and the military did to investigate the UFO phenomenon," he said. "If you're looking for a smoking gun, that's not necessarily going to be there in the sense that they're going to say aliens are here, they've been over our skies and here's an example. You're not going to find that."

One of the best-known and strongest UFO cases from the Blue Book files involved Lonnie Zamora, a reliable police officer who witnessed an unknown craft and two short beings in Socorro, New Mexico, on April 24, 1964.

While chasing a speeding car, Zamora heard a loud roar and saw a flame rising in the air. When he turned his attention to the commotion, thinking it had something to do with a nearby dynamite shack, he noticed a shiny object, which he first thought was an overturned car. Zamora quickly realized this was, in fact, an egg-shaped craft, with an odd, red-colored insignia and no doors or window. It was the size of an average car.

This is one of the sketches Zamora made for the original Blue Book files: 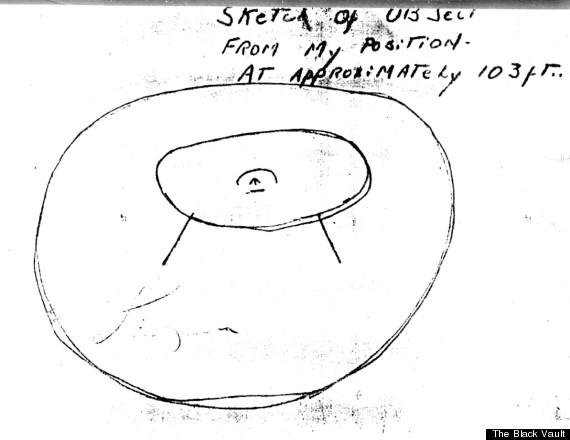 He then observed two beings, who appeared to be dressed in overalls and seemed startled by Zamora's presence. The police officer heard a loud sound, saw a blue-colored flame underneath the craft, and finally saw it take off in a straight line for several miles.

This is a re-enactment of what Lonnie Zamora reported to local and Air Force officials.

Adding credibility to this case were other eyewitnesses at different locations, who also reported seeing the unusual craft in the sky. Plus, investigators -- including Air Force personnel, the FBI and Project Blue Book's scientific consultant, astronomer J. Allen Hynek -- thought that Zamora had, in fact, observed something they couldn't easily explain.

The investigation also yielded evidence in the form of landing marks and footprints, as well as scorched brush around the area where Zamora said the object was sitting on the ground. In the end, both the object and the two beings that Zamora described were deemed "unidentified."

Here's the original Project Blue Book case card that indicates a conclusion of "unidentified" as well as "unknown": 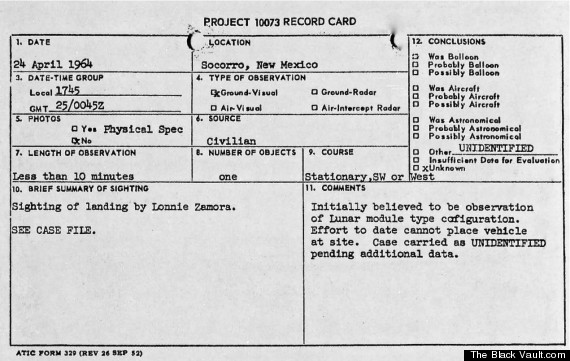 To check out the original Project Blue Book documents on the Zamora case, here are links for related photographs and for all the case files.

"What's interesting about this is you start going through the Blue Book documents and you realize just how serious the government and the military took these records," said Greenewald. "You might also start to question whether or not their label -- their definition and explanation -- of whatever these UFO cases were, you start to question whether or not they're right. They could say it's the planet Venus or swamp gas. Well, who's to say it was? Just because they say something is true, doesn't necessarily mean that it's actually true."

Project Blue Book ended in 1969, with the Air Force declaring there was nothing significant about UFOs that posed a threat to America's security or was worthy of any scientific investigation. And while those massive files were eventually declassified and are now easily accessible online, Greenewald suggested there's still more to the story of UFOs.

"When you use the Freedom of Information Act and see the documents that come from outside of the Blue Book system, past the 1969 closure of Blue Book, you look at those things and you realize there is a much bigger picture here -- UFOs are not explainable like they wanted to say. This is something very serious -- it's a big threat, and something that the government and military still take seriously, even to this day."

Echoing Greenewald's contention of an ongoing high-level interest in UFOs is former Air Force Col. Charles Halt, who has accused the U.S. government of a UFO coverup. Halt was one of numerous eyewitnesses to several UFO-related events in 1980 at dual military bases in the U.K. -- RAF Bentwaters and RAF Woodbridge -- in the Rendlesham Forest.

"I'm firmly convinced there's an agency and an effort to suppress," Halt told an audience in 2012 at the Smithsonian-affiliated National Atomic Testing Museum in Las Vegas.

"I've heard many people say that it's time for the government to appoint an agency to investigate. Folks, there is an agency, a very close-held, compartmentalized agency that's been investigating this for years, and there's a very active role played by many of our intelligence agencies that probably don't even know the details of what happens once they collect the data and forward it. It's kind of scary, isn't it?"