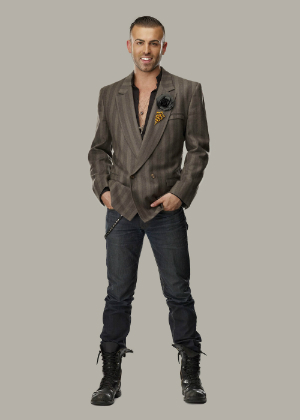 With a slicked-back nod to James Dean, an unapologetically sexualized aesthetic, and a searing ability to dispense opinion, designer Joshua McKinley thundered through this season of Project Runway both as a talent worthy of the final four and a take-it-or-leave-it depiction of gay men on TV. In the days leading up to the show's season finale (Thursday, Oct. 27 at 9 p.m. EDT on Lifetime), I chatted with the 25-year-old Ohio native about growing up as an athlete, his favorite pop divas, and why it's so hard to land a boyfriend in the city that never sleeps.

Phillip B. Crook: Being that you share the name McKinley with the high school in Glee, I'm wondering if you're a fan of that show.

Joshua McKinley: You know what, I don't watch much television... because I don't own one. McKinley is from President McKinley, who is one of my relations on my dad's side. It's actually my middle name. Cook is my last name, but I dropped it for professional reasons when I started my own line.

PC: Well, in the same way that Glee advocates for an LGBT presence on TV, you're now contributing to the image of gay men in media. Is that something you were conscious of going into Project Runway?

JM: I am who I am, and I'm comfortable with myself, so I'm glad that I can contribute in some way to something near to my heart. I hope that in some way putting myself out there has inspired other people. I've gotten messages on Facebook from people that came out to their parents after seeing me on the show. It's amazing that you can touch so many lives if you can inspire them to be confident and courageous.

PC: Who inspired you in pop culture when you were growing up?

JM: I was a huge Britney-Whitney-Christina fan. I'd be in my room lip-syncing and dancing. Those women made me comfortable in my own skin.

PC: What was it like growing up in Willoughby, Ohio?

JM: I did my best to fit in. As a kid I was really creative and involved in the arts -- a lot of community theater productions. But I was also such an athlete, as well. I played baseball and soccer and track. I was doing one activity to make other people happy and one activity to make myself happy.

PC: What do you think sports and fashion have in common?

JM: Running for so long really helped me to learn about the movements of the body and find things that are both comfortable and fashionable. If you look at a lot of what I do, it's athletic-based. I love bright colors; uniforms are really an inspiration.

PC: Speaking of uniforms, you've mentioned a few times on the show that your brother is in the military, so what conversations have you had over the past year as DADT has unraveled?

JM: It's been really quite amazing. Those conversations have reconnected a bond that we'd lost following high school. We didn't keep in touch much, so it was great to have him call me and hear the excitement in his voice over watching me on TV every week. He actually gets fired up about some of the incidences -- and that he's investing in what I love to do means so much to me. Being on Project Runway has helped me clarify that he loves me and has an understanding of who I am.

PC: One thing that was particularly interesting to watch this season was the dynamic between you and Burt -- because it was like two generations of gay men with so much in common yet who butt heads.

JM: It's extremely interesting now that the show is over because Burt and I talk weekly. I truly respect and love him for who he is. We were all thrown into this space where there's one piece of meat for all the lions, so I think in the beginning it was rough because we were all just trying to get through another challenge the best we could. Burt was a little difficult to understand in the beginning because he was fighting his own battles. He was the farthest from us in age, but what he realized was that he's talented and has something to give. Then he was more approachable and understandable. We connected on a lot of things, in terms of losing people and dealing with our sexualities. I definitely came to get who he is.

PC: We as an audience learned a lot about Burt's history from the first episode on, but how much was he sharing with the cast?

JM: It wasn't until after I moved into the other apartment after I lost all my roommates that I found out Burt was a recovering alcoholic. We shared the same room, and we would have conversations at night, but this was halfway through the season. Until then, I didn't know about that aspect of his life.

PC: People have reacted strongly to your conflict with a fellow designer, Becky, some calling it bullying. How do you react to that?

JM: It's really difficult to hear more than anything, because I know what it's like to be bullied. I lived a life of being called names and being pushed around. It's hurtful. I don't want that to be something people define me as.

PC: How do you want to be defined?

JM: It took bullies for me to learn that I'm OK, that I'm not this freak you want to make me out to be. So my definition of bullying is different than what people are defining it as in the scenario with Becky. I want to lift people up, not bring them down. I have strong opinions, and I'm a very competitive person, and it was just a really frustrating challenge.

PC: On the first episode of the finale, Nina Garcia called you a "very good designer." What did you think when you heard that?

JM: I was humbled because throughout the whole experience, she was really the one I was hoping to impress. I think I gave her critiques a little more clout. I tried to listen to what she was saying, and I want to say "thank you" to her, because she really helped me to learn and grow during each challenge. Even if she had something negative to say, she put it in a way that helped you feel confident.

PC: Do you think it's just a coincidence that all of the final four designers had major family losses, or does that say something about the group?

JM: I think it says something about us. What was really cool to figure out about all of those people was that we're all New Yorkers, in a way. This is a tough city. You have to be on top of your game to live here. I love that we all have that competitiveness in us. And the losses connect the four of us on an even deeper level. I think it's helped us push ourselves.

PC: How has notoriety changed the way you experience living in New York?

JM: Well, my bank account sure hasn't changed! One of the funniest times I get approached by people is when I'm on a busy, busy subway. People are like, "Good luck!" or "Congratulations!" It's exciting to have other New Yorkers take the time to come up and say something.

PC: Has it helped or hurt your dating life?

JM: I don't date much, but this show has definitely put me out there for people to approach. I'm mostly focused on making this career happen right now. A relationship takes a lot, a lot of work, so I wouldn't want anyone to think I wasn't giving them the attention they deserve. You know, it's hard to date guys in New York.

JM: Give me your definition of flaky, because someone called me that recently.

PC: I think the problem with guys in New York is that they're always dating with one eye open.

JM: It's true. If you're kissing someone, you're like, "Excuse me, why aren't both eyes closed?" It's like they're always looking for the next best thing when in actuality the best thing is standing right in front of them. I think it's difficult because we as gay men have high expectations of ourselves that we sometimes hold other people to when we meet.

PC: You said on the show that you mostly design for gay men. How has that influenced your aesthetic?

JM: It stemmed from working in a gay bar for so long. I realized that everyone, even in the dead of winter, was wearing a tank top underneath their clothes. I and I think we just love to show off that part of ourselves. It helps me be more free with my choices, which in the end sometimes means I have editing problems, but we're workin' out the kinks. I just love gay men so much [laughs] that I want to beautify each and every one of us in my clothing.

PC: If you had to design one tank top to express everything you are, what would it look like?

JM: It'd be a nice jersey with a mesh back, a little bit of crystal in the front, some stripes, and maybe a logo.