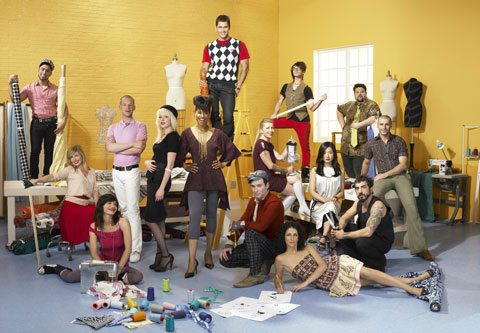 As an actress, I do not support reality television. That's my official stance. But as a woman who loves fashion and gay men almost as much as she loves her Lhasa Apso, I have a deep and meaningful bond with Project Runway.

Project Runway is that rare gem of a reality show that combines competition, true skill, heart, creativity and gays.

As if that's not enough, there's Tim Gunn. Tim is gaining a lot of ground on Carson Kressly from Queer Eye for the role of my new famous gay boyfriend. I adore Carson so much I used to have a recurring dream where we would go to Bali and boy watch while sipping coconutty drinks and trading witty quips. I did get to meet him once and upon sharing my dream with him he replied," Oh my God! That's so weird because I have a recurring dream you're my stalker!" Carson, call me!

But I digress. I am a huge Project Runway fan. So much so that last year I got into a heated debate while in line at Pinks right after Project Runway's Episode 7, 'The Everyday Woman'. That's the one where the designers had to create an outfit for each other's fat mothers or sisters instead of the anorexic clothes hangers they're used to dressing. While waiting for my Spicy Polish, I over heard a woman talking about how Season 3 winner, Jeffery Sebilia (my personal Season 3 fave who I totally predicted to win from the first episode, by the way...) "made Angela's mother cry". I couldn't help myself. I had to 'school' this naïve person that Angela and her mother were totally playing martyrs. Because Jeffrey had been an addict and recovered with the help of a 12 Step Program, he's not going to fall for any of that manipulative bullshit. He's a straight shooter, very sensitive and doesn't have time for people who play victims. I always thought Angela's clothes looked like wardrobe for "Riding the Bus with My Sister " starring Rosie O'Donnell as a mildly retarded woman . All that patchwork and rosette crap was enough to make even the WASP-iest WASP toss her crust less cucumber sandwich. I wanted Heidi to give her the 'Aufvederzane' from the get go! But this is TV after all and conflict is drama, so Angela stuck around like the evil Wendy Pepper from Season One!

So who are our new characters? Who's going to be our bad boy? Who'll be our next diva, our new sweet heart? Who will we love to hate? Now that Tim Gunn is Chief Creative officer for Liz Claiborne, Inc. will he still deliver those three words "Make it work!" with the same support, humility and urbane charm we've grown to cherish?

Armed with my press preview copy of the first episode I called my gay neighbor Rico to come over and bring the pink champagne! The game is we have to down a glass every time the word "fabulous" is said. He should bring over two bottles. Better make it three.

Now I'm not going to give anything away that you can't find online, but let me start by saying that this season has some of the best looking designers the show has ever seen. The cast is TV ready, coifed within an inch of their lives and just too darn pretty. The ages of the designers range from 21 to 44 this season, and a lot have already designed for celebrities the likes of Jessica Alba to Madonna. The collective resume of these designers is quite impressive and novices are at a premium this season.

Season 4 hasn't even premiered yet and already the gossip mills are rolling. If you've read any of the blogs or seen the Bravo promos, (which will soon be hitting us harder than Ike hit Tina after a bad gig) you already know that one of the contestants is out with his HIV positive status. His name is Jack Mackenroth and there is a nasty spoiler rumor going around on the web that he was kicked off the show due to a bad staff infection that rendered him unable to compete. Who knows if that's the truth or just Internet fodder? We'll soon find out! Goodie! Nothing says drama like an infectious disease.

"If that's true", says Rico, "that sucks, because Jack is one hot hottie and for the first episode he sets the bar high...the gay bar, that is!"

Kids, this season has gays galore!

THE BITCH IS BACK

This may be a tie. My vote is totally for Jillian Lewis. I think she's going to use her powers for e-vil. She's young, talented and appears very pulled together. I think she's a ticking time bomb waiting to blow! She seems like that girl in junior high who was your friend until you lost some weight, bought Guess jeans, had your braces removed and got a perm. Then she'd start a nasty rumor you had a private party with the entire football team under the bleachers. Not that I can relate to that kind of a thing. Rico votes for Victorya Hong. She reminds me of Chloe Dao, winner of season 2, and no it's not just because she's Asian. Firstly, Victorya is Korean and Chloe is Vietnamese. So there! It's because both of their mothers were major influences on them and both have successful labels and both... oh wait, maybe it is because they're Asian. Rico thinks Victorya is going to be a feral competitor and not take any crap from anyone. Maybe all that sweetness is less real than Pinkberry's yogurt? Maybe Pinkberry's yogurt is truly yogurt. No one knows for sure.

This was easy. Both Rico and I agree on Elisa Jimenez taking the title for biggest crazy. She's a true bohemian artist with more impressive credits and big names attached to her than I can shake a stick at. She also seems like she's a genuinely happy, spiritual person and is quite beautiful but she works with...marionettes. Well, that's enough for me to call her the captain of the crazy train!

Rico swears he shroomed with her at Burning Man. I say she gets the 'auf' from Heidi before she can get her puppets detangled from her suitcase.

I 'm not sure if it's because Chris March reminds me of my fabulous gays from the NY theatre scene or his designs are kitsch personified, but I adore him! I mean he designed for the famous drag queen, Miss Bunny for crying out loud! He will definitely bring some theatricality, panache and a sense of whimsy to the cast. His laugh is infectious and I just want to go out with him for a Lemon Drop Martini and sing the entire score from Company! Rico thinks he reminds me of Jay McCarroll because he's a fat, white, over the top gay man with a keen sense of color. Ok, that too. Talk about type casting! We both think Chris is going to have to make sure he doesn't overwhelm the judges with too much fabulousity all at once. I think he's going to make it to the final three just as sure as the favorite sport among the contestants is 'antiquing'.

Man, is anyone straight?

Christian is only 21 and the baby of Season 4. He's incredibly talented and has tude for days. Rico seems to think he has what it takes to make it to the final three. My guess is Rico just wants to take him to Fubar in WEHO for Fat Dick night.

Hands down I am going with the Israeli wunderkind turned Los Angeles resident, Rami Kashou. He's dressed everyone you can refer to by only their first name and still know who they are: Lindsay, Fergie and Paris are a few off this very impressive list. His designs are feminine without being overly girly and his taste, from the bit I've seen is impeccable. He's also a total fox. I actually got to e-mail him some questions. I was wondering why an already very successful designer with his clothes hanging in exclusive boutiques across the country would hope to get out of winning Project Runway? He said," Business growth. As a self financed designer who can always use more tools to promote a brand. I decided to do the show and benefit from the powerful media of television. It will certainly help in the growth of my company and potentially attract investors." All that talent and he's smart too. He also told me that when he was in New York he missed Echo Park! He's so cute. Rico thinks he can actually get a date with him.

THE REST OF THE CREW

I say to keep an eye on Carmen, she's a fierce New Yorker and I bet she'll prove to be a top competitor. Rico says to look out for Steve and Marion who just may turn out to be the stealth bombers of design for Season 4. We both agree that Kit may prove to put up a fight with her punk-ish Betsy Johnson like chick threads. I think Sweet P is a hot rocker mama sporting an inner Jeffrey Sabilia ( the two are friends from L.A.!). She's clearly as 'sweet' as her alias and wins my prediction for 'fan favorite'. Kevin and Ricky left no impression on my aesthetic thus far, and Simone's designs left Rico sleepy. Or maybe it was the three bottles of pink champagne? There is a whole lot of 'fabulous' in Season 4!