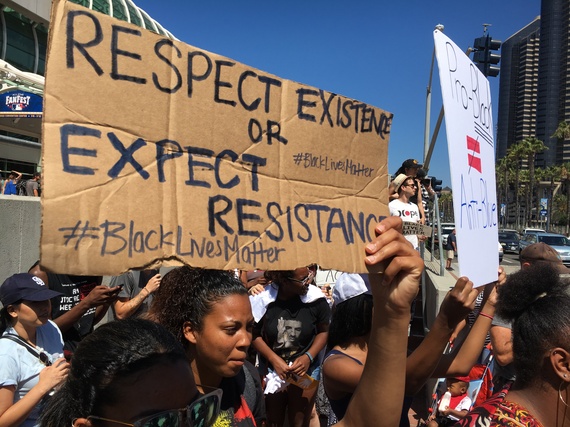 Inside the ballpark, a group of Canadian tenors sang their country's national anthem in honor of Canada's contingent of big league teams and players. But one rogue tenor stunned the crowd and viewers at home by holding up a small sheet of paper with writing that read, "all lives matter" at the same time he modified lyrics of the Canadian national anthem to include the same phrase.

"All lives matter" is seen by many as a pugnacious campaign to dismiss assertions that, while black lives should matter as much as the lives of people who are not black in the context of interactions with law enforcement, some police officers don't value black lives at all.

Outside the stadium at the start of the big game, about 50 demonstrators gathered to protest two separate killings by white police officers of two black men. Both killings were captured on video and spread via social media and cable news out to a horrified nation. So troubling are the video-recorded circumstances of the killings of Alton Sterling in Baton Rouge, La. and Philando Castile in Falcon Heights, Minn. that state and local officials in both places immediately called in federal authorities to investigate.

The frustration and horror of Sterling's and Castile's deaths-by-police-bullets a thousand miles from each other, but less than a day apart were followed by more horror when, in Dallas, a lone sniper killed five police officers at the tail-end of a protest march.

Four of the officers in Dallas were white, one Hispanic. The gunman was black. Barack Obama, America's first black president, rushed home from Europe where he was tending to strategic foreign alliances, even as a former congressman appeared to threaten the start of a vast American race war.

In Dallas, a city whose police department had paradoxically been held up as an example of the kind of reforms other cities should implement to ameliorate racial tensions, President Obama sought to unite and heal a head-spun nation grappling with its age-old crucible: race relations.

Meanwhile in San Diego, a new Black Lives Matter chapter is seeking to rise up from the ashes of a predecessor group, which was dissolved as a result of internal bickering about whether or not LGBT people are sinners to be tolerated inside the movement, or to be cast aside altogether. For organizers of Black Lives Matter-San Diego, version 2.0, the All Star Game with its international audience watching was a cue to come out loud, strong and pro-LGBT. 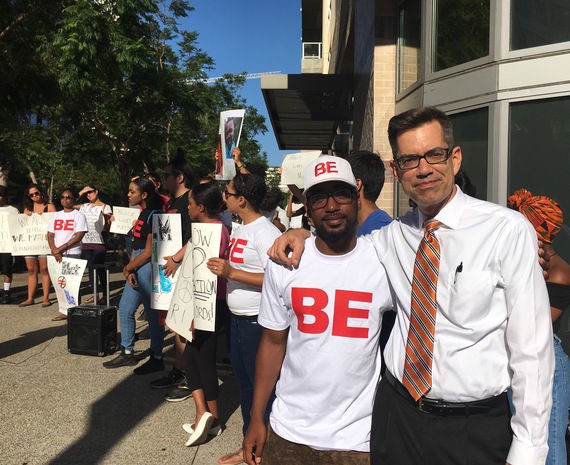 "The primary point was to bring focus to the Black Lives Matter movement nationally, who earlier in the day had released their 10-point manifesto; and secondly, to show our face at a high-profile event so that we could bring attention to the San Diego chapter as an example of collaborating with police to stage a peaceful protest while also being sure our message is still being heard," said protest organizer, Cassie Perando, 29, of San Diego.

While organizers of the demonstration came together under the Black Lives Matter banner, they did so without sanctioning from the national Black Lives Matter organization, such as it is. The now-defunct San Diego chapter was recently declared dissolved by its original founder, Mahnani Clay, because the group had allegedly become highjacked by leaders who were hostile to gender and sexual minorities, i.e. LGBT activists, among it ranks.

Homophobic Messages Marred Defunct BLM San Diego Chapter
"I think that there's really a major divide in the black community overall," said Mahnani Clay, cofounder of the now-suspended original Black Lives Matter San Diego Chapter during a recent phone interview. "And there's pretty rampant homophobia among a lot of our elders. They grew up in a certain time and they have a certain way of thinking."

Clay says some ultra-conservative Christians within the African-American community and even in some corners of Black Lives Matter harbor strong anti-equality feelings toward their lesbian, gay, bisexual and transgender brethren.

Homophobia and transphobia inside any Black Lives Matter local chapter is beyond ironic, according to Cat Mendonca (31) of San Diego. She points out that the movement itself was founded by three people who identify as queer women of color.

"There's a lack of understanding that the Black Lives Matter movement, which they say they believe in and claim to serve, is and always was a queer-inclusive, queer-affirming movement," says Mendonca, referring to a small but forceful group of leaders of the old BLM-SD chapter. "It was really disappointing and distracting."

Social media messages obtained by San Diego LGBT Weekly purportedly shared among leaders of the old, now-dissolved local Black Lives Matter San Diego chapter reveal that the group may indeed have been tainted by homophobia and transphobic sentiments from at least one leader. 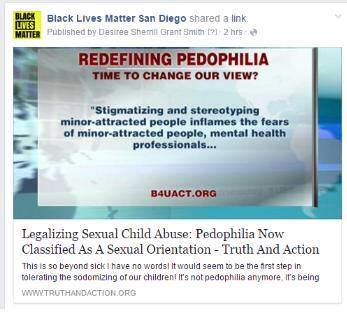 "The movement is supposed to be a safe space for all people regardless of their race, ethnicity, sexual orientation or gender," says Mendonca. She is not formally associated with the new chapter, which is seeking official recognition from the national organization. However, according to one of the new group's leaders, they'd like to welcome her. 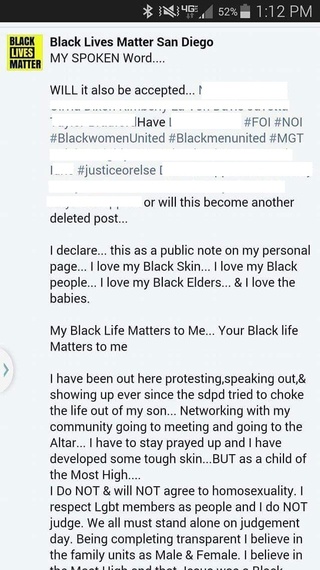 "We're working on building a relationship," says Perando, referring to Mendonca. "She has that deep experience we need, and I'm hopeful she'll join our chapter."

In addition to having been early to the Black Lives Matter movement locally, Mendonca, who identifies as a queer woman of color, is also founder of United Against Police Terror San Diego (UAPTSD). She says she came to anti-brutality activism after having been the victim of a sexual assault at the hands of a police officer in Los Angeles.

"That experience changed my life forever," she tells LGBT Weekly. "The way to end victimization by the state and by police is to take action and to give voice to victims."

According to UAPTSD, there have been 593 deaths caused by police in San Diego County in the past three-and-a-half decades. Mendonca and many in the Black Lives Matter movement are dubious about police descriptions of the circumstances surrounding officer-involved shootings and other types of suspect-deaths.

Case in point, the July 8 shooting of Jose Armando Garcia (47) of Fallbrook. Mendonca points to the fact that the sheriff's report acknowledges that Garcia was likely suicidal. Activists like Mendonca protest against what they see as a de facto position among law enforcement officials that gunning down mental health patients is a legitimate way to deal with suicidal behavior.

"How is filling someone with bullets acceptable as a way of dealing with a mental health issue?" Mendonca asks.

She, like many in the local civil liberties community, was particularly troubled by the fact that District Attorney Bonnie Dumanis vowed to keep secret police body camera footage of the police shooting-death -- as many as 40 shots may have been fired -- of Thongsoune Vilaysanesays in May of this year.

"In fall of last year, three black men were murdered [by law enforcement officers] in San Diego in one month," says Mendonca, referring to the October, 2015 killings of Lamontez Jones (39), Anthony Ashford (29) and Rayshaun Cole (30). To be clear, none of those deaths have officially been deemed murders.

Mendonca was not at the All Star Game protest, but organized another demonstration the following Friday under the auspices of a project called Overpass Light Brigade. As the name implies, OLB uses southern California's ubiquitous and high-traffic freeways -- or, more accurately overpasses above them -- as communication platforms aimed squarely at the region's commuters and at ending what activists call police brutality.

(A previous version of this article appeared at LGBTweekly.com)