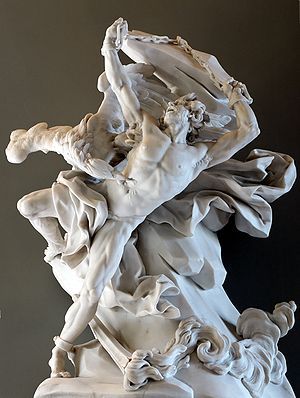 Prometheus depicted in a sculpture by Nicolas-Sébastien Adam, 1762 (Louvre)

The front page of the NY Times is this morning dominated by a map of the US, mostly in red, bearing the headline "US CLIMATE HAS ALREADY CHANGED". Clearly, Global Warming is already here, even if vast numbers of Americans still want to debate the point.

When it comes to scientific reality, debates make little difference. And, if you are to believe James Lovelock, creator (and author) of The Gaia Theory, there is little that we can do about global warming anyway. Lovelock believes that it is already far too late, and that things like carbon offset taxes are useless, as is changing lightbulbs. "Like rearranging the deck chairs on the Titanic"

"Lovelock believes global warming is now irreversible, and that nothing can prevent large parts of the planet becoming too hot to inhabit, or sinking underwater, resulting in mass migration, famine and epidemics."

When asked what we should do, Lovelock, who is one of the most respected scientists in the UK responded,

"Enjoy life while you can. Because if you're lucky it's going to be 20 years before it hits the fan."

If he is right (and he might very well be), then all this argument and debate and planning is, essentially worthless.

But if it is, the root causes of it are deep in our DNA.

Since man first crawled out of caves (or even then), we have burned things.

It is in our nature.

Our ability to make fire was what separated us from the other animals.

In Greek mythology, Prometheus steals fire from the Gods and gives it to mankind, his creation. For this, Prometheus is punished forever by the Gods, but mankind, according to the Greeks, begins their ascent to civilization.

It was fire, after all, that allowed us to heat our homes, cook our food, smelt our metals and build our world. We are burners of things. We always have been. It is deep in our DNA.

Burning things is core to our lives. It has been forever.

Yet it is that very act of burning things that releases all the carbon into the atmosphere. It is that burning of things that is killing us and our planet.

Can we stop burning things?

The evolutionary biologist Stephen Jay Gould wrote that perhaps it would be shown that intelligence is not the best trait for survival of a species.

Perhaps, in the end, the Gift of Prometheus was not so great a gift at all.