On Monday, Aug. 4, the California Senate Committee on Appropriations heard final testimonies from proponents and opponents of A.B. 1576. They will go into a vote on the bill by Aug. 15.

The bill intends to add section 6401.9 to the California Labor Code to protect employees of the adult film industry from exposure to, and infection by, sexually transmitted infections.

The letter pointed out that A.B. 1576 not only would infringe on privacy and individual rights to decline testing by expanding state-mandated HIV testing, assault long-standing workplace protections, and fail to comply with protections included in federal and California legislation (ADA and FEHA) but is inconsistent with already existing health and safety regulations.

The Center for HIV Law and Policy, the HIV Prevention Justice Alliance and the Positive Women's Network-USA have also submitted letters of opposition.

Assembly member Isadore Hall first introduced A.B. 1576 in January 2014. This bill follows his earlier attempts with A.B. 640, which died in appropriations, and A.B. 332, which was declared unconstitutional.

The adult film industry (AFI) and many advocacy groups like ADAP (Adult Performer Advocacy Committee) and the Free Speech Coalition (FSC) oppose the bill. Over 650 performers signed a petition, and many of them spoke against the bill in hearings. It is considered to be a statewide version of L.A. County's Safer Sex in the Adult Film Industry Act, also known as L.A. County's Measure B, which was approved with 56.96 percent of the vote in 2012.

The L.A.-based AIDS Healthcare Foundation (AHF) and its president, Michael Weinstein, are probably the most prominent supporters of the bill, despite their historic opposition to mandatory testing spanning from 1986 to 2004.

In 2004 both the AHF and the Free Speech Coalition jointly opposed A.B. 2798. The bill aimed to mandate a similar public revelation of adult film performers' STI test details and HIV status, like A.B. 1576 is set out for. The AHF opposed this in 2004 as follows:

The AIDS Healthcare Foundation is opposed to any provision of law that seeks to make HIV testing mandatory and particularly concerned that this bill does not recognize reality of HIV testing. The American Civil Liberties Union opposes mandatory testing of individuals for HIV status based on its infringement of individual liberty and right to privacy....

In 1986 Weinstein opposed Proposition 64, which also asked for mandatory HIV testing. The same initiative failed again in 1988 as Proposition 69.

The reasons for AHF's support of A.B. 1576 are listed on fair4ca.org. The site is registered to Richard L. Conard, Director of Marketing Technology at AHF, and quotes Isadore Hall's A.B. 332 statement that "[t]he result of this unsafe work environment is a public health crisis...."

Instead of identifying the severity of this "crisis" by comparing how many performers there are with how many are affected, the primary focus is the claim that "23 performers employed by the AFI tested positive for HIV" between 2004 and 2010. However, while A.B. 1576 is only concerned with occupational on-set transmissions, it is not explained where these infections occurred.

Due to the existing health and safety practices in the adult film industry, we know that from 2005 to 2014, no HIV transmissions occurred on-set. During this decade about 450,000 new HIV infections were recorded in the U.S.

The last proven on-set transmissions occurred in 2004, when a male performer transmitted HIV to three female performers after he was infected in Brazil. Back then the incident triggered the aforementioned A.B. 2897, against AHF opposition, as well as an investigation and the launch of a website dedicated to the adult film industry. On this page the California Division of Occupational Health (DOSH) interpreted how Section 5193 applied to adult film performers.

Another claim to support the crisis suggestion is that condoms aren't used in 97 percent of all adult films. Based on this, calculated HIV exposure risks of unprotected sex, and the estimate of 4,000 to 11,000 annual adult film productions, an average of 208 to 571 on-set HIV infections could be expected (see graph below) over the 10 years between 2005 and 2014. The truth is that zero on-set transmissions were recorded.

Workers in this industry need to ... be able to participate in decision-making about their health and safety at work, and to benefit from prevention practices.

The below chart visualizes what effect different choices can have. It shows the possible number of on-set HIV transmissions according to calculated HIV exposure risks, different prevention scenarios* and the estimated number of annual AFI productions. 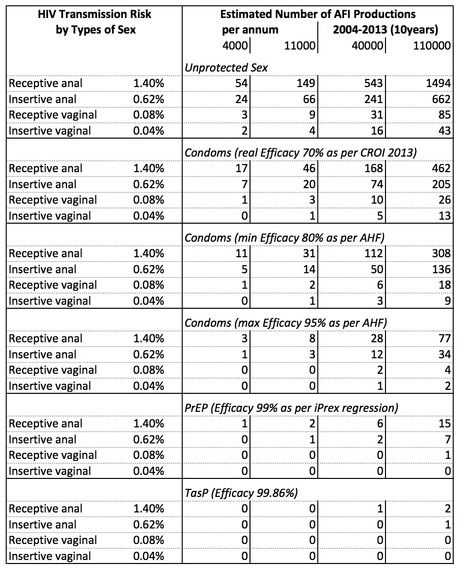 Forcing adult film performers to give up personal control over their health not only is unjust but seems to prove the public suspicion that the AHF is merely trying to cover up an "anti-porn crusade." On July 25 the AHF AHF filed a complained against San Francisco-based Kink.com. The complaint that PPEs couldn't be seen in the final version of the film regarded an oral-intercourse-only production in Nevada with tested performers and stimulating "equipment" used with condoms. Even in California's DOSH interpretation, PPEs do not have to be visible in the final content.

According to LA Weekly the AHF even claimed on Twitter:

The referred-to NV Rev. Stat. § 244.345 specifically addresses "[d]ancing halls, escort services, entertainment by referral services and gambling games or devices; limitation on licensing of houses of prostitution." It was already discussed in an article by the Las Vegas Sun in 2013 that productions may move to Vegas legally.

Hence the biggest obstacle of a feasible and effective bill to protect and enhance the health of adult film performers might be A.B. 1576's strongest supporter. Weinstein's widely opposed "anti-scientific approach" and the AHF's mantra that "[a]ccess to and the use of condoms is the most effective way to prevent sexually transmitted infections (STIs) and HIV" are questionable.

After all, the prevention toolkit consists of many effective prevention methods, including those that have been developed since DOSH's last update in 2004. PrEP and TasP, for example, are, as shown in the chart above, the most effective HIV prevention methods and should be considered too. While PrEP and TasP don't prevent other STIs, condomless oral sex doesn't either. Yet HIV transmission is ultimately the biggest concern.

Instead of requiring outdated PPEs and costs to be paid by the employer, a timely bill would make use of the Affordable Care Act. Requiring health insurance for employees would guarantee easy access to all prevention methods as well as regular testing, efficient treatment and vaccinations. The feasibility is easily understood. The UK's universal health care made it possible that 61 percent of all people living with HIV have suppressed viral loads that are considered undetectable, with less than 50 viral copies per milliliter of blood plasma. In the U.S. only 25 percent of all people living with HIV are considered virally suppressed, with 200 viral copies per milliliter.

Let's be honest: The intentions of A.B. 1576 are, at best, unclear. While mandatory testing threatens privacy and individual rights of performers, it is doubtful that enforcing outdated prevention efforts onto performers and productions will do any good for anyone.

The Senate Appropriations Committee must now decide whether to #StopAB1576 or increase HIV discrimination and force an industry with about 10,000 jobs and approximately $6 billion out of California.

CORRECTION: An earlier version of this blog post erroneously used the word "million" in place of "milliliter" in the context of viral load measurements. It has been updated accordingly.