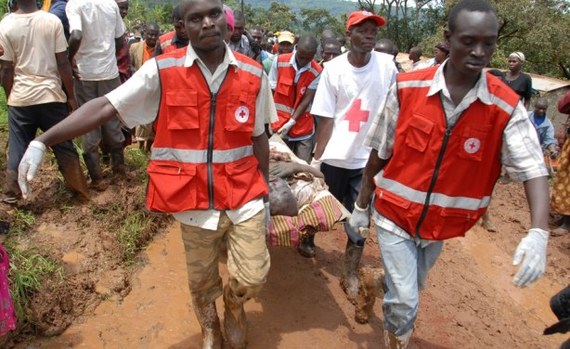 Co-authored with Mr Mohamed Guleid and Mr Mukhtar A. Ogle

For the community of Mandera, a remote Northern frontier town in Kenya, long resigned to years of what they felt was neglect, the pomp associated with hosting Ambassadors for the first time was reason enough for evident optimism about the future.

The Ambassadors of Turkey, Sweden, the European Union, Denmark and Finland to Kenya and the Executive Director of UNFPA were in Mandera in November 2015 to launch a Community Life Center and join the First Lady of Kenya for the Beyond Zero campaign.

The Community Life Center, a partnership between the United Nations Population Fund (UNFPA) and Philips would bring quality primary healthcare within reach of about 25,000 women and children. The counties in northern Kenya are responsible for half of the country's maternal mortality burden.

The enthusiastic reception for the dignitaries was not just because they were first-time visitors, but because residents saw the visit as a harbinger of better fortunes for the region, long regarded as a forgotten frontier.

The focus on getting the health status of the region to match the rest of the country has incubated discourse on what other collateral benefits provision of health services can have, including neutering the drivers of violent extremism.

The concept of "health as a bridge for peace" may be resonating in this county, which has seen the scourge of internecine conflicts and cross border attacks.

In her paper 'Health as Bridge for Peace' presented in Paris in 1997, Judith Large introduced the concept of health care as bridge for peace. In her typology of violence she coined the term structural violence. She argues that structural violence is not always synonymous with armed conflict.

"The nexus between effective health services and security is now becoming clearer. An adequate and equitable health care system gives an essential form of security and we are quite optimistic that this project is the beginning of a new narrative for communities here," says Mandera County Governor Ali Roba.

According to WHO, it works even better when all actors get involved in post-war reconstruction. What happens is that health workers, a key pillar in delivering health programmes in conflict and post-conflict situations, contribute to peace-building initiatives.

For example, opposite sides can collaborate to carry out immunization campaigns in the midst of wars and local conflicts helping to not only bridge the gap but trigger discussions like why fight? It also has the power to trigger empathy among the adversaries because seeing a sick, malnourished child suffering for a cause they know nothing about will certainly melt even the most battle-hardened of men.

Like the rest of the country, Kenya's Northern regions has the largest generation of young people it has ever known. While for long a growing youth demographic has been seen as a serious potential for disruption, the region presents a fertile source for recruitment into violent extremist groups.

Geographical remoteness, poverty and years of neglect present only a dead end for the region's youth, with whatever ambition they may start out with promptly turning into frustration, thus presenting bountiful space for violent groups to fuel their own agendas.

A Harvard Kennedy School study found that globally, it is young men who fight in wars or commit violent crimes and that a "youth bulge" made them more strife-prone. When 15 to 24-year-olds made up more than 35% of the adult population -- as is common in developing countries -- the risk of conflict was 150% higher compared to rich countries with an older age profile.

When Pope Francis visited Kenya in November last year, he reiterated that the youth, if given opportunities, could be at the forefront of change, innovation, and new world of possibilities by applying their knowledge and skills in technology to solve problems in health care, education and agriculture.

In Mandera and other northern counties, UNFPA is leading a Reproductive Maternal Newborn and Child Health (RMNCH) project, together with the World Bank, UNICEF, WHO and the Kenya Red Cross. A consortium of private sector firms, which seek to save the lives of mothers and young children have also joined.

The presence of private sector partners seeking to build sustainable businesses generates hope for employment opportunities for the youth.

"Empowering women and girls for their rights - to stay in school, to choose when to marry and when to give birth, to opportunities for gainful employment - are the most expedient means to get there" says Ms Ruth Kagia, a Senior Adviser to the President of Kenya.

With the right support, young people can make positive changes in their lives, inspire new opportunities and reduce retrogressive behavior by engaging in community activism especially for maternal and child health. But the success for such innovative engagement requires leadership that not only pollinates the mission of change but also leads from the front.

There is an opportunity to transform the region's 'youth bulge' into a 'youth boom'. In the words of United Nation Secretary General Mr Ban Ki-Moon, empowering the youth will ensure that they represent "promise, not peril".

Mohamed Guleid is the Deputy Governor of Isiolo County, Mukhtar A Ogle, Secretary Strategic Initiatives and Development in the Office of the President of Kenya and Siddharth Chatterjee is the UNFPA Representative to Kenya.