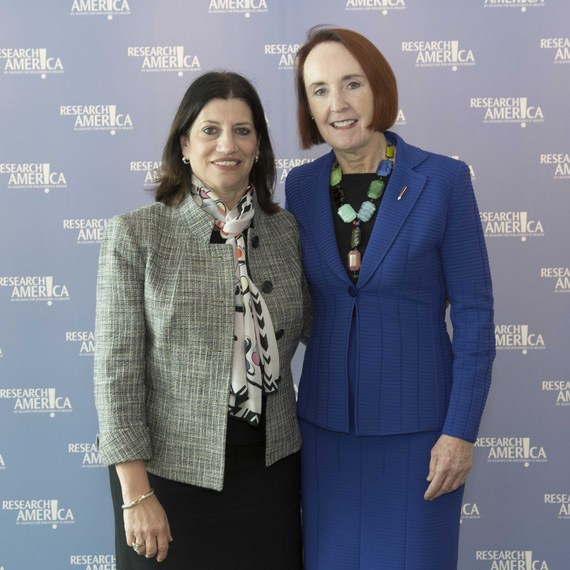 
February 23, 1954, was a milestone in the history of American medical research. That day, children at Arsenal Elementary School in Pittsburgh lined up to receive injections of a promising vaccine. Within months, schoolchildren all over the country were doing the same, and polio was on its way to being eradicated in the United States. The disease, which had killed and paralyzed children and adults alike, would no longer be a threat.

This remarkable achievement would not have been possible without the work of Dr. Jonas Salk and his team at the University of Pittsburgh, and -- equally significant -- grant support from the National Foundation for Infantile Paralysis, now known as March of Dimes. Policymakers played a role, too, when the Polio Vaccine Assistance Act of 1955 made possible federal grants to the states for purchase of the vaccine and for the costs of planning and conducting vaccination programs.

A generation or two later, millions of individuals worldwide benefited from another major medical breakthrough. Remember when being diagnosed as HIV-positive was an automatic death sentence in the 1980s? Accelerated research supported by the National Institutes of Health (NIH), in partnership with Burroughs Wellcome and Duke University, resulted in the development of AZT, the first drug that slowed the replication of HIV. By 1987, the drug won FDA approval and marked the first major treatment in extending the lives of HIV/AIDS patients.

Lifesaving wonders such as the Salk vaccine and AZT can't come quickly enough for patients suffering from debilitating and deadly diseases. That's why there is a coordinated push this month by medical research organizations for Congress to increase funding for federally supported research that lays the groundwork for private-sector innovation.

Efforts to combat Ebola, dengue fever, and other deadly diseases with a rapid, coordinated response would be hamstrung without well-funded federal agencies, as well as successful partnerships between the public and private sectors, worldwide. In addition, federal research agencies like the NIH and the National Science Foundation fuel scientific discovery at academic institutions, providing the resources that are critical to supporting small- and large-scale projects that could lead to promising new therapies and medical devices. Without such research, we would have not discovered the use of vitamin D and aspirin as preventative measures for dementia, heart attack and stroke. The critical boundary-pushing science being undertaken by federal government researchers and their academic and private-sector partners has been slowing over the last decade, as policymakers seemingly take progress for granted. We can't allow this to happen; there is too much at stake.

For example, scientists at UC Berkeley are working to grow human organ tissues, like heart and liver, on tiny chips. If successful, the project could lead to "a personalized-medicine, patient-specific readout of any drug you want to test," according to Anurag Mathur, one of the researchers at Berkeley. This bioengineering technique could one day replace years of tedious testing on humans and animals. This research is happening thanks to funding by the Cures Acceleration Network, which is overseen by the National Center for Advancing Translational Sciences (NCATS), an agency within NIH.

Furthermore, NIH, Novartis, and the Banner Alzheimer's Institute, a Phoenix-based non-profit, are testing drugs that could potentially prevent Alzheimer's in people with a genetic predisposition to that terrible disease. Another public/private partnership of NIH-funded researchers, scientists at the biotech company Genentech, and Belgian researchers resulted in the mass production of t-PA, a clot-dissolving enzyme that dramatically reduces mortality and disability when promptly delivered to victims of heart attack and stroke.

There are hundreds of vital research projects underway, many of them threatened by loss of support. For advances to continue, for patients' hope to be kept alive, the public, scientists, and advocates must urge Congress to boost funding for research and restore NIH's purchasing power, which is 25 percent lower than it was a decade ago. That's why are are now seeing an unprecedented level of collaboration on congressional outreach by organizations such as Research! America, Susan G. Komen, and the American Association for Cancer Research. As policymakers make funding decisions for the next fiscal year, it is imperative that Congress realize what is at risk.

Cancer in all its forms, Alzheimer's, ALS, multiple sclerosis, Parkinson's, and painful, chronic conditions such as rheumatoid arthritis and Crohn's disease will only be overcome if we, as a nation, have the will and commitment to once again make funding the type of essential research that led to the eradication of polio in the United States such a high national priority.

In sum, policymakers must support substantial investments in medical research and policies that advance public and private innovation. They must offer that support as if it were a matter of life and death -- because history shows us it is.