This article is part of TheToolbox.org's #WomenInFront series, powered by Humanise. Learn more about the initiative at WomenInFront.net, or join the conversation on social media: Twitter, Facebook and Instagram.

Social equality has the greatest chances at being achieved when all sectors at the corporate, government and grass roots level work together. That's a lot of ecosystems with different geopolitical agendas to fit under one Utopian umbrella. So what's the solution? Corporate social responsibility?

Some people say corporate social responsibility (CSR) is disingenuous and ineffective because it's not predicated on the principles of what constitutes a responsible business, and that it's simply whatever a company's leadership wants it to be based on their own incentives. Some argue that CRS is merely a way for corporations to cover their asses, avoid regulation, and deflect blame or problems caused by business practices that harm the environment or a group of people. Some say CSR is just crafty public relations.

Truth be told, there are times when CSR is all of this and more -- the operative word being more. The silver lining of CSR is that among the most forward thinking and creative businesses, social responsibility drives innovation. Just ask CSR and sustainability expert Susan McPherson.

As the founder of McPherson Strategies, Susan helps companies, nonprofits and foundations amplify their reach and social impact through creating social engagement movements, campaigns, events and strategic partnerships. In a Forbes post she wrote last year, Susan listed eight trends to watch for in 2015. "Diversifying the C-suite," a prevalent topic among gender equality advocates, was included in that roster.

While only 14.2 percent of the top leadership positions at S&P 500 companies are held by women, there is data proving that companies with more female board members outperform those with no female directors. In other words, what's good for women is good for business. This isn't a trend. It's a fact. The corporate world just needs to catch up with the way the world is moving, and it's moving by the ways of women.

A dedicated gender equality activist, Susan says the best way business can help the cause is to pay an equal wage, hire more women and promote more women to senior roles.

"Businesses can, and should, provide mentoring and training to make these positions attainable and do what they can to place more women on their boards," says Susan. "Special attention should be placed on supporting minority women as their barriers to equality are even steeper. Additionally, businesses should and must put a stop to any tolerance of sexual behavior towards women (and all persons) in the workplace."

Gender inequality in the workplace and beyond isn't a women's issue; it's a universal issue. While there are a number of male leaders supporting women's rights, the need for more inclusion is palpable. Susan says a lot this comes down to educating people.

"What men need to understand is that women's equality will lead to a better society, one with an increased GDP, one with higher incomes, one with a more educated population that offers more opportunity for all," shares Susan. "As more men in power positions come to understand this dynamic, we will see more speak out. Perhaps I'm overly optimistic, but it's part of my DNA." 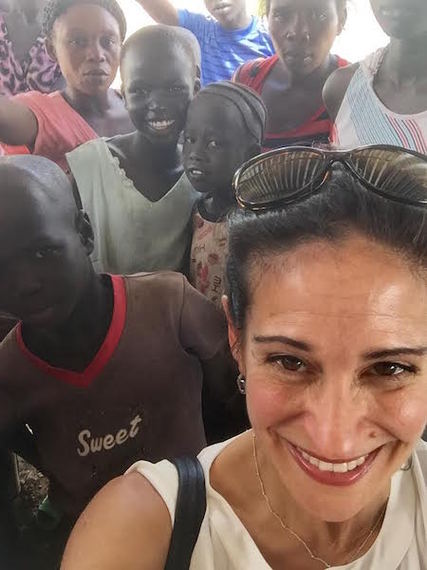 What's unique about Susan's work and activism is that it's boundless. One day she's advising major corporations on how they can be better corporate citizens, the next day she's visiting refugee camps in Kenya and Africa.

Outside of white office walls and fluorescent lights, business can be cultivated as a means of promoting peace. For several years, Susan was on the board of Bpeace, which mentors, supports and trains women entrepreneurs in regions of post-conflict. The goal is to help them scale their businesses and create jobs for their growing businesses.

Susan currently holds a board role with USA for UNHCR (UN Refugee Commission), which aims to protect women refugees and their children from the violence that is prevalent in warfare situations.

She says, "Women refugees face extreme burdens both within the existing camps and settlements along with those fleeing their countries for a better life."

Susan is also partnering with the UN Foundation to showcase and help provide visibility to the UN's new 17 Global Goals launched this past September. Goal number five, a driving principle of Humanise's and TheToolbox.org' s #WomenInFront initiative, is to work towards global gender equality.

How Far Do We Have To Go?

When asked what she'd like to see happen in her lifetime where gender equality is concerned, Susan revealed a few important stats and targeted goals.

Around the world 62 million girls are not in school. Globally, one in three women will experience gender-based violence in her lifetime. In developing countries, one in seven girls will be married before her 15th birthday, with some child brides being as young as eight or nine. Each year more than 287,000 women, (98 percent of them in developing countries), die from pregnancy and childbirth-related complications.

Gender injustice is rampant all over the world, but things are changing. Susan says in the US, she'd like to see equal representation in our state and national governments, as well as in Hollywood. Equal pay for equal work and voting in the first US woman president are also at the top of her list. Thanks to some change makers flipping the script in entertainment and politics, we're getting closer.