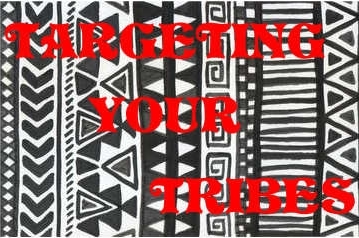 To badly paraphrase and twist an observation from W. Somerset Maugham - There are three rules for successful book promotion. Unfortunately, nobody knows what they are... Many of us have figured out what doesn't work as we search for an approach to successful literary promotion without being so obnoxious as to get people to block us or unsubscribe from our life.

Recently, I've been hearing a lot about tribes. It appears to be a new buzzword all the hipsters and cool kids are slipping into conversation so they can sound hip and cool. Back when National Geographic was relevant (before hip and cool), the term most often appeared under pictures of tall indigenous women with bare breasts surrounded by naked smiling children, who would all grow up to become marathon runners. However, if I remember correctly (and it really doesn't matter to my point if I remember correctly or not, so no nastygrams), it was the rough and nasty British soccer hooligans who first violently hijacked the term tribes as a self-identifying label.

This new label was meant to show how fearsome and uncivilized they were as they followed their chosen soccer team from venue to venue - or their national team from country to country - as long as beer was nearby. Tribes of soccer hooligans openly went to war with other tribes of soccer hooligans, who all turned on that other English tribe identified by their blue uniforms and silly hats. All of this would have been fine - survival of the fittest and all that - if they hadn't terrorized and beaten the average ticket buying punter, most of whom were from a large unnamed, unarmed, disorganized, clueless tribe of pudgy, pale, men who just wanted to watch a soccer game and cheer for their team - as long as beer was nearby (so, perhaps, not so different).

Today, however, the term tribes has been co-opted to apply to any like-minded group of individuals with specific interests or goals. I'm not sure if that makes intelligent, funny, slightly perverted people a tribe, but if it does, then I wear the same war paint.

With the idea of maximizing the publicity impact for my latest novel, LIE CATCHERS, I began to think about all of the tribes with which I am associated. There's a bunch of them, and they all had one thing in common - they didn't overlap.

If you were part of a tribe featured in National Geographic, there wasn't a lot of wiggle room. You were born into a tribe and it was the tribe you stayed in for life. There was no participating in the rituals of another tribe unless they were roasting you on a spit. Romeo and Juliet cross tribe romances could only lead to bad things - undoubtedly, Shakespeare agreed. Under the current usage of tribes, however, all of us belong to a number of different tribes - family, work, church, etc. The common denominator being your participation in the traditions, practices, and interests of each tribe.

When I started adding them up, I could see I was a card carrying member of more tribes than I had first imagined - cops (unquestionably a tribe), mystery writers and pulp writers (and never the twain will meet), church affiliates, LA Galaxy and Barcelona soccer fans (non-hooligan-style, but still fanatical), comic book readers (not the DC or Marvel fans whose lips get tired when they read, but the edgy cool stuff from independent publishers), lounge music aficionados, jazz club frequenters (non-hipster version), film noir fanatics, library geeks, used bookstore scavengers, audio book forums, Elvis fans (bless them everyone), boxing fans, left-handed serial killers, and on and on.

Clearly, if none of these tribes overlapped, trying to reach them all with one big publicity effort was destined to fail without reaching any of them. My efforts to get the word out about LIE CATCHERS had to be personalized and specific to each tribe. Even an email list blast - the current golden child of promotion until a new golden child comes along - needed to be tailored to each specific tribe.

How did I find this out? Trial and error. I sent out the same email newsletter to everyone in my various tribes whose email addresses reside in one big Mail Chimp list. The response was tepid - under 50% opens, under 5% click through on the book link, and let's not even talk about the percentage of actual books sold as a result of the response.

Once I rethought the process and sent separate, only slightly different, but specifically tailored email blasts to each of my tribes, the response was significantly stronger. Not champagne results, but definitely beer results. Lesson learned - targeting your tribes specifically and separately gets much better results than a one-size-fits-all approach.

Once this epiphany penetrated my Neanderthal brain, I began brainstorming specific ways to further individualizing my promotional approaches to each of my tribes. I knew there were a large number of individuals in each tribe who would be willing to shell out three buck for an e-book written by me just because they like me (yes, there are people who like me, so back off). Some of them might even stump up the fifteen bucks for the trade paperback (mostly relatives who feel obligated). But these things would never happen if I wasn't able to get them up to speed with news of the publication.

I also realized there was another factor in the publicity equation. I had to tell the members of each tribe specifically what was in it for them to part with the cost of one to three Starbucks visits. This isn't selfish on their part, it's simply predictable human behavior - a commodity, I am intimately familiar with when wrapped in the dark cloak of my day job as an interrogator (another tribe - who can't lie to each other).

So, which tribe does this column specifically target? My writer tribes are going to read this because it pertains to what all writers want to know about - successful publicity. I can also be funny, sarcastic, and irreverent with this tribe because it's part of our DNA. Members of my writer tribe might read this and then go over to check out LIE CATCHERS on Amazon (because most of us will jump at any excuse to procrastinate - it's part of what puts us in the writer tribe). They might pick up a copy (hint...hint) and maybe even leave a review after reading (another hint...hint). All writers know what they appreciate - book sales and positive reviews - and they understand karma like no other tribe (except for maybe my cop peeps).

Specifically targeting your promotional efforts to your individual tribes may not result in driving your book onto the bestseller lists, but it will move you further toward those sirens of publishing than treating all your tribes the same. We are, after all, in the age of everyone being told they are a unique snowflake. Be sure you don't address those unique snowflakes as dirty snow banks with yellow stains.